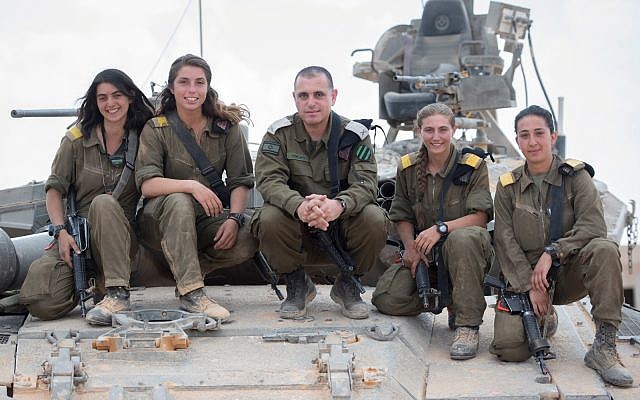 Last week, the first woman squadron leader was appointed on the very same day that some 30 religious paratroop recruits turned their backs on their female instructor. Over a thousand women volunteered for combat duty in field units this summer (double the number recorded six years ago), just when female fighters were issued orders to desist from wearing white tee-shirts during exercises and to refrain from entering swimming pools in bathing suits “so as not to offend the sensitivities of religious soldiers.” Once again, the tug-of-war between women activists and Orthodox leaders over the issue of gender equality in the military is escalating, unleashing mounting confrontation in a variety of quarters.

Amidst continued clashes along the Gaza border and intense debate over the nation state bill, how important is this issue? Why does it continue to arouse such passions and to evoke so much controversy? The answer, simply put, is that gender equality in the IDF is symptomatic of the grand questions currently preoccupying Israeli society and whose determination will affects its identity for years to come.

The service of women in the military is one of the most accurate indicators of three interlocking principles proclaimed by David Ben-Gurion over 70 years ago. The first is the ability of the Israeli state to protect its citizens by maximizing the human resources at its disposal. The creation of a unified military under state control was understood then, as it should be now, as a sine qua non of statehood: the incontrovertible symbol of sovereign independence. The IDF, of all state institutions, has become a nearly consensual official structure. As such, with few exceptions, it has been deemed above heuristic politics (explaining the still debated decision to unite all pre-independence militias under the IDF banner).

The exclusion of women from certain positions in the IDF, it is generally accepted today, denied Israel the ability to fully utilize some of its most talented citizens for its own defense. After years in which women were conscripted for mandatory service but were shunted to the sidelines in what is undeniably one of the most hierarchical, male-dominated, institutions in the country, during the past two decades most positions in the military (currently more than 92 percent) were opened up to all conscripts regardless of race, religion and gender. The rationale behind this move — prompted by several landmark decisions by the High Court of Justice (The Alice Miller petition to be allowed to compete for a spot in pilot training school being the most notable) and by ultimately successful legislation to ensure gender equality — has consistently been that the IDF must place “the right person in the right place” to maximize its effectiveness.

Most ultra-Orthodox and some religious leaders never really accepted these policy changes, arguing that there is no place for women in the military. Others insist that women detract from the IDF’s fighting capacity in the name of extraneous principles and that close proximity to women distracts soldiers from carrying out their duties. They therefore entered into negotiations with the IDF brass to ensure that their religious concerns are taken into account, thus making their service contingent on acceptance of their conditions. Two arrangements, the “Appropriate Integration” protocol of 2004 and the updated “Joint Service” understandings of 2017 are meant to regulate the interaction of male and female soldiers. There is, however, no one interpretation of these agreements, explaining the constant disputes over women in the military — especially in combat posts.

This bargaining undermines the IDF in two major respects: first it allows outside forces (in this instance, powerful national-religious rabbis) to interfere in IDF policy; and second, it permits the whittling away of the complete autonomy of the military from diverse social currents. Soldiers are subject to the discipline of their superior officers, not to that of their civilian leaders. The head of human resources in the IDF, General Moti Almoz, put it aptly several weeks ago: “No commander is allowed to decide, on his own accord, to worsen or ease military orders.” This admonition is most salient in the case of women; it also holds for attempts to infiltrate into the delicate realm of military norms (as in the case of Elor Azaria).

Chipping away at the independence of the IDF thus weakens its abilities. No country, as the upper echelons of the state are well aware, can afford such infringements on its control over the use of force without suffering severe repercussions over time.

The service of women in the military is also, secondly, indicative of the role of the IDF as “a people’s army,” which abides by the principle of equality. Compulsory draft has always been viewed as the entry ticket into full membership in the national collective. The exception of the ultra-orthodox and the non-induction of Arab — as opposed to Druze and Circassian — citizens has traditionally been used to justify their partial civic inclusion.

This perception of the IDF as the standard bearer of equality is consistent throughout Israel’s history. The achievement of gender equity in the ranks of the armed forces has, therefore, somewhat unusually in a democratic country, widely been viewed as the test of its capacity to ensure overall equality. This assertion is explicit. The latest memorandum on the subject explains: “The IDF is the army of the state and its gates are open to all parts of Israeli society — secular and religious, women and men, ultra-Orthodox, members of minority groups and volunteers. Everyone.” It is for this reason that the IDF cannot countenance any digressions from its orders on matters of discipline and appearance.

Not everyone accepts this correlation between equality and the maintenance of a people’s army. Religious leaders claim that the military cannot be used as an instrument to promote the agenda of women at the expense of other groups. They also suggest that it has become a tool of radical feminists (in the process ironically displaying immense ignorance of this stream of feminism, which studiously shuns military service in general). Others reject the preeminence of the military in nurturing civic equality. It is this complexity which is significant.

This is also why the state of gender equality in the armed forces, in the third instance, also radiates far beyond the confines of the military. The status of women in the IDF, it has always been maintained, not only reflects societal norms, it also affects these guiding precepts. The IDF has defined itself in recent years as the “standard-bearer of the incorporation of women.” While it has endorsed broad gender equity, it has also bowed to blatant assaults on the standing of women in its ranks. The Israel Women’s Network hotline for soldiers has recorded numerous instances of discrimination and blatant sexism. These have grave spillover effects into society at large.

In recent years, examples of gender segregation in state institutions, in the academic world and in the private sector abound (the exclusion of women from the production of kosher wine being one of the most egregious). So, too, have instances of intolerance towards women in the public sphere: in public transportation, on billboards, on the streets and in dress codes. The silencing of women’s voices in certain public places has become a norm, and with it the barring of some women from positions of power at the local and national levels. When women are absent from the civic landscape, equality is at risk. Democratic spaces — which not only protect equality, but also enable the realization of that justice which is its natural extension — are shrinking. This is especially true in Israel today, where the struggle for equality has become central to the definition of Israel’s very being.

The question of the terms of service of women in the IDF is not merely a feminist issue. It has widespread implications for Israel’s security, for its equality and for its social dynamics. Those who choose to ignore or belittle it do so at their peril.