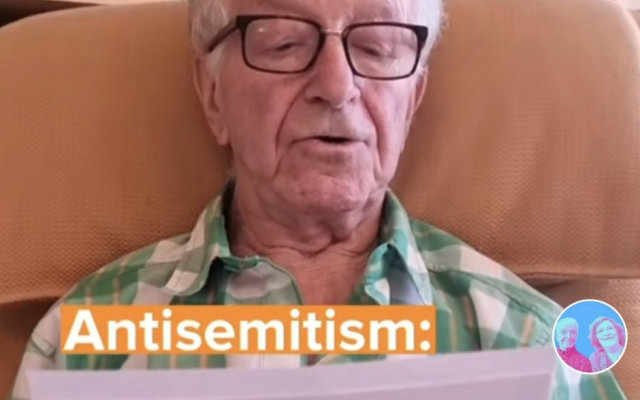 In the year plus since I created a TikTok account for my life partner, Gidon Lev, a survivor of Theresienstadt, we have gained a substantial number of followers.  Today, over 405K users of the app listen to what Gidon has to say about his experience in the Holocaust.

I should be happy, yet I have mixed feelings about this.

On the one hand, thousands of young people see the face of a Holocaust survivor and (hopefully) become more curious about Holocaust history. On the other hand, Tiktok is a very performative social media platform, which leads to my misgivings.

In the past 60 days, The True Adventures on TikTok has had more “views” than the US Holocaust Memorial Museum has had visitors – for the past four years running. But what does that really mean in real terms? Will any of what Gidon teaches really stick?

On good days, I tell myself that Gidon’s TikTok presence might be an invitation to learn more for some young people. On not-so-good days, I wonder if this is really it – the last chance – the one way we can get a young person, woefully ignorant about the Holocaust, to pay attention, even for 30 seconds. Is that what we are reduced to?

I ask myself whether teaching about the Holocaust on TikTok simply spreads the Holocaust as meme representing the ultimate barbarity. How can TikTok possibly convey that the Holocaust was not a single event, but a continuum of events that took place in forests and villages, on ordinary streets, in classrooms, and in meetings where cigars were smoked and pastry and coffee were served? Yet this continuum contains within it millions of individual experiences describing brutal suffering and loss, which echoes for generations.

And what of Gidon? He says that he finds the TikTok experience validating and energizing. (Let me tell you, the #rickjameschallenge was not easy.) He enjoys the aura of celebrity of being a major TikTok creator. He gets recognized on the street by admiring young people. He doesn’t trouble himself as I do about what this all means for the future of Holocaust education. But that makes sense. Gidon is the “talent,” and I am the producer. Gidon’s journey is inward, while mine is forward-facing.

With as many complaints, misgivings, and philosophical questions as I have, it is also true that Tiktok offers valuable insights into the rapid-paced, multi-layered conversations happening everywhere, all at once. Millions of users and their competing and sometimes cooperative, collaborative narratives create content daily.

Dominant at the moment is “social justice” and language of trauma, of reclaiming and repurposing victimhood. There is a driving need for recognition and even recompense. It should come as no surprise that over and over again on Tiktok, I see comments chiding Gidon and me to also speak about the Roma. What about the Sinti, they say. What about the LGBTQ community? What about the Armenians? What about slavery? What about Indigenous Americans?

There are interesting patterns in the comments. What about the Jehovah’s Witnesses, I have been asked. What about the three million Poles? What about the Holodomor? Demanding more inclusion regarding victims of WWII and the Holocaust has undertones, for me, of asking the Jews to please get over the fact that they were the ultimate target of the Nazis. Enough already, in other words. The Jews, some commenters have said, were repaid, though. Didn’t they get money from Germany?

Interestingly, I seldom get comments on TikTok about Rwandans, Cambodians, or Bosnians, even though these atrocities are much nearer to us on the timeline. This is likely reflective of the fact that most of our followers are Americans, for whom these genocides are not cultural memories, and these places seem far away. That is a pity – and an opportunity to do better as educators.

What does it signify to us that 66% of millennials don’t know what Auschwitz is? Have we failed? Or do we need to rethink how we pass on this terrible knowledge and for what purpose? The Holocaust towers over other atrocities in its sheer scale, yet is rapidly receding into an abstract yet potent meme. What are we do to with that?

Holocaust educators are tasked with processing all of this and making the Holocaust mean something to young people today. Not that the Jews are the forever winners of the Victim Olympics, but that there is much to understand here about how ordinary people can be so thoroughly convinced that a radical tear in the social contract is not only permissible but desirable and even necessary. That tear might look like January 6th in Washington, DC, or it might look like Bucha, Ukraine. It might look like a million smaller acts that aggregate and gather momentum until they make landfall with horrifying results.

For Jews, this intense cultural period of identity politics, empowerment of victims of trauma, and reclaiming narratives is once again a time when particularity and universalism reappear as a litmus test of how we see ourselves in the world. And now, how the world sees us on Tiktok.

About the Author
Julie Gray is a writer and editor who made the leap from Los Angeles to Israel many years ago and has had many (mostly) humorous adventures ever since. She is the author of The True Adventures of Gidon Lev: Rascal. Holocaust Survivor. Optimist.
Related Topics
Related Posts