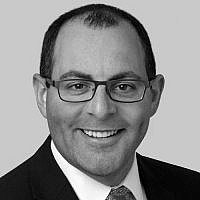 The Blogs
Brett Abrams
Apply for a Blog
Advertisement
Please note that the posts on The Blogs are contributed by third parties. The opinions, facts and any media content in them are presented solely by the authors, and neither The Times of Israel nor its partners assume any responsibility for them. Please contact us in case of abuse. In case of abuse,
Report this post. 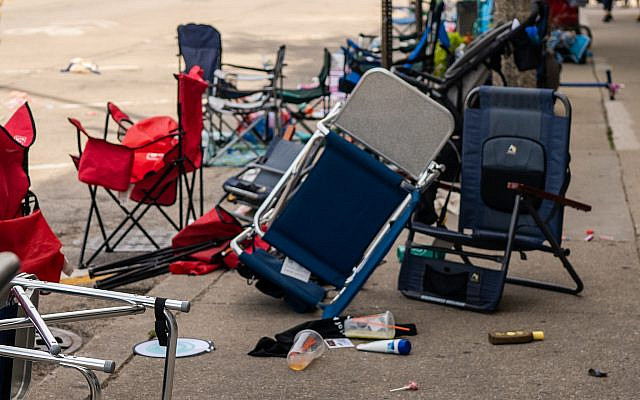 The view of where we were sitting alongside the parade route, after emerging from shelter in a local business (courtesy).

Just a mere two miles from our house, we attended the Highland Park Independence Day Parade. It’s always a highlight of how we celebrate the 4th of July holiday, and we were excited to be back after the pandemic kept it away for the past two years. My family had just settled in alongside the parade route to see the mayor, policemen, and firemen walking by waving. Suddenly, dozens of loud popping noises; the sound of 70+ shots ring out from an MP-15. I yelled a word I never would have imagined needing to yell in this country from a place of absolute panic.

“RUN!” I screamed to my wife and my kids. Amid the chaos, we grabbed our kids and ran as fast as we could. We hid out in the bathroom of a local business that so generously opened its doors to my family and to many others. Eventually we sprinted to our car and returned safely to our home. We were the lucky ones.

After the dust settled and my mind shifted away from the horror of the event, I began to process. Just a month ago, we took our first family trip to Israel after two long years of COVID postponements. In our incredible three weeks, some of the activities we enjoyed:

All of these places at one time or another posed real threats to Jews who choose to live there or visit. Yet just hours after the shooting, my wife came to a terrifying realization: “We were safer a month ago near Israel’s borders then we were two miles from our own house”.

Like many Jews who live in the diaspora, we have dreamed about the possibility of making Aliyah one day. We have studied abroad in Jerusalem, we have a community of friends who are raising families in Israel, and we feel that our children would eventually acclimate to Israeli life. We know that Israel has its own challenges. The one thing that always held us back was that in our sub-conscious, the thought of needing to run to the closest bomb shelter to protect our children because of a choice we made to live in Israel was too hard to overcome. The uneasiness of going to beaches, soccer games, or the movies that could be a target for terrorism. Soldiers openly carrying firearms in broad daylight as a constant reminder of the risk that we may face living in our Jewish homeland.

Any fear that we had for living in Israel was extinguished last week after enduring our first mass shooting in the United States of America.

I have always had a deep-rooted love for my country, and I am blessed to have been born as an American. There are parts of our identities that will always be tied to the United States. I recognize it’s natural to possibly over-react to an unthinkably awful week at home against the backdrop of a wonderful family vacation in Israel. Recognizing the emotional turmoil that we were going through, I engaged in some candid analysis around the differences in safety between the United States and Israel. The facts are startling.

According to World Population Review in 2022:

Then there is the question of what it’s like to live as a Jew in the United States today. While there is no direct evidence of anti-Semitism (yet) being a driving force of the Highland Park massacre, it was the very first thought that came to the minds of many in the immediate aftermath of the shooting.

With the awful experience of the mass shooting, and with the glaring statistics showing that my family may be less safe here than in Israel, I continue to circle back to the question on so many people’s minds: Is there hope it can get better here?

The response from the community has surpassed the challenge laid before it. The first responders, the counselors, the teachers, the community leaders, the local officials have all gone so far above and beyond that we can’t help but be hopeful. The outreach from family, friends, and colleagues not just in the aftermath, but days after has helped us to cope with the shock of this terrifying experience. There is a welcome and necessary global focus on the stories of the people who were murdered and on those who were horribly injured, along with an outpouring of support for their families. We are fortunate that the community was well prepared, properly resourced, action oriented, and determined to heal. I believe that it will get better.

What would our lives look like if we went to live in Israel? This is what we used to ask ourselves.

Now we ask ourselves: Is it time for us to go?

A special thank you to Mimi Sager Yoskowitz in helping me to shape this post.

About the Author
Brett Abrams is a Jewish husband and father of three living in the suburbs of Chicago. Born in Minneapolis, Minnesota, Brett is an avid sports fan, golfer, music lover, active in his community and Conservative synagogue. He attended Camp Ramah in Wisconsin, Ramah Seminar, and Herzl Camp. He graduated McGill University in Montreal and DePaul University in Chicago. Brett is a Certified Public Accountant and works in the Commercial Real Estate space.
Related Topics
Related Posts