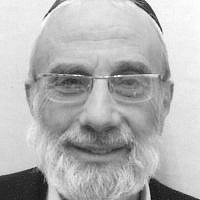 The Blogs
Shmuel Lemon
Apply for a Blog
Please note that the posts on The Blogs are contributed by third parties. The opinions, facts and any media content in them are presented solely by the authors, and neither The Times of Israel nor its partners assume any responsibility for them. Please contact us in case of abuse. In case of abuse,
Report this post.

G-d says that preservation of life takes precedence over all other considerations whatever they maybe.

Preservation of life means not saying, “that the virus might disappear through a miracle.”

Preservation of life means not saying,” This is like a flu.”

Preservation of life means not saying, “they recommend it [wearing a mask] I just don’t want to wear one myself.”

Preservation of life means not saying,” I don’t take responsibility at all,” and so many more such statements.

You may say that quitting the Iran deal is also considered preservation of life.

But look at the difference.

The Iran deal could cause death. That’s about what may happen in the future.

Covid has caused death yesterday, is causing death today and will G-d forbid cause death tomorrow if there’s no change of attitude.

There’s no question, no doubt in anyone’s mind, the concern for what is happening at this present moment supersedes any worry of what may happen in the future.

So isn’t voting for someone who says all of the above forsaking G-d?

So isn’t voting for someone who says all of the above voting against G-d?

You may not want to vote for the other candidate. Ok

About the Author
Shmuel Lemon has been a communal orthodox Rabbi, teacher, educator and engaged with the Jewish community; presently residing in Edgware England. He had a chareidi background but now considers himself to be a plain orthodox Jew. He has experienced the pulse of today’s adults having being involved with different communities from different backgrounds especially in Israel and Johannesburg. He can be contacted at shmuellemon@gmail.com
Related Topics
Related Posts
Comments