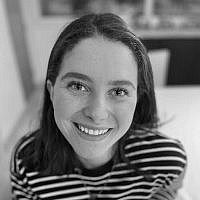 The Blogs
Hannah Pollak
Apply for a Blog
Advertisement
Please note that the posts on The Blogs are contributed by third parties. The opinions, facts and any media content in them are presented solely by the authors, and neither The Times of Israel nor its partners assume any responsibility for them. Please contact us in case of abuse. In case of abuse,
Report this post.

I recently found myself in a room where the statistics of assimilation were being shared with a group of non-Orthodox high school graduates. The numbers were gloomy. They were meant to be dramatic and move the people in the room, but tragically they were also true. After presenting the facts, we were asked to share our long-term commitment to Yiddishkeit, what we would do to prevent that we, our children and grandchildren would be part of those less than promising statistics.

The response from the students was bittersweet, but extremely eye-opening to me. Fortunately, I can say that none of us was indifferent about our own and our children’s Jewish identity. At least on the surface, all of us cared. All of us wanted to be affiliated to the Jewish people in some way or another. However, not undermining the value of what I mentioned above, there was something disturbing about their responses. At the outset, let me clarify that this is not G-d forbid to blame the students; they indeed answered to the best of their ability. This is not to blame anyone. Massive communal ignorance is often intergenerational and multi-causal, and thus, it’s hard to say that someone in particular is at fault.

Their long-term commitment to Jewish life mainly centered in being together with their families Friday night, being leaders of organizations such as Zionist youth movements, transmitting Jewish ideals to their children, supporting the State of Israel, standing against antisemitism, etc. While the responses were inspiring and definitely significant, I am afraid to say that they are not safe measures to prevent one’s own assimilation and even more so that of one’s children. I would like to claim that the responsible way to fight assimilation is via an overall commitment to Torah education and mitzvot.

Yes, I know that as an Orthodox young woman myself, my claim might sound presumptuous. As if I’m saying “my way or the highway.” But it’s not. As a human being I acknowledge that my own religious life is full of inconsistencies, contradictions and struggles. I am not even grounding my assertions on the success rates of different Jewish movements during this and the past century; I am not (only) saying that on a pragmatic level being Orthodox is a more efficient way to combat assimilation. Rather, I’m trying to argue and prove that on a root-level, on an essential note, Torah and mitzvot are the very definition of the Jewish people. In fact, Zionism, communal activism, the value of family, etc. are all expressions of our core definition: The commitment we made at Sinai.

This is not little me saying it. On a historical level, it’s well-known that the Jewish People was founded either at the time of the Exodus from Egypt or during the Sinaitic revelation. If you hold by the latter, it’s obvious that what defines us is the acceptance of the Torah and her laws. But even if you think that the Jewish people were born at the Exodus, you still have to keep in mind that we were not redeemed from Egypt to wander in the desert. G-d took us out of Egypt so that we would receive the Torah and eventually keep it in the Land of Israel. Moreover, on a conceptual note, the chosenness of the Jewish people is only based upon the giving of the Torah. As we say every morning, “He chose us from all the nations, and gave us His Torah.” As we say every night, “With an everlasting love You have loved Your people; Torah and mitzvot, statutes and laws You have taught us.” In Rabbi Saadiah Gaon’s words “our nation is only a nation because of its Torah” (Emunot veDeot 3:7).

Some of us want to preserve our Jewish identity by affiliating to Jewish organizations, Zionism or the like. Yet, if our desire to defeat assimilation is authentic, we must know at least what authentic Judaism is. In the words of the Kuzari, my intentions might be pure, yet my actions are misguided. For example, someone’s intentions to be a madrich (counselor) in a youth movement that endorses chilul Shabbat (desecration of Shabbat) can be pure and aim to fight assimilation.  Indeed they can be very successful in engaging the chanichim’s Jewish identity. However, institutionalized chilul Shabbat (I am not speaking about one’s individual life-long journey toward adherence to Halacha) is literally an oxymoron to genuine Judaism. An institution that does not subscribe to the laws and values of Sinai (and by extension to the authority of the Sages), might have a very sweet and strong Jewish flavor, but can’t be Jewish on an essential level. Very bluntly, as valuable as Zionism, social justice, family Friday night dinner, or even gefiltah fish are, they are only genuine expressions of Judaism because they are grounded in Torah and observance. I feel that today, in our postmodern world, we are afraid of saying that one expression of Judaism is more legitimate than another. While I agree that many have sincere motives, it’s deceiving and inaccurate to say that an expression of Judaism that contradicts the Torah is legitimate.

I am not arguing that everyone should be told to keep Shulchan Aruch in its entirety. Even more so, not from one day to the other. What I’m trying to tell myself, someone striving to strengthen her own Jewish identity and hopefully others’ as well, is that what truly anchors a Jew to his or her Jewishness is commitment to Torah and mitzvot. This is true on a practical level and definitely on a metaphysical and subconscious level as well. What protects me and my children from the “White Holocaust” are mitzvah observance and Talmud Torah. Still, this is not an all-or-nothing model. It’s about promoting the importance of Torah study and the observance of mitzvot (even isolated mitzvot, as Chabad pushes for so much) and embracing each one’s different learning processes. It’s also not about creating a condescending attitude among Orthodox Jews. Quite the opposite. It’s about realizing that Judaism is not an elitistic religion. Judaism claims that mitzvot are binding to all Jews and that Torah is everyone’s heritage. Torah and the centrality of Talmud Torah belongs to every Jew–regardless of their gender, social status or intellectual capability.

Just as many of the leaders and educators today manifest that education in Orthodox circles over-emphasizes learning and Halacha, divorced from an intimate connection with G-d, perhaps outreach today is de-emphasizing Talmud Torah and the binding nature of Halacha. In fact, it is forbidden to speak and rebuke if the recipient will not receive your words. I’m not saying that we should be teaching Hilchot Borer or Hilchot Tzniut to those who come to an outreach event for the first time. However, I believe that everyone deserves to know the truth. Everyone should be told, in a clear and not condemning tone, that to be a good Jew one has to commit to Torah and mitzvot, even if it’s one mitzvah at a time. On that note, I want to express my frustration when I see that sometimes, the content that is transmitted in outreach forums is not Torah. I don’t know how often I would have to say a Birkat HaTorah before reading an article from a kiruv platform. Instead of sharing the invaluable original Divine guide for life, we try to fight assimilation with positive psychology, Jewish folklore and culture, influential and inspiring Jews… If we sum up all the content that is given over for the sake of kiruv—lectures, articles, inspirational videos, social media posts, etc. how much is actually Torah that’s geared to advance Jewish practice and understanding, and how much are derivatives of Judaism with a Jewish (or Israeli) flavor?

Let me end with the words of Ishay Ribo based on the words of the prophet (Amos 8:11) and the teachings of Chazal (Shabbat 138b).

Not hungry for bread,

Not thirsty for water…

Only for words of truth that satiate the heart.

We’re not thirsty for water or hungry for bread. We’re just desperate for words of truth that satiate the heart. We don’t only want cool connections between current events and the weekly parsha. We don’t only want to know about Queen Elizabeth and her relationship to the Jews. We don’t want to know about famous Jewish artists. We’re not even only interested in how modern psychology borrowed ideas from Jewish age-old wisdom. That’s all interesting, but it’s not all we want. We want it. The real deal. We want Torah. Both heartwarming and sophisticated, pure unadulterated Torah.

About the Author
Hannah Pollak is a college student pursuing a career in Jewish education. She was born and raised in Chile, South America. Today, she lives in New York, where she is learning Torah and getting a degree at Stern College for Women.
Related Topics
Related Posts
Hannah Pollak