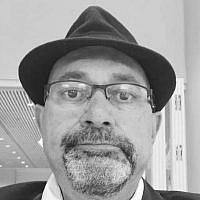 The Blogs
Mark Blumberg
Apply for a Blog
Please note that the posts on The Blogs are contributed by third parties. The opinions, facts and any media content in them are presented solely by the authors, and neither The Times of Israel nor its partners assume any responsibility for them. Please contact us in case of abuse. In case of abuse,
Report this post.

Singing Hava Nagila in Israel, you may be surprised to know, is sometimes considered as essential as practicing medicine.

During the corona crisis, this country impressed many around the world with its vaccination efficiency, but there’s another jewel in the Israeli crown: the humanitarian approach to the elderly.

Since the lockdowns began, the Ministry of Health has given musicians like me who perform in retirement homes the same essential worker permits as those given to doctors and other medical staff.

For the past 11 years I have been performing regularly at retirement homes, and the coronavirus hasn’t stopped me. While most artists, singers, actors, and musicians have been laid off I have continued to work. Armed with a plastic ID card and a letter to get me through the road blocks, I travel almost daily from one retirement home to another.

It’s always been a satisfying experience to bring smiles to people who are in such need for attention and entertainment, but it has been especially important during this period when they have been cut off from their families.

But a mission of this kind is not without its challenges.

Just last week I discovered in one center that not all the piano keys worked on a newly acquired piano. I struggled throughout the gig, only to discover afterwards that a resident had stuffed a sweater between the hammers and the strings.

Then there’s the need to maintain 3 meters distance from the audience, which can be a problem when residents get excited by the music and approach me while I am playing. They usually don’t understand why I stop playing and move away.

But it works out in the end. When I turn around and see them dancing and singing it’s a very rewarding feeling.

Studies have shown that music is the last thing to go as our memories weaken, with the first things we remember from early childhood being the last to go.

This is quite accurately portrayed in Stanley Kubrick’s 2001 A Space Odyssey, when astronaut Dave Bowman (Keir Dullea) is disabling the memory of HAL the computer and HAL starts to sing Daisy, Daisy—the first song he was taught.

On some occasions I have seen residents who I have been told are non-responsive suddenly responding to my music, even singing the words, and remaining responsive for a while after. Guess what -Daisy Daisy is one of the many songs I play that get a response.

Each place has its own special requirements: In Modiin there are many French residents, so I play and sing Edith Piaf but the same doesn’t go down well in the South African home in Herzliya.

And I’ve learned that you can’t please all the people all the time. In Modiin, there’s one resident who wants really soft music. Fortunately, he tends to leave early and that’s when I go full throttle on the gas.

There also are those residents who come up to me while I’m playing and assume that I can converse with them while singing and playing. All I can do is just keep on singing, until they realize that oh, he can’t talk and sing at the same time. Don’t worry they will make the same mistake next week.

In Herzliya, one of the old ladies often exclaims: “oh no, not you again, hope you have some new songs today, we don’t want to hear the same old songs”.

For some reason, it’s usually the ladies who are more excited to see me. I never considered myself as a sex symbol, but I guess at 62 years young, single and dapperly dressed in a tux, and playing a lot of romantic songs, I must be quite attractive. When I was 14 years old, I fantasised about being a rock star and having the girls throw their panties at me. Well today that would be my worst nightmare.

One of the activities directors told me that during this lockdown, when the elderly cannot touch, hug or see their families, someone like me who is spreading a bit of joy really is doing something important, or, as the authorities would say – essential. 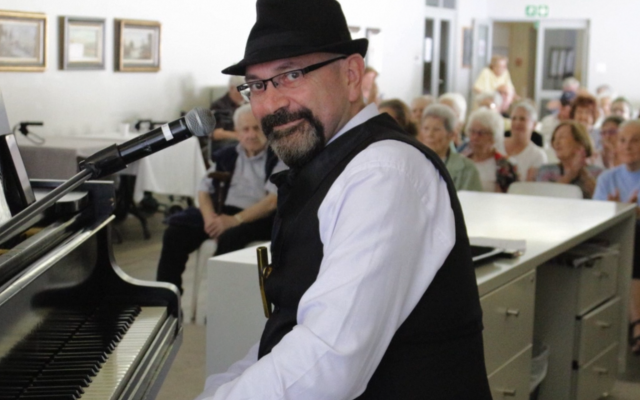 Mark Blumberg. (Simon Shiffman)
About the Author
Mark immigrated to Israel in 1987 and composes music. He had a No. 8 hit in Slovakia 2009, a song recorded by Miro Jaros. Writes about general topics.
Related Topics
Related Posts
Comments