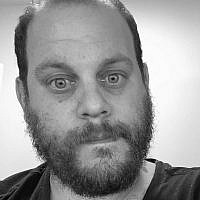 The Blogs
Guy Goldstein
Apply for a Blog
Advertisement
Please note that the posts on The Blogs are contributed by third parties. The opinions, facts and any media content in them are presented solely by the authors, and neither The Times of Israel nor its partners assume any responsibility for them. Please contact us in case of abuse. In case of abuse,
Report this post. 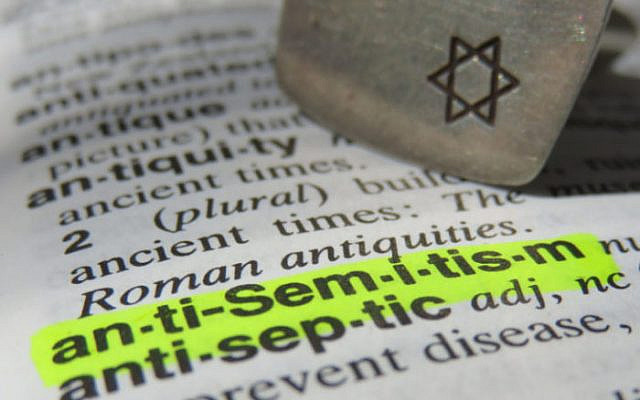 Dictionary.com is one of the most visited websites on earth with millions of views per month and is considered a trusted information source. It is given prioritized page placement by Google around the world as the “official” dictionary used in Google’s results. As such is one of the single most important information sources in the modern world.

So when you hear that Dictionary.com is being antisemitic it’s a claim that the Jewish community best take seriously.

This claim has once again come front and center in the online Jewish debate as people are noticing the challenging definitons applied to the word “Jew”. 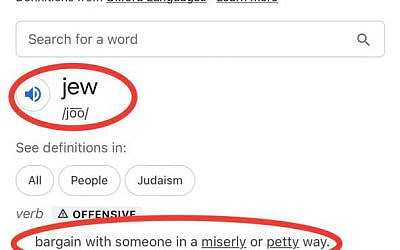 When taking umbrage with a definition we must first assess the role of a dictionary in the world. A dictionary should be an impartial source documenting the use of language as it appears in the world.

Keeping in mind the role of a dictionary in society, and the precise definition given, this “incident” can not and should not be treated as antisemitic. Sadly, this is indeed an antisemitic use of the word jew as a verb which IS in common use in some communities. It is also clearly labeled as being “offensive”, which it is. So, in this particulary instance Dictionary.com were not acting in an antisemitic way.

So it’s settled then right?

As is so often the case, an easily disproven claim of antisemitism can be used to shield an organization from a much deeper antisemitic rot.

While the boorish antisemitism of the 1950’s may still be considered repugnant in polite society, “antizionism” is its high-brow cousin who is welcomed at all the best parties.

Diving deeper into the site it becomes clear that a number of definitions on Dictionary.com which relate to Israel and the Jewish people appear to be include misinformation, which is irrelevant, factually inaccurate, or both, which all seem to indicate a particular political or ideological view of Israel and the Jewish people being prioritized over accurately delivering the definition of words.

Take for example, the definition of the word “Jeroboam” in which the “Top Definition” is seen here.

Here the first definition is: “The first king of the Hebrews in N Palestine.”

While the error is subtle it is clear, the Northern Kingdom of Israel (circa 900 BCE) has been replaced with “N Palestine”. This “corrected” statement is factually inaccurate even in the most generous interpretation since the name “Palestine” was only applied to the region following the Roman conquest in 70 CE.

Dictionary.com sources this information as being in the biblical Book of Kings, yet a quick review of an English version of the Book of Kings (again giving the most generous interpretation) shows the name “Israel” used 21 times in reference to Jeroboam and “Palestine” used 0 times.

A quick Google search for “Kingdom of N Palestine” and “Kingdom of North Palestine” reveals that this particular way of describing ANY geographical region is only found in a single text called Judah’s Sceptre and Joseph’s Birthright by Rev. J.H. Allen. A treatise proclaiming “British Israelism”, another replacement ideology aimed at claiming the “crown” of being the “real Jews” this time in the name of the Anglo-saxons .

This raises a simple question: Why is Dictionary.com presenting as its “Top Definition” for an ancient Israelite king, a definition which is historically inaccurate, factually inaccurate, and heavily biased in relation to a modern political conflict?

To avoid being hysterical or hyperbolic, I decided to investigate this issue further. 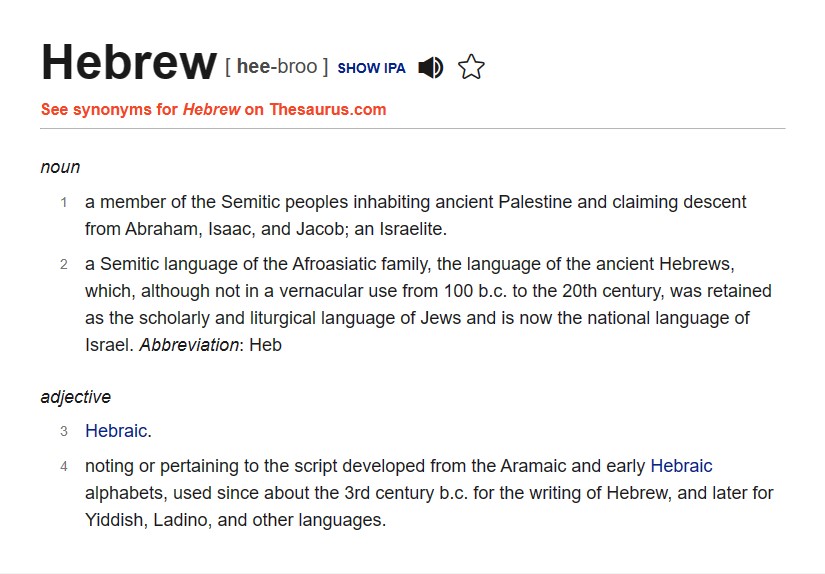 Here again we see a number of factual and historical inaccuracies. The most political being “people inhabiting ancient Palestine” in spite of the Hebrews predating the term Palestine by several thousand years.

Further, in the historical context of definition 2, the minimization of the continuity of the Hebrew language is a common trope applied to attempt to decouple modern Jews from their ancient ancestors in spite of all historical, scientific, and archaeological evidence to the contrary.

Finally the statement that it was not used in a vernacular from 100 b.c. (BCE) to the 20th century presents a further factual inaccuracy since even in the mythology the “revival” occurred in the 19th century, but academics have demonstrated for over 40 years that Hebrew had been spoken prior to 1882 and the modern revival.

This pattern continues through the definition of Israel where the “Top Definition” happens to be the one which includes the qualifier on Jerusalem as it’s capital “but not recognized by the international community” which is both not true, and a standard of selecting one’s capital not applied to any other nation and is therefore subject to the “double standard” definition of antisemitism under the IHRA. 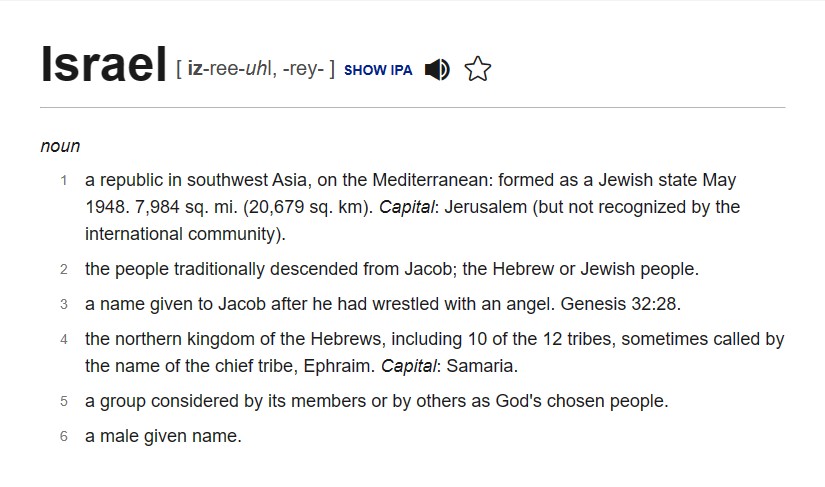 To validate the hypothesis, I examined the definition of Palestine. Here we see that the selected “Top Definition” appears to be far less critical and far more generous in its definition. 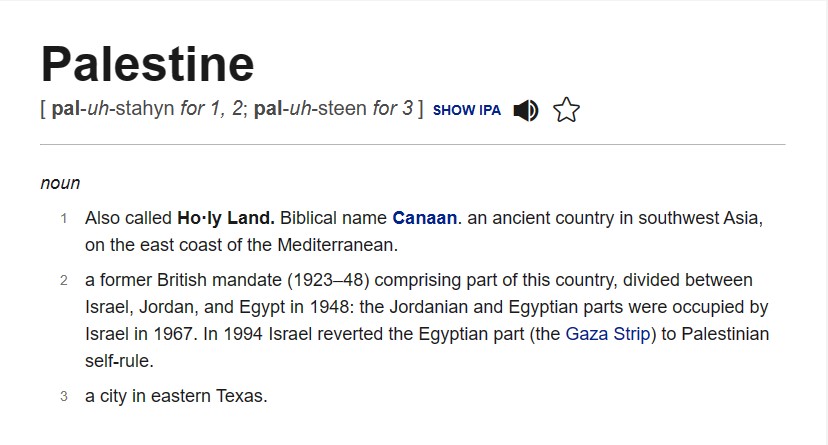 Here we can see the inclusion of a generous “Also called Holy Land”, an unnecessary inclusion of favorable information which, in an unbiased interpretation, is at least as valid to include in the definition of Israel. As well as providing a misleading biblical reference (since the land was referred to as Canaan only at the very beginning of the Bible after which the Bible declares that it is the kingdom of Israel.) This selective inclusion is once again contrasted with the “republic… formed in May 1948” applied to the definition of Israel.

When reviewing “How to use” the word “Zionism” the top result offered is an excerpt from a critique of Zionism accusing it of being oriented around the dehumanization of an identity which Zionism predates by more than half a century.

This Orwellian manipulation of the dictionary to subtly rewrite history by rewriting language based on this demonstrated pattern of political bias, antisemitism, and misinformation raises a question which is far broader than just the effect on Jews today:

In a time where combating online misinformation and hate speech has become one of the most important issues facing both corporations and governments around the world, is there any room for a critical site such as Dictionary.com to be able to openly publish both, and should this be amplified by Google as its preferred source of definitions?

I’m sure we can expect an announcement from the EU, the UN, and the US government and their relevant antisemitism czars in short order.