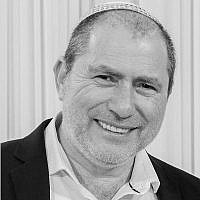 The Blogs
Chaim Silberstein
Founder and President of Jerusalem public diplomacy org Keep Jerusalem
Apply for a Blog
Advertisement
Please note that the posts on The Blogs are contributed by third parties. The opinions, facts and any media content in them are presented solely by the authors, and neither The Times of Israel nor its partners assume any responsibility for them. Please contact us in case of abuse. In case of abuse,
Report this post.

In a statement that seems to not have been reviewed before being issued, the EU declared without qualification that Israeli evictions of illegal Arab squatters on Jewish-owned property and demolitions of illegal structures on public land are “illegal under international law.” It could be that the EU is unduly distracted by the possibility of a Russian invasion into Ukraine, placing it on the borders of major European nations. But this is no excuse for making unfounded declarations regarding one of the most incendiary hot spots in the world: the holy city of Jerusalem.

The subject of the EU announcement was the execution of a five-year-old court-approved confiscation order of land, widely and violently protested by local Arabs. The land has been designated for the construction of six child-care centers and a special-needs school for the local Arab population. Could it be that the Israel cares more for its Arab residents than they themselves do?

In condemning the eviction, the European Union issued a statement similar to one it issued a year ago when Israel evicted a long-squatting Arab family from Jewish-owned property. The previous statement claimed that Israel is an “occupying power” in Jerusalem, and termed Israel’s settlement policy “illegal under international law.”

In what is possibly the only truism in the statement, the EU said that the continuation of Israel’s settlement policy “undermines the viability of the two-state solution… and seriously jeopardizes the possibility of Jerusalem serving as the future capital of both States.” This evaluation, seemingly meant as a warning, is welcomed by the majority of Israelis and even, according to polls, many Arabs in Jerusalem.

The Jewish People’s inalienable right to the Land of Israel is not only Biblical, but is rooted in internationally recognized legal treaties and documents beginning a century ago. In July 1922, the League of Nations, predecessor of today’s United Nations, voted unanimously to approve for a Jewish state the territory outlined for this purpose at the San Remo Conference of 1920. The document begins: “Whereas recognition has been given to the historical connection of the Jewish people with Palestine and to the grounds for reconstituting their national home in that country…”

It laid down the Jewish legal right under international law to settle anywhere in western Palestine, i.e., the area between the Jordan River and the Mediterranean Sea. This includes what some today call the West Bank (of the Jordan River), but is widely known as Judea and Samaria.

Article 6 actually encouraged “close settlement by Jews on the land, including state lands and waste lands not required for public use.” This clearly indicates, as author and expert Eli E. Hertz has written, that not only is Israeli control over these areas not illegal, but that international pressure on Israel to withdraw from them is illegal!

The United Nations, after taking over the authorities of the League of Nations upon its formation, then reaffirmed these terms.

International law expert Dr. Jacques P. Gauthier of Canada wrote his doctoral thesis on the legal status of Jerusalem. His conclusion, after 1,300 pages and 3,200 footnotes is that the world community of nations granted the Jewish People irrevocable legal rights to Jerusalem, and to the entire area west of the Jordan River, in a non-broken series of treaties and resolutions beginning with the Balfour Declaration and the San Remo Conference, as well as affirmations by the League of Nations and the UN.

As such, all claims that the Arabs deserve a state in Judea, Samaria and Gaza are groundless. For, as Dr. Gauthier often repeats, the legal principle of “la chose jugée” (judged issue) means that once the issue was decided, as it was in the above councils, it becomes irreversible and forever binding in a “sacred trust.”

After the UN was formed, seven Arab armies invaded the land, seeking not only to wipe out the Jewish presence there, but also to prevent the establishment of a Jewish state, in opposition to the UN’s stated intention. “Israel’s War of Independence in 1948 was considered lawful and in self-defense,” writes Hertz, “as may be reflected in UN resolutions naming Israel a ‘peace-loving State’ when it applied for membership at the United Nations,” by both the UN Security Council and General Assembly.

No changes in the legal status of the land were made by the time, less than 20 years later, that Arab armies tried again to destroy Israel. This became the Six Day War, which finally left Israel in control of, inter alia, Judea and Samaria – and able to implement its aforementioned rights to settle it.

Even if San Remo and the UN are ignored, Prof. Hon. Stephen M. Schwebel, former President of the International Court of Justice (ICJ), makes very clear that Israel’s military activity during this war was purely defensive, and that “a state acting in lawful exercise of its right of self-defense may seize and occupy foreign territory, as long as such seizure and occupation are necessary to its self-defense.”

Judea and Samaria was administered by Jordan (recognized as sovereign there only by Great Britain and possibly Pakistan) between 1948 and 1967, during which period it was populated by Arabs with no recognized national entity [nor could there have been, as their national rights to the area were purposely left unrecognized]. In light of all the above, Schwebel and other experts agree: Israel has the best legal title and claim to Judea and Samaria.

Perhaps the European Union would like to consider no longer repeating the canard that Jewish settlement of the Land of Israel is illegal under international law. One hundred years of history say the EU is wrong.

About the Author
Chaim Silberstein made Aliyah from South Africa over 40 years ago and is a graduate of Hebrew University with MBA, and of Yeshivat Beit El. He was a combat Medic in the IDF and worked in High Tech, Real Estate and Government in senior positions. He is currently founder and president of Im Eshkachech - Keep Jerusalem: an education, Hasbara and policy research organization, dedicated to Jerusalem. He is a resident of Beit El, member of the Beit El local city council. He is married to Liora, blessed with 7 children and is an avid squash player
Related Topics
Related Posts
Comments