Nearly 50 years ago, professors of ecology Paul and Anne Ehrlich produced a powerful and provocative polemic, “The Population Bomb,” in which they claimed that the earth did not have the capacity to support the earth’s population along with its excessive consumption. Since then, additional scholars of various disciplines have made similar claims – that the earth possesses finite resources and a finite ability to absorb our waste. Depleted soils and groundwater, rapidly disappearing ecosystems and their associated biodiversity, and the accumulation of greenhouse gasses in the atmosphere and plastics in our oceans all constituted proof of such global limits. Too many people were and are consuming too much.

While there remains much debate around defining global limits (how many people and at what levels of affluence?) and some prefer to point fingers regarding our environmental woes elsewhere (dysfunctional political systems, fear of new technologies, inequitable distribution of wealth, lack of a harmony with the earth), multiple human-driven environmental stresses suggest that we are in fact undermining the earth’s ability to maintain our current population at our current levels of resource consumption.

This has never been a popular claim, as it suggests the need to cut back, make due with less, or give something up. No one likes hearing that they are doing something wrong, especially when they derive comfort from that something (my car, my steak, my trip to Los Angeles…).

Israelis are no exception. After all, nearly 100 years ago the British told the world that Palestine could not support more people beyond its population at that time. They sent several scientific delegations to Palestine during the 1920s, 30s and 40s to assess the “carrying capacity” of the region and their conclusions were that the land – with its limited water and arable land and no other natural resources – was full (and thus no large-scale Jewish immigration could be allowed). Ben Gurion and the Zionist leaders would have none of that, and they brought their own scientific advisors to argue the opposite. Now many Israelis look back and suggest with disdain that anyone claiming that the country has population limits will be proven wrong, just as the British were proven wrong.

Professor Alon Tal of Ben Gurion University has jumped with two feet into this debate. He has produced a thoughtful opening shot to catalyze a community discussion that has been, in his eyes, taboo for too long. The book’s provocative title leaves no suspense regarding Tal’s opinion: “The Land is Full: Addressing Overpopulation in Israel” (Yale University Press, 2016). (Full disclosure – I am a colleague of the author and am cited in the book). 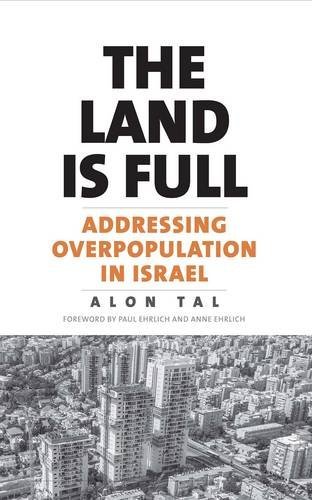 Tal presents what he sees as evidence of overpopulation in Israel, drawing from social, health and environmental realms. To Tal, overworked police, hopelessly backed up courts, over-run nature reserves, traffic jams and 40 children per classroom all constitute indicators of overpopulation, alongside the more widely used environmental indicators such as habitat loss, rise in greenhouse gas emissions, and water depletion.

Some may dismiss or debate the scientific arguments brought to the fore by Tal. Others will dismiss suggestions of too many people by claiming that our religion demands of us to produce children, and the more we produce, the more we fulfill our obligations. And since the land was promised to us, the land will provide for our needs (just look – we discovered natural gas!). Still others will suggest (sometimes correctly) that any discussion of population stress is a smokescreen for a more insidious agenda.

Tal addresses each of these arguments and more. In fact, what makes Tal’s book truly unique is that he is not content to merely build an argument using statistics or research drawn from the natural sciences. He goes straight to the heart of the very communities for whom population growth is sacrosanct (or at least habit) and he discusses the issue with community representatives. He spends time with Orthodox rabbis and Haradi community activists. He meets with Bedouin citizens and with Palestinians over the green line. He raises his opinions, listens and documents their arguments fairly and extensively, even while providing his own cogent response.

In short, this book opens a dialogue on a very contentious, but absolutely crucial, contemporary issue. Tal writes with sensitivity, respect and poise, and also with resolution, and this is precisely how argument and debate should take place in civil society. This is also why everyone with an opinion on the matter – including scientific critics and knee-jerk talk-backers, should invest the energy and read the book. Yes, he advocates ceasing population growth in Israel, but no, he does not advocate the totalitarian policy tools that his detractors will immediately conjure up.

The task of reading “The Land is Full” is made less demanding due to Tal’s friendly and accessible writing style (despite his penchant for using GRE vocabulary words). What is at stake is the well-being of the region’s current population, the land and future generations. That should be worth investing a few hours of reading and thinking.