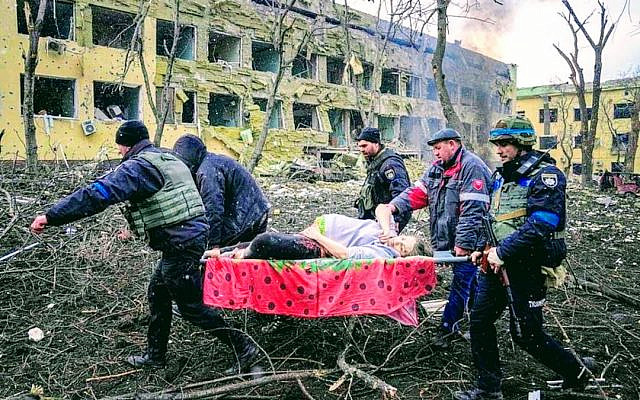 Day 17 of the Russian invasion of Ukraine, and the wanton death and destruction continues to ratchet up. Ukraine’s only offense is wanting to be free, democratic, and allied with other Western nations in self-defense. The Russian bear will have none of that.

Aside from conventional weapons of war, including missiles, rockets, and artillery, Russia is presumed to have used prohibited cluster munitions and vacuum bombs, pummeling Ukrainian cities, infrastructure, and innocent people. Moreover, Russia threatens to further escalate with nuclear weapons and conducts false flag operations to potentially justify use of chemical and biological weapons. Additionally, three rounds of negotiations have failed. As far as Russia is concerned, for Ukraine, as it was for Grozny, it’s either capitulate or die!

The great irony is that in 1994, after the dissolution of the Soviet Union, the great powers of Russia, the U.S., and the U.K. signed a treaty (the Budapest Memorandum) with Ukraine that if the latter gave up the thousands of nuclear weapons stationed on their soil by Moscow then Ukraine would be guaranteed security. Well, we see what that piece of paper is worth!

Just 20 years later, in 2014, Russia attacked Ukraine annexing Crimea and occupying the “separatist” Donbas region in Eastern Ukraine. Since then 14,000 people have been killed in ongoing fighting and more than a million have been displaced. Greeted then by some more or less meaningless sanctions from the West, and otherwise general appeasement, Russia was given a free pass to proceed in 2022 with a full-scale invasion of Ukraine. With virtually all major Ukrainian cities (such as Kyiv, Kharkiv, and Mariupol) under attack, the death and destruction is rampant with thousands killed, 2.5 million made refugees, and 202 schools, 34 hospitals, and 1,500 residential buildings damaged or destroyed already. Russia even went so far as to bomb a maternity hospital, as pictured above. Adding to those atrocities is Russia’s shameless bombing of a Ukrainian nuclear research center that could have unleashed a “large-scale ecological disaster.”

When it comes to Russia’s real world military fighting doctrine, no one and nothing is safe until their objectives are met, even if that means World War III, as Russia’s foreign minister has stated. Russia is already formidable and the largest country in the world with 11% of the world’s landmass, and that is almost double that of the next largest country. Further, with a solidifying partnership of superpower countries Russia-China, coupled with alliances with authoritarian regimes of Iran and North Korea, an extremely dangerous Axis of Evil is developing that may soon threaten global stability and peace. Many are starting to question whether we are now entering the times of Gog and Magog, the devastating “end of times” war as prophesied in Ezekiel (38-39) before the coming of the Messiah and the Third Temple. Indeed, the term “Rosh” as in Gog’s Chief Prince has been compared to “Rus” for Russia or I would say to “Rasha” (wicked, evil one). Further, Russia is coming directly from “the far north” of Israel, and Iran is compared to “Persia” in the war of Gog and Magog. Strangely enough, the timing is coming now, the week of Purim, with the U.S. desiring to finalize the end of sanctions on Iran and rejoin the grossly ineffective Joint Comprehensive Plan of Action (JCPOA) paving the way for Iran and their radical mullahs to go nuclear in the future.

While everyone thought the Cold War ended for good with the dissolution of the Soviet Union in 1991, clearly, they were wrong, and now we are at best in a Second Cold War, which if we are not careful, could quickly become a burning hot conflagration. In the middle of all this potential doomsday is the little, but mighty country of Israel, sandwiched geographically between east and west. On one flank, the U.S. with NATO. On the other flank, Russia, China, Iran, and North Korea. Between them are tens of thousands of nuclear weapons and missiles ready to take aim and fire. Of course, the wicked Russian President Putin comes on the heels of other Soviet leaders like Stalin, in a whole other league of evil, who killed upwards of 20 million people, including 3.9 million in Ukraine back in the 1930s. The question for us now is not only how many unfortunately will again perish in Ukraine in 2022, but whether this is just the beginning of a much larger and more devastating global conflict between tyranny and freedom, and is Putin just gearing up to fulfill his wider ambitions for Soviet geopolitical dominance, and the unleashing of a devastating global war of Gog and Magog? Then again, if any place on earth can bring peace between Putin and Zelensky that would be in holy Jerusalem!