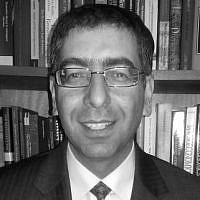 The Blogs
Daniel Schiffman
Apply for a Blog
Please note that the posts on The Blogs are contributed by third parties. The opinions, facts and any media content in them are presented solely by the authors, and neither The Times of Israel nor its partners assume any responsibility for them. Please contact us in case of abuse. In case of abuse,
Report this post.

With the Trump presidency in a state of perpetual crisis, financial markets have lost confidence in Trump’s ability to pass his economic programs. This loss of confidence is reflected in the declining value of the dollar: The Thomson-Reuters dollar index, which measures the dollar’s value against a basket of currencies, is close to a six month low. The dollar has also weakened against the shekel, to 3.59 NIS/$, down from 3.85 NIS/$ at the end of 2016.  According to the latest available figures (ending April 30), the Bank of Israel (BOI) has purchased $6.7 billion so far this year in an unsuccessful attempt to prop up the dollar.

To understand this controversy, let us begin with the undisputed facts.

Approximately 32% of Israeli exports are denominated in US dollars. When the shekel strengthens against the dollar, Israeli exporters to the US (or to other countries that import in dollars) must choose between two unpalatable alternatives: Raise dollar prices and lose market share, or keep dollar prices constant at the cost of lower profit margins in shekels. Either way, a stronger shekel harms Israeli exporters.

To sum up, when the dollar weakens against the shekel, exports decline, imports increase, and the trade balance (which equals exports minus imports) declines.

Now for the controversy. According to the conventional wisdom, Israel must maintain its $7.1 billion trade surplus (2016), and if possible, increase it.  Export growth is the main driver of GDP growth; imports, on the other hand, are a drag on GDP growth. Thus, the strong shekel reduces GDP growth and increases unemployment. The BOI must to do whatever it can to stop the appreciation of the shekel against the dollar, and if possible, to reverse it.  The BOI’s dollar purchases are effective and should be continued; although the BOI has failed to halt the dollar’s slide, the dollar would be much weaker today if not for the BOI’s interventions.

In Prof. Moav’s view, nothing could be further from the truth. In reality, the BOI’s dollar purchases are an unjustified subsidy to special interests, at the expense of workers and overall GDP growth. Why? The trade surplus creates an excess supply of dollars on the foreign currency market, which generates pressure on the dollar to weaken against the shekel. When the BOI intervenes to prop up the dollar, it artificially keeps the dollar price of exports low and the shekel price of imports high, and in turn, promotes exports and represses imports. That is, the BOI keeps the trade balance artificially high. This policy exacerbates Israel’s most acute structural problems:

To answer our original question: If the conventional wisdom is correct, Trump’s weakness harms Israel’s international trade and prospects for growth. The BOI is doing its best to counteract this negative effect, but there is only so much that it can do. But if Prof. Moav is correct, Trump’s weakness can only help Israel’s international trade and prospects for growth, by undermining the BOI’s misguided policy–a policy that only exacerbates Israel’s structural problems.

About the Author
Dr. Daniel Schiffman is a Senior Lecturer in the Department of Economics and Business Administration at Ariel University. He specializes in economic history and the history of economic thought.
Related Topics
Related Posts
Comments