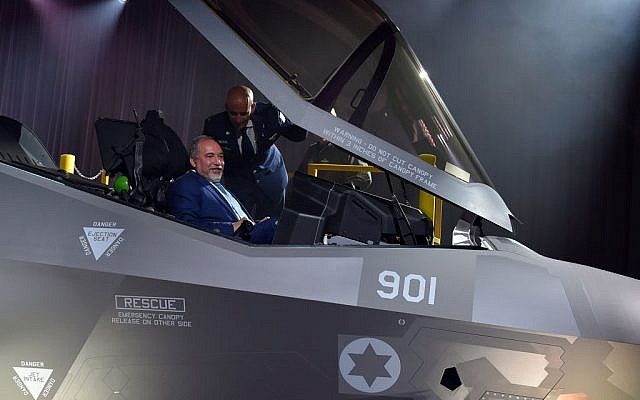 Defense Minister Avigdor Liberman sits in the cockpit of the F-35 stealth fighter jet, as IAF Chief of Staff Brig. Gen. Tal Kelman stands over him, during an unveiling ceremony in Fort Worth, Texas, on June 22, 2016. (Ariel Hermoni/Defense Ministry)

Isaiah the prophet envisioned a future in which Israel will be a place that “the nations will stream to,” as they seek to learn from our wisdom. That vision becomes a reality this week, as 15,000 people will gather from 90 nations of the world to learn Jewish wisdom.

But in a grotesque and horrifying caricature of Isaiah’s vision, these nations are not coming in order to “beat their swords into plowshares.” Quite the opposite. At the ISDEF expo, which proudly proclaims that it will be “the largest defense and security exhibition ever held in Israel,” companies will be given the opportunity to turn their swords into capital and their spears to wealth, so that one nation might continue to raise its sword against other nations, and so that they might continue to learn war, more and more.

But what’s wrong with that? After all, don’t many countries face the threat of insurgencies and terrorism? Couldn’t they benefit from Israeli knowledge and experience in order to protect their citizens?

Absolutely. When you’re talking about clients like the United States, or the UK, France or Germany, or the Netherlands, democratic countries with freedom of speech, checks and balances, and transparency.

Other honored guests, however, are less savory. Take, for example, Myanmar (Burma), to whom both the US and the EU refuse to sell arms, because of the grave human rights violations documented there by government forces, including murder, torture and rape of women and children in order to “cleanse” areas of ethnic minorities. Israel has warm relations with the Burmese government, providing not only weapons which come forth from Zion, but also military training from Jerusalem.

And what of the Central African Republic, against whom there is currently a UN arms embargo because of the deep unrest and instability in the country? The prospect that their weapons may be used to commit atrocities by both sides in the conflict apparently bothers the vendors at the ISDEF expo less. The government of Israel, which oversees and provides licenses for those weapons sales, seems to agree. The history of Israeli arms which played a role in the genocide in Rwanda, in the horrors committed by the military Junta in Argentina, and in mass murders in South Sudan has not been enough to convince nearly anyone, either in the Israeli government, or the Israeli public, that it’s important to change our policies regarding weapons sales so that they are more in line with the US and the EU. Instead, our policies stand proudly with our comrades-in-arms-sales, Russia and China.

Are these issues of concern only for “leftists”? If so, then call me a leftist. And while you’re at it, call Isaiah one, too.

The author is an educator in Jerusalem, and active on the topic of Israeli weapons sales.

Demonstrations against the weapons expo can be found here.