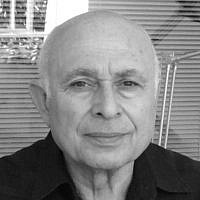 The Blogs
Rouben Galichian
Apply for a Blog
Advertisement
Please note that the posts on The Blogs are contributed by third parties. The opinions, facts and any media content in them are presented solely by the authors, and neither The Times of Israel nor its partners assume any responsibility for them. Please contact us in case of abuse. In case of abuse,
Report this post.

There is a famous quote saying “gold shines everywhere.” However, its shine can never “blind” the international community. Azerbaijan has developed an illusion that through lavishing millions of dollars of “gold” it can build up a positive, democratic and tolerant image of Azerbaijan, thus eliminating the intensifying international criticism on the deterioration of country’s democratic governance and human rights records. The fact that increase of international criticism, as well as steps of the leadership of Azerbaijan aimed at undermining regional stability and security are followed by the intensification of pro-Azeri journalists’ and experts’ efforts to present the image of Azerbaijan as a “country of tolerance” and “eternal victim of aggression”.

While reading Israel Barouk’s article “In Cultural Cleansing ISIS is not Alone,” (The Times of Israel, 29 September, 2015) I automatically remembered the incentive and the raison d’être of this propagandistic article, (the same author in the past has also published articles the sole aim of which was the tarnishing of Armenia while praising Azerbaijan).

On September 10, the European Parliament adopted a resolution on Azerbaijan, which outlines that “overall human rights situation in Azerbaijan has deteriorated continuously over the last few years, with growing intimidation and repression and intensification of the practice of criminal prosecution of NGO leaders, human rights defenders, journalists and other civil society representatives”. And the image of the “most multicultural country”, as presented by the propaganda machine of the official Baku, is completed by the very fact that civil society activists who promote dialogue between Armenian and Azerbaijani civil societies are persecuted as traitors and spies, and are imprisoned for several years.

In the article, the author misrepresents the approach of Armenia and Nagorno Karabakh (Artsakh) towards the Azerbaijani cultural monuments in their territories, and he does not bother to mention that since 2008 the government of Nagorno-Karabakh directed special funds for restoration and conservation of Upper and Lower Mosques of Shushi, the Mosque in Aghdam, as well as initiated studies of Muslim culture and its documentation. Maybe the sponsors of the article just did not inform the author about this “small” detail, or maybe the author just did not wish to present this fact in order not to “humanize” the image of the presented “Armenian monster”. I would like also to mention that since the first day of the war unleashed by Azerbaijan, both Armenia and Nagorno-Karabakh, unlike their neighbour, have taken all Muslim monuments within their territory, including the Azerbaijani cemeteries under their protection. International, as well as Azerbaijani delegations during their visits to Nagorno-Karabakh have had a chance to witness the proof of the above.

With this article Barouk is trying to hide what already has been exposed to the international community. It is well known which party of the Nagorno-Karabakh conflict is destroying the cultural heritage in the “best traditions” of the Islamic State. The examples of such vandalism are numerous.

The author is right: the consequences of the ISIS barbarism towards ancient cultural heritage in the Middle East are immense and irreversible. Those actions were described by UNESCO as a war crime, which urged to “respond to this criminal chaos that destroys culture” and “to put an end to this catastrophe.” Indeed, next generations will never see the ancient cultural heritage of the Middle East, including Assyrian ancient monuments in the Northern Iraq and the Palmyra city. However, the next generations will never be able also to enjoy the ancient Armenian cultural heritage either, which have been brutally destroyed by the order of the Azerbaijani leadership.

In particular, from 1998 to 2005 over 5,000 ancient Armenian cross-stones in the city of Julfa (or Jugha) of Nakhijevan (the Armenian region in Azerbaijan) have been destroyed by the Azerbaijani military. A relevant condemnatory resolution was issued by the 16th International Council on Monuments and Sites (ICOMOS) stating that: “this heritage that once enjoyed its worthy place among the treasures of the world’s heritage can no longer be transmitted today to future generations”. In the same Nakhijevan region all Armenian churches and monuments, numbering over one hundred, were completely destroyed and eradicated, the undeniable proof of which have been presented by the Scottish architect/photographer Stephen Sim. All the above mentioned facts have been documented and published in my books “The Invention of History”, 2009/2010 and “Clash of Histories in the South Caucasus”, 2012.

In general, the history of connections between Azerbaijan and the terrorist networks is a long one. During the Karabakh war, Azerbaijan was widely using the services of Chechen and Afghan mercenaries. The territory of that country had become a real hub for Islamic Jihad, Taliban, and other notorious organizations. Later on, these terrorists who gained a huge experience in Azerbaijan, lent their services to the enemies of civilizations in different parts of the world. It is not a coincidence that, according to numerous reports, today a few hundred Azerbaijanis are involved in the armed clashes in Syria. For example, the famous terrorist Khaled Azeri, who was one of the leaders of Azerbaijani groups within the Islamic State, killed during the international coalition strikes in Kobani, previously was the founder of “Karabakh guerillas” group.

These facts have been overlooked by Israel Barouk, who has already lavished numerous dithyrambic articles on Azerbaijan in his blog at Times of Israel. Barouk and other ‘analysts’ like him are trying to achieve almost the impossible goal of salvaging Azerbaijan’s international image, which is in a free fall. They try to counter the rapidly growing criticism in international media, which presents the inconsolable situation of human rights present in Azerbaijan, repressions toward political and civil freedoms, as well as Azerbaijan’s aggressive actions against Armenia and Nagorno-Karabakh.

Furthermore, the fact is that Israel Barouk presents himself as a Rabbi, while repeating Azerbaijani falsifications and covering their tracks. Here we are facing a double sacrilege. On the one hand, the publishing of an article based on obvious fabrications and falsifications by an analyst declaring himself a Rabbi, and on the other hand, obliviousness of Azerbaijan regarding cultural and human values in order to promote its propagandistic interests. In this way, Azerbaijan, in fact, dishonours Israel and the whole of Jewry.

About the Author
Rouben Galichian was born in the Iranian province of Azerbaijan. He studied engineering in the UK and has worked in many countries as a project manager in oil, gas and petrochemical plants. He is the author of numerous books and articles on the historic maps and culture of the region south of the Caucasus.
Related Topics
Related Posts
Rouben Galichian
Comments