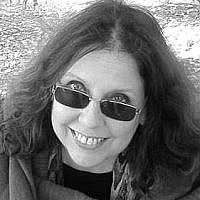 Hello, World! Meet ISIS (The Islamic State of Iraq and Syria), a.k.a. ISIL (Islamic State of Iraq and the Levant). She’s the new gal in town, taking the Middle East by storm, a bitch on wheels with a burgeoning entourage of untold thousands, multiplying daily like a Jihadist supervirus mutated from the cells of Al-Qaeda, but with a evolutionary difference.

ISIS/ISIL is clearly on a whirlwind Jihadist rampage across the Middle East. Not just another terrorist group, not merely another sub-division of Al-Qaeda, ISIS/ISIL’s differences are striking enough to force the question:

Here are the Top 10 Reasons ISIS/ISIL are different from all other terrorist groups we’ve seen so far:

1) ISIS/ISIL is Borderless – As it sweeps through Iraq and Syria, it’s clear that the vision of this group is for a pan-Islamic Caliphate that re-draws the map of the Middle East. They’re not invested in the borders of countries that were drawn up colonial powers after the World Wars.

2) ISIS/ISIL owes nothing to anyone – They’re not beholden to any political system, country or group. No leverage available to the West – they don’t care about boycotts or sanctions. Conventional means of censure won’t work with them.

4) ISIS/ISIL is ruthless – Public opinion and the good will of nations means nothing to them. They’re not courting best friends in other Arab countries or anywhere else. With no one to please or placate, they can do whatever they want.

5) ISIS/ISIL is self-sufficient – They’re not asking anyone for a handout or for International aid. They don’t need anything the West is in a position to withhold.

6) ISIS/ISIL is ideologically, not politically driven – Their goal of dominating the Levant and after that, the entire pan-Islamic world and beyond is fueled by a fresh ideology that acknowledges the failure of every current government system in place in all the Arab countries – failures which the people of those countries all too readily agree with, and promises to succeed where the colonial puppet governments of those other countries have failed.

7) ISIS/ISIL is attractive – Combatants by the thousands have laid their weapons down at the feet of ISIS/ISIL and either fled at their advance or more often, joined them. Their style is SEXIER to the average jihadist than the other military or para-military groups. A lot more opportunity for individual fighters to rise in the ranks and achieve “glory” than in other groups.

8) ISIS/ISIL has an actual PLAN. They clearly communicate their vision to their followers and are able to promise a Sunni-dominated future undisturbed by conventional treaties, trade deals and other social niceties so treasured by other Arab countries.

9) ISIS/ISIL isn’t Co-Dependent – They’re not courting the approval of anyone. They don’t care if you “like” them on Facebook or follow them on Twitter. The battle they’re waging includes the social media front but they’re not using it to gain approval, they’re using it to gain recruits – and it’s working.

10) ISIS/ISIL is gleefully apocalyptic – Should G*d forbid the chemical weapons or nuclear weapons of Iraq and Syria fall into their hands they, unlike other Arab countries, will not hesitate to use them if they feel they’re useful. Censure, threats, UN inspectors, international treaties, etc. mean less than nothing to them.

Is there anything the Western World can do to stop them? There’s nothing they want from “us” and they have every advantage. They’re quick-moving while we are slow and cumbersome. They can make lightening-fast decisions while we have to run each move up and down the chain of command. They aren’t burdened by relationships with other countries, NGO’s or international entities and we are. They laugh at the UN (and I agree with them, the UN is something to laugh at) and international censure will mean less than nothing to them.

Think of ISIS/ISIL like cancer – a mutation of previously “healthy” cells which has suddenly spread and become systemic, popping up all over the “patient” (the Middle East) in recent weeks so quickly it’s now TOO LATE TO OPERATE. Too late for chemo, too late for radiation, too late for surgery.

The first-ever pan-regional Jihadist State is coming to pass quicker than the news cycle can keep up with it.

What can stop the onslaught of something this BIG and this INDIFFERENT to the “normal” incentives that motivate countries to halt aggression? Like a cancer that has spread from one site to many organs within a body, the only way to stop it is to either cut off the supply of what fuels its growth, or to kill the patient.

What IS fueling the growth of ISIS/ISIL?

This super-mutation of a terrorist group is empowered by the collective ignorance and arrogance of the dominant Western culture. We have no idea what drives them, we imbue them with our own values while not bothering to learn or understand what their values are. To understand a phenomenon like ISIS/ISIL we have to, in the words of my Native American Activist friend Michael Paul Hill, “Decolonize our minds”. We’re only seeing them through our lens, and we’re missing the point – and the opportunity.

Yes, the opportunity. Because the flip side of what fuels the growth of this Islamic Fundamentalist Juggernaut is their own single-minded ideological clarity, undiluted by the constraints of intellect, freedom, liberty, rationality, and the rule of law.

ISIS/ISIL isn’t conflicted, she isn’t neurotic. She knows who she is and what she wants.Contrast that with us – we’re conflicted, we can’t decide to be mean or nice, we waffle between political expediencies and wait for someone else to take action or to take the blame.

Sneering contemptuously at the moral bankruptcy of the Western value system, the empty promises of  materialism and consumerism exported under the guise of “democracy” and “capitalism” elicit nothing but disgust from young Jihadists, who see no future for themselves, their families or their communities in the false advertising and empty cultural calories the West is selling. They’ve turned to extreme religious Fundamentalism as the antidote to the moral void and endless cycle of mindless consumerism. 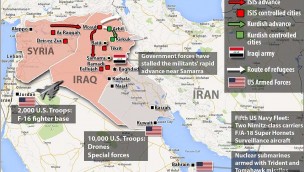 Until the post-modern “civilized” world can offer them something more substantive than the Kardashians, Jihadists will continue to cut a swath of destruction and dominance from the Euphrates to the Great Sea, destroying “Western” institutions and infrastructures along the way, and subjugating their conquests under the shadow of their own brutal interpretation of Sharia law, a world where music is forbidden, schools are sex-segregated at best and girls left uneducated at worst, suspected homosexuals are hung or beheaded, women are forced to cover their faces in public and rule-breakers can look forward to execution or a lifetime in the dungeons of ISIS/ISIL prisons.

Since the apex of Western culture has precious little to offer aside from trinkets, baubles and bullshit, unless we come up with something of idealistic value that resonates with the single-minded focus of Islamic Fundamentalism’s severe world view, it well may be that cutting off the “fuel supply” is too little, too late.

The patient may have to die to kill the cancer. Borders may indeed be erased, regimes indeed may fall. The map of the Middle East as we know it (a modern contrivance only since the late 1940’s) may well be drawn and re-drawn again within our collective lifetimes.

An ironic side-effect of this development may be the possibility of a longshot win for Israel: an opportunity to re-draw the map of the Middle East during the reshuffling of borders, and put “Palestine” where it was supposed to be all along: Jordan. But since ISIS/ISIL has already declared its intention to “Liberate Palestine” in its sweep though the Levant, it’s going to be difficult being politically opportunistic when G*d forbid the marauding hordes are at the proverbial gate.

ISIS/ISIL may be different from all other terrorist groups, but in Israel we’re the same as we’ve always been – completely and utterly dependent on the mercy of our G*d and His promises. Oh yeah, and we’ve also got weapons, and armies, and all that stuff. In a war of ideologies and competing world-views, it’s our ideas and ideals, and whether or not we can successfully model them in real life and communicate them to those who only see our shadow side, which will determine whether or not our trigger finger is firm and our aim is true. 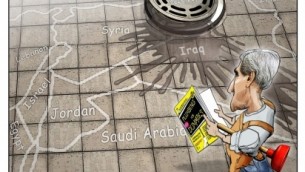 Photo Credit Israel HaYom, and thanks Dave Bender for the suggestion.
About the Author
Lorelai Kude is an award-winning multi-media content creation and communications professional, and the co-founder and Programming Director of Radio Free Nachlaot, an Internet radio station broadcasting "the best music, talk & Torah 24/6" from Jerusalem (and most recently, Berkeley, California). Lorelai writes social, political and cultural commentary on Facebook and her various blogs as well as producing and hosting radio interview shows.
Related Topics
Related Posts
Comments