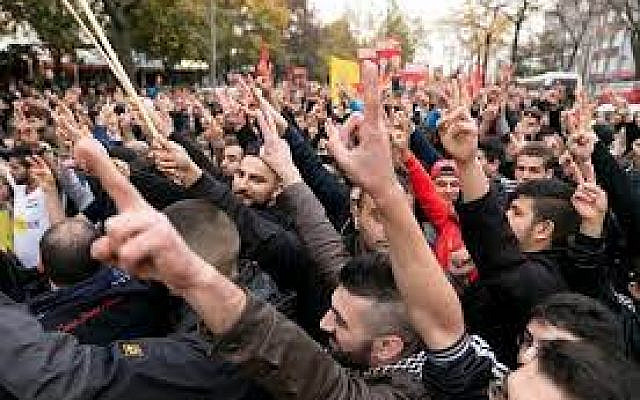 Earlier this week I wrote an entry for the Henry Jackson Society’s blog in which I exposed the danger of Sunni radicalism, its various iterations, and the umbrella organization that remains its most fervent vehicle and instrument – the Muslim Brotherhood.

Indeed, the group, whose ideology stands antithetical to our values, traditions and aspirations – mainly that individuals have an inherent right to choose the manner in which they live their lives, free of stigma and discrimination, has tirelessly worked to pervert and derail our secular democracies, arguing matters of faith to inflame tensions.

While religious communities ought to remain free to practice their beliefs, within the boundaries of the law, it must be said that any and all expression of radicalism, especially when it endangers the safety of others must be expunged, and its ideologies exposed. I would personally argue that extremism, in all its forms, is not only dangerous but more often than not only serves to empower an elite whose ambitions are not to enlighten the masses but to subdue people to their views.

As it were Islamic radicalism has many appointed enemies, our Western capitals being but one … indeed Muslims more than most have suffered the brunt of fundamentalists’ wrath, and so again, in the spirit of multi-culturalism and freedom of religion it stands to reason that we would work to protect them from their reach.

It appears we have dramatically failed. So much so in fact that we have been lured into believing that any and all criticism of Islamic radicalism infers Islamophobia. And yes as I previously commented: “the institutional complex structure of the Muslim Brotherhood makes it particularly difficult for government to legislate over, nevermind counteract at a grassroot level, especially since it acts as an umbrella for various iterations of the radical Islamic thought,” but it doesn’t mean we must simply concede by admitting defeat.

Our inability to address Islamic radicalism has empowered countless ideologues, from various schools of thoughts, whether Sunni or Shia, thus putting our own religious communities, in all their diversity, at risk – but of course not only.

What we have missed is that extremists, if they differ in the iteration of their thoughts, largely agree on how to go about infiltrating our capitals, what levers to use to paralyze us, and most importantly what guilt to exploit to render our officials mute.

But here is where the buck must stop. For decades now radicals have built hubs within our nations, setting up charities and NGOs to not only exert influence away from scrutiny but to exploit our institutions’ generosity to reroute resources and feed agendas contrary to public welfare.

Terror’s network has many arms indeed – a tentacular enterprise that reaches to the heart of academia, media, social media, politics and even the financial sector.

A report in the National revealed in August that “Muslim Brotherhood-linked groups have received almost €80 million in funding from European governments over the past decade.”

MEP Tomas Zdechovsky noted at the time that “Providing financial support and facilitating the public exposure at the EU and all lower levels of governance to organizations influenced by the Muslim Brotherhood is an absurd but sure quest of Europe to self-destruction.”

There is an aspect to this war of ideology we have yet to come to terms with, and that is that Terror’s preachers are competing for control, leaving us to play ‘piggy in the middle’; the main contenders being of course the Muslim Brotherhood and the Islamic Republic of Iran.

A persistent problem remains, and that is identifying Terror’s networks as their very structure has been designed to disguise their existence, making it very difficult from a legal and security standpoint to crackdown on. How does one map out what one cannot see?

But there’s more … this issue was actually recently highlighted by the EU Parliament over a debate on foreign funding and its results: the capture of our institutions, mainly media and academia.

Germany has been leading in its efforts to combat extremism in the wake of the Muslim Brotherhood’s attempts to consolidate its positions there following Arab capitals’ shunning of its members and influence. As European Eyes on Radicalization wrote in September, “Signs of this change came earlier this year, when German intelligence highlighted in public its concerns about the Brotherhood.”

And, “Likewise, the recent decision of the Central Council of Muslims in Germany (Zentralrat der Muslime in Deutschland or ZMD) to expel the “German Muslim Community” (DMG), one of Brotherhood façades reflects the changed mood in Germany.”

The UK faces a more immediate problem. Because radicals on opposite sides of the spectrum are vying for control, danger has never been higher. Last weekend, Ali Khamenei, the Supreme Leader of the Islamic Republic, lauded the Basij forces – a voluntary militia group, whose main duty is to defend and protect the regime, calling on its troops to double down on their efforts to silence the Opposition. If we consider that Basij has men posted across the regime’s outposts, including the West, it puts our communities at risk of reprisals.

Countless dual nationals risk their lives without any guarantee our security apparatus will be able to counter Iran’s regime’s deadly influence.