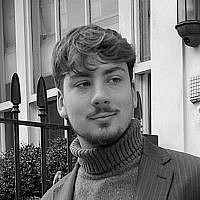 The Blogs
Raphael Lachter
Apply for a Blog
Advertisement
Please note that the posts on The Blogs are contributed by third parties. The opinions, facts and any media content in them are presented solely by the authors, and neither The Times of Israel nor its partners assume any responsibility for them. Please contact us in case of abuse. In case of abuse,
Report this post. 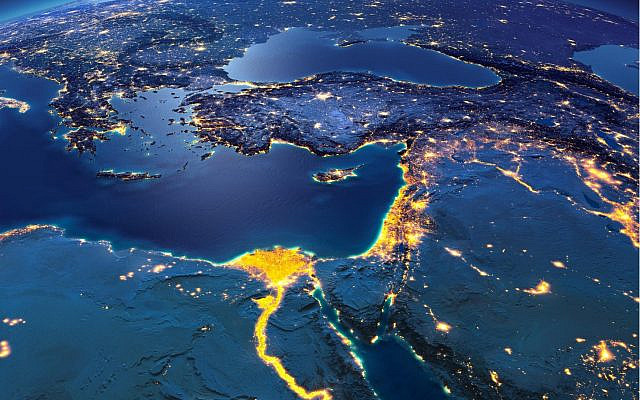 The Kremlin’s invasion of Ukraine has spelt disaster for the post-Cold War European energy system. As a result, Europe’s historic energy relations with the Middle East have re-emerged. Well-established, resource-based economies in the region are primed to renew their relationships with their Western allies through strategic infrastructure projects and green initiatives. Today, however, the likes of Saudi Arabia, the UAE and Bahrain have been joined by Israel – which provides a unique ability to bridge the two energy spheres.

Since the late 1980s, Moscow has proved a reliable enabler of Europe’s enormous consumption of gas and oil. Prior to the modern era, European powers had leant on their colonial holdings in the Middle East and North Africa to supply their energy needs, but decolonisation and its consequences – namely the denomination of oil into local currencies and the protectionism of nationalist regimes – had forced the leaders of the Continent to look elsewhere. By the late 1950s, giant corporations like Eni SpA were joined by European national governments in requesting that the USSR make up for the energy shortfall. Between 1988 and 2011; the Ukrainian Transit System, Yamal-Europe Pipeline, Blue Stream Pipeline and Nord Stream 1 had successfully drawn together Russian and European energy infrastructure. Interdependence has acted as a counterweight to political tension – until a belligerent Moscow shattered peace in Europe last February. By threatening to cut the gas, Russia has demonstrated its ability to weaponize the vast energy resources that had linked it with the European economy for so long, leaving Brussels desperately searching for an alternative partner. 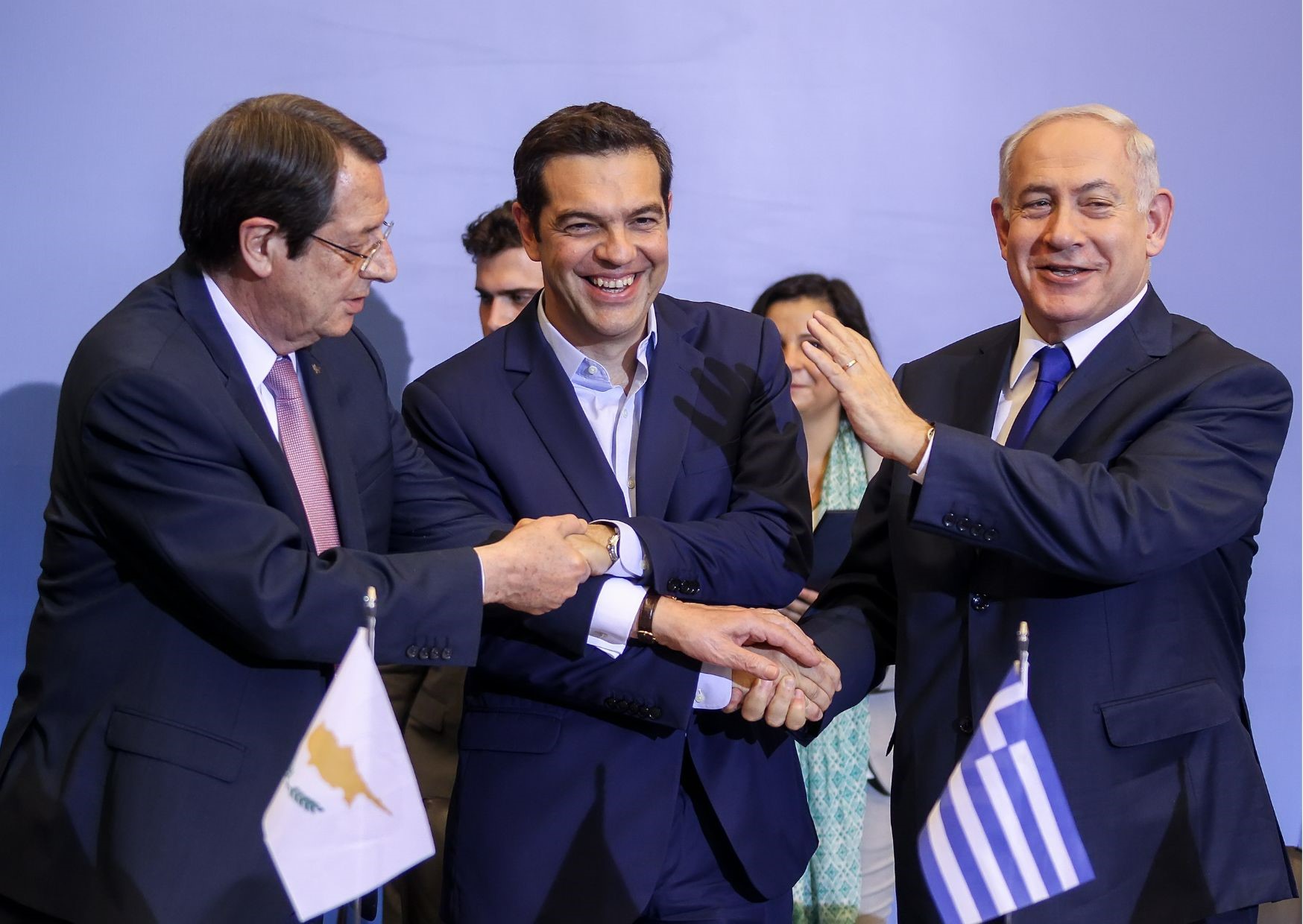 Cypriot, Greek and Israeli leaders hold hands prior to a summit on offshore oil and gas in 2017. (Ververidis Vasilis/Shutterstock.com)

As Europe shifts focus from East to South, Israel is poised to make the most of new and vital energy opportunities. Most significantly, Israel has successfully tapped into a series of gas and oil fields off its Mediterranean coast. The Jewish state has agreed, together with Cyprus and Greece, to begin construction of a new Eastern Mediterranean (EastMed) gas pipeline, enabling the three states to vastly alter the security and energy framework of southern Europe. The pipeline would connect two major gas fields in Israel and Cyprus to Greece and Italy, with a capacity of 12 billion cubic metres per year (4% of the total EU import of gas). The infrastructure would reduce Europe’s reliance on Turkey, where the government under President Erdogan has enflamed an already unstable economic climate in recent years. Of the eight Israeli natural gas fields discovered since 1999, half are already in production and the Leviathan Field has been generating gas commercially since 2019.

The potential brought by the EastMed Gas Pipeline is not without its challenges. Cyprus, a key player in the prospective project, is yet to progress on the Aphrodite Field, which at present cannot viably produce gas for commercial consumption. Frustrated by both Turkish and Israeli territorial disputes over the extent of the Cypriot exclusive economic zone, construction has been obstructed. Environmental factors and the marginalisation of Turkish supply lines have dissuaded the USA, which is carefully navigating an increasingly unpredictable Erdogan. Instead, America has reinforced its support for the EuroAsia Interconnector, transmitting electricity rather than gas from Israel to Cyprus and Greece. The 2,000-megawatt proposal is a major Project of Common Interest for the EU with completion forecasted for 2025. Following more than a decade of discord, Ankara has recently restored full diplomatic relations with Israel, incentivised by prospects of energy collaboration such as the 2016 proposal to deliver Israeli gas to Turkey and then to Europe. Israel also requires security guarantees such as a contractual agreement confirming European willingness to purchase long-term gas supplies from sources other than their current supplier. Firstly, however, the EU must perform feasibility studies and establish regulatory procedures that are yet to be completed. Official obligations and alternate proposals have made the EastMed project one of several significant energy opportunities opening to Israel and southern Europe. 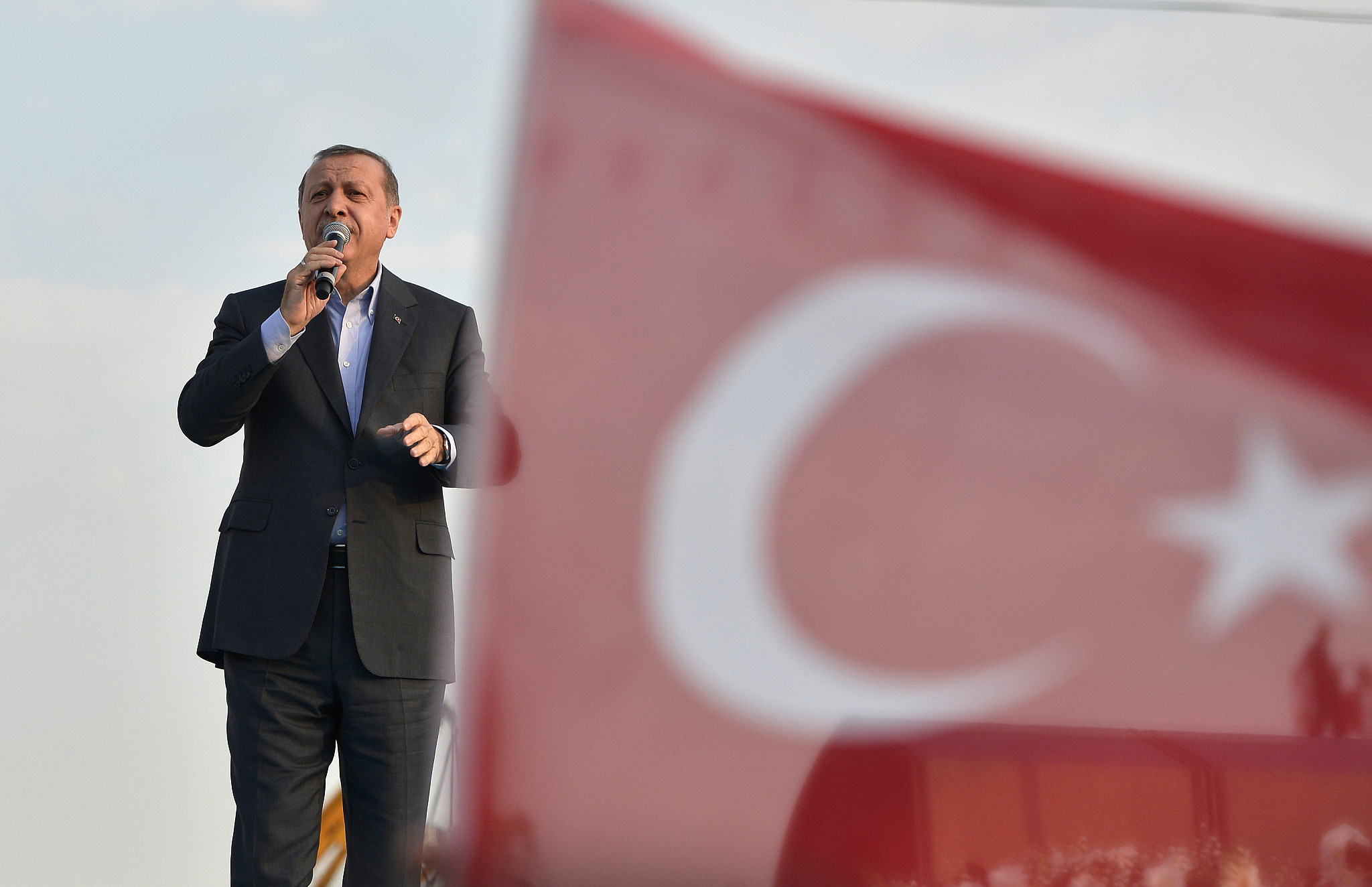 For decades, Arab states in the Middle East have worked together to restrict trade to Europe through anti-colonial and protectionist pan-Arab policies. However, inter-Arab competition, Israel’s military victories and the dual threats of Islamist extremism and Iran’s regime precipitated the downfall of this approach – presenting the EU with an opportunity for commerce with some of its most lucrative neighbours. Today, states like the UAE and Bahrain are leading what scholars Hussein Abu Bakr and Nir Tuvia Boms call an ‘Axis of Renaissance,’ embracing global cooperation with diverse nations. As a result, many Arab states have joined with Israel in establishing formal relations via the 2020 Abraham Accords. Morocco, the UAE, Bahrain and even Saudi Arabia have nurtured ties with the Jewish State, culminating in a plethora of joint declarations and deals. These states have developed their own green-energy aspirations, which could provide Europe with cleaner, safer energy in the face of gas shortages. With mutual climate challenges to confront, the UAE and Israel have driven the new, Middle Eastern green agenda. The Gulf-Israel Green Ventures project aims to bring Israeli green technology to the Gulf region by providing a forum for respected businesses to enter cross-border collaboration, developing green hydrogen with the goal of producing more clean energy. Anticipating enhanced bilateral ties, the two have signed comprehensive economic partnership agreements in May 2022 which support financial, distribution and construction services. The agreement envisions that bilateral trade may increase to more than $10 billion over the next five years and is one of more than 60 memorandums of understanding signed between the states. The engine of green power emerging in the East Mediterranean might provide a crucial opportunity for Europe to diversify its energy resources.

Historically, sea-faring trade has defined the economy of southern Europe. From the Greek empire’s incursions into the levant to Roman domination of the Mediterranean Basin and the medieval expeditions of Venice and Aragon, Southern Europe has always relied on shorelines for enterprise and industry – which perhaps explains its difficulty integrating into the pan-European economy of the 21st Century. In 2008, Europe’s historic relations with the Middle East manifested diplomatically through the establishment of the Union for the Mediterranean within its general Neighbourhood Policy. Even deeper cooperation could further reduce the economic disparity between Europe’s constituent states. Alternate trade routes to the Straits of Hormuz (Persian Gulf) and Bab al-Mandab (Red Sea), which are hindered by destabilising elements in the form of Iran’s regime and its proxies, can align southern Europe with the EU’s more resilient western and northern members by securing crucial resources.

Throughout history, the Mediterranean Sea has acted as a highway for the diffusion of cultural and commercial influences. (Shutterstock.com)

The Tracks for Regional Peace, Regional Land Bridge and Hub Initiative were officially announced in 2019 by Israel’s Ministry of Foreign Affairs, with the aim to create a trade corridor between the Mediterranean and Gulf regions through a connected series of railways. Israel and Jordan have already committed to a joint industrial zone, with a ‘Jordan Gateway’ streamlining labour flow between the two states. The project would extend from the Israeli harbour city of Haifa to Jordan (potentially through the West Bank), before connecting to the existing SAR North-South Railway in Saudi Arabia. There, trade would be opened to the Indian Ocean and international markets, linking southern Europe to resource-rich economies through Israel. Alongside the first station of a future trans-Arabian railway, Haifa is to house a refinery for oil transported across Israel. The Europe-Asia Pipeline Company (EAPC) has recently reached an agreement with the MED-RED Land Bridge Ltd (MRLB), a joint Emirati and Israeli venture. In this context, the UAE’s Mubadala Petroleum signed a memorandum of understanding to buy 22 percent of Israel’s Tamar oilfield. The MED-RED project aims to store and transfer oil products between the Red and Mediterranean Seas, providing Europe with another potential access point to energy within geographical proximity. Strengthening economic and diplomatic bonds in the Middle East have provided fresh opportunities for the EU, including a wealth of resources should it decide to establish key bilateral trading relations.

The Russian invasion of Ukraine has disrupted the post-Cold War energy system. Instead of relying on Russia, Europe must turn its attention elsewhere. The thriving democracy of Israel, utilising newly warmed relations with its neighbours – can support Europe through such a realignment thanks to a period of innovation that the Israeli economy has never before experienced. Together with Arab states such as the UAE, Bahrain and others, Israel could provide the EU with much-needed relief through new gas infrastructure, innovative green technology and dynamic railroad projects, linking the markets of southern Europe to more stable, prosperous, and resource-rich economies.

About the Author
Raffy is Director of Educational Programming at StandWithUs UK. Raffy has developed and organized a budding Zionist community at a wide range of university campuses, cooperating with NGOs to assure Jewish representation. He has worked with some of the Jewish communities strongest allies and pioneering voices. Raffy is a graduate from Nottingham Trent University, studying Politics and International Relations and is reading toward a post-graduate degree at King's College London.
Related Topics
Related Posts