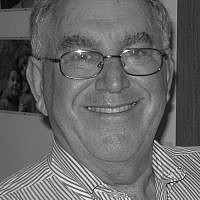 The Blogs
Michael Gordon
Apply for a Blog
Advertisement
Please note that the posts on The Blogs are contributed by third parties. The opinions, facts and any media content in them are presented solely by the authors, and neither The Times of Israel nor its partners assume any responsibility for them. Please contact us in case of abuse. In case of abuse,
Report this post.

Many of us have strong ties to Israel as I do, having lived there for four years, done some of my medical training, and served as a physician in the IAF.  Although I did not come from a Zionist home, I came to Israel while a medical student to work in Rambam Hospital. The epiphany I had when on the beach in Haifa was when I realized that “these are my people.”

My great love for the country leaves me aghast when I hear Jews, primarily now in Canada where I live, claim disaffection with Israel because of “The occupation.”

My first shocking experience with this explanation was from a Canadian professor with whom I was breakfasting in Toronto. I mentioned something about my life in Israel to him and he replied, “I used to support Israel, but stopped because of the occupation.” When I probed and asked him what he meant, he talked about the West Bank and settlements. When I asked why the Palestinians and Arab states were talking about the occupation long before the Six-Day War, he had no answer. Out of respect for him I treaded lightly on the Khartoum declaration which followed the peace offer of Israel after the Six-Day War. To this, he also had no answer and was not aware of its content. Nowadays when conversations like that come up I can find the declaration on my cell phone and show it to them: “No peace with Israel, no negotiations with Israel, no recognition of Israel, and maintenance of the rights of the Palestinian people in their nation.”

The second important encounter occurred as part of my academic medical pursuits. There were a number of anti-Israel articles/opinion pieces in The Lancet, a prestigious British medical journal. I was in communication with one of the senior editors following a letter I wrote. He too lambasted the occupation and the way Gazans were treated (this was prior to Israel’s withdrawal). His conclusion when I pressed him for possible solutions included the view that “Israel should never have been established.”  I countered with the fact that it was the rightful homeland of an ancient and now modern people and had been populated by many Jews long before the establishment of the state; he stuck to his position that the vast majority of its inhabitants occupied the land as refugees and immigrants from Europe and in essence should return whence they came. I dared not ask why his people, whoever they were, displaced the indigenous Celts that inhabited the country previously?

Closer to home, at a recent gathering at my home for Hanukah, one of the guests was a young fellow with a decidedly Hebrew name. I asked him as part of ordinary conversation if he had ever been to Israel, on Birthright or similar program. He countered with, “I will not go to Israel until the occupation ends.” Because he was a guest at my house I did not wish to confront or embarrass him with some historical perspective. He mentioned that he grew up in Toronto but was studying in the United States. Out of curiosity I searched the indigenous roots of the place in which he now lives and studies and of course as with most of North American History, these lands belonged to and were “occupied” by European settlers. Of interest, it has become customary in Canada at any presentation to name and honour the lands on which the event is taking place: referring to the original indigenous occupants. But those citing the original occupants have no plans to return whence their ancestors came.

It is a challenge to change minds and opinions that are formed in an environment of historical vacuum. The media has done a very good job at reporting the short-comings of Israel. The organization Honest Reporting does a commendable job at highlighting and challenging offensive and inaccurate reporting in the world-wide media.

How those of us who are advocates of the country can have a positive impact on those who criticize, not necessarily from malice, but from true ignorance is a challenge. As my late bubby who helped raise me would say as her most damning criticism about a person, Gornisht gevi’sn”(Yiddish for ‘know-nothing”). It is imperative that we use our knowledge and experience and often historical perspective to help reshape the narrative. On a recent group trip that I participated in there were many non-Jews. It was uplifting to hear their response to observations and experiences that were not part of their understanding of the country prior to visiting it. More effort should go into educating and exposing ambivalent Jews, as well as non-Jews, to the reality and beauty and history of Israel.