By Stephen Eric Bronner and Eric Gozlan, Co-Directors of the International Council for Diplomacy and Dialogue.

Qatar has become a key player in the Afghan crisis regarding negotiations between Washington and the Taliban, and for its help in evacuation efforts. However, Qatar plays a complicated game: it welcomes Islamist movements and simultaneously hosts the largest American military base outside the United States.

This has been going on for many years. Sheikh Hamad explained his country’s policy in an interview with the Financial Times on October 24, 2010: “Our policy is to be friends with everyone. We seek peace. This does not mean that if two camps want to fight each other, we have to take sides with one of them, no we like to be in liaison with both parties.

On the occasion of the first anniversary of the Abraham Accords, we at ICDD decided to focus on the relationship between Qatar and Israel; we also believe that Qatar will  soon become party to that agreement. Relations between Qatar and Israel have existed – off and on –for nearly 30 years: What follows is a brief history of those ties.

1993: Meetings between Shimon Peres and the Qatari Ambassador to the United Nations took place while the Oslo agreements were being signed.

1993:  Qatari Foreign Minister Hamad Bin Jasmen (discreetly) worked to better ties between Doha and Israel via the directors of ENRON (an American company close to the pro-Israeli lobby). This company had a project for a pipeline that would link Doha to Haifa where a degasification terminal would be built to export raw materials to Europe. Following the bankruptcy of Enron, the project was terminated.

1996: Israeli Foreign Minister Shimon Peres visited Qatar to inaugurate a new Office of Commerce in Doha. Of interest is that airport protocol was respected: flags of both countries flew and both national anthems were played. The office was opened following  negotiations that were led by diplomats who worked for the Oslo agreements Uri Savir and Sammy Ravel, who directed the Israeli office in Qatar.

1996: With the election of Benyamin Netanyahu, relations between the two countries grew colder.

2000: Second intifada: Relations between Israel and Qatar hardened, but Qatar did not close its embassies as did Morocco, Tunisia and Oman.

2002: Qatar headed the “Arab Peace Initiative” committee. During the Beirut summit, the Arab countries in attendance proposed that Israel withdraw from the occupied territories in exchange for normalization of relations and recognition of the Jewish state.

2006: Opening of the “Doha Stadium,” located in the city of Sakhnin, Galilee (Israel), which was largely built with public funds from Israel and the Qatar National Olympic Committee, and it was named after the Qatari city of Doha. Qatar’s participation was intended to show that relations between the two nations were peaceful and that they have certain shared interests.

April 2008: Foreign Minister Tzipi Livni was invited to the Doha Forum. During her stay, she met the Emir, the Prime Minister and the Minister of Oil and Gas of Qatar. Minister Livni had already met the Qatari Emir during a United Nations conference in New York the same year.

2014: Israeli swimmers participated in the 2014 World Swimming Championships in Doha.

June 2015: The Qatari Government facilitated talks between Israel and Hamas in Doha to discuss a possible five-year ceasefire between the two sides.

February 2020:  Dr. Vered Windman of Israel participated in the ISPAN (International Society for the Prevention of Child Abuse and Neglect) congress in Doha.

September 2020:  In its September 2, 2020 edition, the Times of Israel media  revealed that Qatar and an Israeli gas company would discuss a gas pipeline to Gaza. The article also reported that Qatari envoy Al-Emadi arrived in Israel as tensions between Israel and Hamas were rising, with a mission to mediate between the two sides.

2020: The Israeli press reveales that Mossad chief Yossi Cohen and the senior Israeli army officer in charge of Gaza, Herzi Halevi, went to Qatar to discuss the situation upon order of Prime Minister Benyamin Netanyahu. 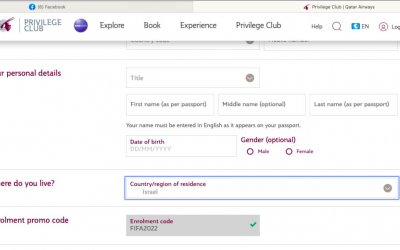 August 20, 2021: Agreement between Qatar and the UN for Qatari funds to enter Gaza. Monthly grants of $100 for 100,000 will be distributed to poor families in Gaza through a UN-backed mechanism. Defense Minister Benny Gantz welcomes the agreement.

August 21, 2121: Israeli Defense Minister Benny Gantz thanks the Qatari authorities in a tweet but deletes it a few hours later. 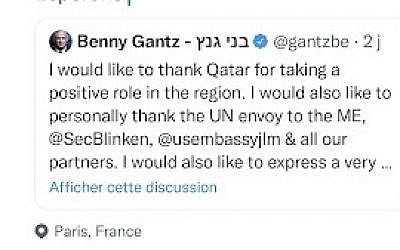 Good relations between Qatar and Israel can prove of major importance for the region. As we have seen, the dialogue between these two states has been ongoing.

As co-directors of the International Council for Diplomacy and Dialogue, we were invited to the 2019 Doha Forum. Many Western personalities were present, and we were both pleasantly surprised when we read in the hotel’s directory book that it was possible to call Israel directly.

There is surely more to come.

About the Author
Eric Gozlan is Government Counselor and co-director of the international Council for diplomacy and dialogue. He works in civic diplomacy in the Middle East and in Africa. He has received numerous awards for peace and gives numerous lectures. He served in the IDF for several years.
Related Topics
Related Posts
Comments