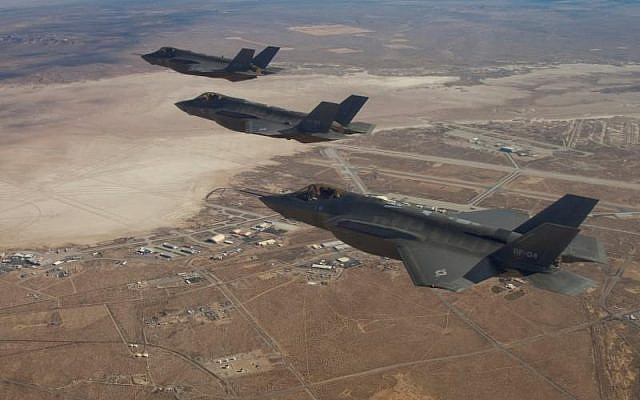 F-35 fighters over Edwards Air Force Base in a file photo. Darin Russell/Courtesy Lockheed Martin/via REUTERS
“I made a g today/ but you made it in a sleazy way”
– Tupac, “Changes”

On Thursday, January 28, 2021, the Biden administration announced that it was re-examining the sale of F-35 fighter jets to the United Arab Emirates – a sale that had formed the lynchpin of the Abraham Accords between the UAE and Israel signed the year before, through President Trump’s mediation.

Indeed, after four years, it is now undeniable that Israel benefited from the Trump administration’s foreign policy priorities. Whether those benefits outweighed the deep damage these priorities caused to Israel’s vital security interests is another matter. But Trump did assist Israel in pushing through peace deals with several MENA nations, deals that Israel had labored a decade and more to secure.
The saying goes that you should never look a gift horse in the mouth, and Israelis were happy to oblige, naming streets and even a planned settlement after Donald Trump. Bibi showered his counterpart in the White House with flatteries and made a public display of barring his political opponents from entering the country.
One must wonder what the residents of Troy, were they with us today, would have to say about this “gift horse” expression?
Yes, we profited off America’s apparent death-spiral and the near-total abandonment of its own national security interests. Our leaders, in their wisdom, wagered that America would not recover and seek to reclaim those interests. It is now apparent that they bet on the wrong horse.
I am a supporter of the deal with the UAE. I have argued before that the proliferation of the latest military gadgetry in the Gulf – an area already engulfed in its own arms race – is a small price to pay for settling a historic regional dispute on peaceful terms. Indeed, it is possible that a better-armed UAE can even contribute to regional stability by raising the stakes for Iran’s habitual acts of aggression against its neighbors. Undeniable, as well, is the snowball-effect this deal had on precipitating other peace agreements between Israel and its neighbors.
It’s a shame, for all these reasons, that we had to arrive at such a settlement like this. In the eyes of the reinvigorated US establishment, any deal signed with Donald Trump at the table is now (very much rightly) subject to suspicion. And, consequently, all of these gains we have made at the expense of our closest of allies are now threatened by virtue of the tainted means of their obtainment.
The US State Department is right to reexamine these deals, to ensure that they were indeed arrived at with the appropriate interests at heart. I hope that they will reach the conclusion that this deal was sufficiently justified by its results. I hope that we won’t see the fruits of all those years of labor come crashing down around us, just because we cheated in the home-stretch.
And I hope that Israelis learn an important lesson for the future about who we accept help from, and at what cost.
About the Author
I was raised in a small Ultra-Orthodox community in Milwaukee, and made Aliya at the age of 18. I volunteered in the IDF and continue to serve in the reserves. Today I work and research in the field of law, while enthusiastically pursuing my hobbies of historical and political research and discourse. I am a husband and father of three.
Related Topics
Related Posts
Comments