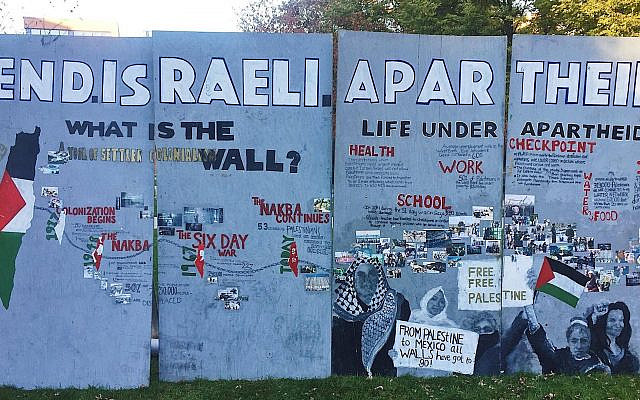 Analogies are standard fare in arguments. When added smartly they can illuminate a confusing situation.

But analogies can also be squeezed into arguments where they just don’t fit.

Avoiding “another Vietnam quagmire” or another “Munich appeasement” are just as likely glib references as they are accurate insights to today’s challenges.

Politicized analogies are especially prone to oversimplifying issues. Often this is by design, to deceptively label victims and villains.

Exploiting analogies is a popular weapon of anti-Israel advocates. Their perverse comparisons include “Zionism is racism,” the IDF is the “S.S.,” Gaza is the “Warsaw Ghetto,” abhorrent settler attacks on Palestinians are “pogroms,” the IDF’s unintentional killing of fewer than 100 Gazan civilians this past May is a “genocide,” and a private real estate dispute between property owners and 13 long term tenants is “ethnic cleansing.”

(Commandeering phrases referencing the worst moments of Jewish history apparently doesn’t count as “cultural appropriation,” even when the term is transformed into a verbal attack on the descendants of the original victims.)

Another ginned-up anti-Israel analogy is that Jews returning to their historical homeland are “colonialists” and “imperialists.” From which and for what homeland country did those making aliyah supposedly do this colonializing and imperializing?  Beyond an uninterrupted 3,000 -year Jewish presence in the Land of Israel, since most Israeli Jews originate from the Middle East itself, the analogy must mean these returning Jews are colonializing and imperializing on behalf of such well-known Zionist home bases as Iraq, Yemen, and Iran.   The very possibilities put the lie to the analogy.

Such weaponized analogies are unserious.

But they are a mere prelude to a new orchestrated campaign to analogize Israel to apartheid-era South Africa.

Few political phrases are as universally reviled as apartheid. Its associations are, appropriately, irredeemably, wholly foul.

That is how it should be. That is what apartheid was. That is why calling Israel “apartheid” is not simply objectively wrong. It purposefully distorts reality, incites emotions (on all sides), and impedes the already Herculean task of peace-making.

Among others in 2021 jumping on the perverse “Israel is apartheid” analogy bandwagon were B’tselem, Human Rights Watch, Congresswoman Alexandria Ocasio-Cortez, and the United Church of Christ. In 2022 several other Mainline Protestant denominations will likely affix the scarlet letter of apartheid onto Israel.

In one unscientific but sample indicator of the trend, half of the critical replies to a late December 2021 Chicago JCRC Tweet saluting anti-BDS legislation used “apartheid.”

The push is so apparent that Foreign Minister Yair Lapid, in his New Year’s briefing with Israeli journalists, warned “there will be [a] debate that is unprecedented in its venom and in its radioactivity around the words ‘Israel as an apartheid state.’”

Co-opting “apartheid” for your side of an argument is a smart but sinister tactic.

Life for Palestinians is not always easy or just.  But not every hardship is genocide, a war crime, or apartheid. Comparing what Palestinians – who elect their own politicians, control their own national institutions, and, in Gaza, arm their own military – endure to what Blacks endured under South African apartheid is inaccurate and (mis)appropriating someone else’s misery to advance your own cause.

Just as every person with a differing opinion isn’t a Nazi or a communist, neither should every controversial situation be made relatable by invoking a hyperbolic historical analogy. Such important, singular issues merit their own narrative, a unique analysis of its own special circumstances, decoupled from someone else’s experience.

Sadly, it seems that with the “Israel is apartheid” lie, like the 30- year lifespan of the U.N.’s “Zionism is racism” lie, anti-Israel forces are investing in demonization, not reconciliation.

It’s like they have learned nothing from history.  It’s analogous to…