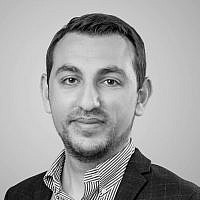 The Blogs
Konstantin Ghazaryan
Apply for a Blog
Advertisement
Please note that the posts on The Blogs are contributed by third parties. The opinions, facts and any media content in them are presented solely by the authors, and neither The Times of Israel nor its partners assume any responsibility for them. Please contact us in case of abuse. In case of abuse,
Report this post.

The comparisons between Armenia and Israel are as old as both civilisations. Since ancient times, two civilisations, which despite their similarities are on different sides in geopolitics, have been compared with each other. Whether the Armenian genocide and the Jewish holocaust, the ancient cultures, the large diasporas or the geographically isolated location of both countries.

In Armenia itself, too, attempts are being made – especially after the last Nagorno-Karabakh war – to draw conclusions from Israeli history. Nevertheless, in many cases these conclusions are one-sidedly limited to Israel’s military factor. Others, on the other hand, consider comparisons to be totally overdrawn on the basis of Israel’s American protective role. It turns out, however, that the wars of 1948, 1956, 1967 and 1973 and even the peace negotiations in 1977 have strong parallels to post-Soviet Armenia.

Despite their inferiority in terms of weaponry, strategic superiority and the knowledge that defeat could lead to an existential crisis played an important role in the wars in both countries.

In other words: In the 1948 War of Independence, Israel was de facto on its own. In the 1967 Six-Day War, too, Israel tried to launch military operations in secrecy from the United States in order to maintain the surprise effect in the pre-emptive strike and to avoid being hindered in other respects by the US.

These situations are quite comparable to the first Nagorno-Karabakh war in 1991. After independence, Armenia found itself in a direct war with its demographically, militarily and financially superior neighbour. The de facto blockade from both sides – from the West as well as from the East – made it much more difficult for the Caucasus state to survive. Similar to the Israeli War of Independence in 1948, primarily paramilitary units were formed in Armenia alongside the remnants of the Soviet army.

Despite their inferiority in terms of weaponry, strategic superiority and the knowledge that defeat could lead to an existential crisis played an important role in the wars in both countries. No less important was the overconfidence of the opponents. Numerical superiority led both the Arabs in the 1948 war and the Azerbaijanis in the 1991 war to wrong evaluations.

In the following years, Israel drew lessons from history and established modern structures, a high degree of organisational capacity within the army and a military doctrine that was oriented towards political realities. Due to the realisation of a permanent existential crisis, Israel managed to do what Armenia failed to do: raise the awareness of the whole society and create a society that is highly capable of organisation. In particular, this concerns areas such as military mobilisation in times of war, proper organisation of individual units. And above all, Israel succeeded in creating an army with professional officers and, above all, young officers. The example of Moshe Dayan, Israel’s former defence minister, illustrates this aspect particularly well. A look at the Armenian example shows that since the end of the war in 1991, but especially from 1998 onwards, Armenia has on the one hand misjudged political reality, overestimated its own military capabilities and prepared itself for a 20th century war in the 21st century. 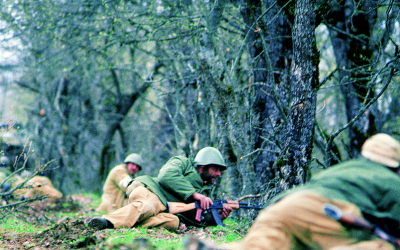 While the Israeli leadership was aware of the demographic and financial superiority of the Arab world in its entirety, the Armenian foreign minister in 2005, for instance, was convinced that “not only Azerbaijan but also Armenia will develop in the same way”. A fatal misjudgement with long-term consequences.

Today, the Armenian leadership is struggling with problems that David Ben-Gurion and Golda Meir tackled in the first years of Israel’s statehood: In addition to a functioning army, having its own military industry, fighting corruption, returning Jews to Israel and building a strong economy. While Israel’s population increased by a factor of 22, from 400,000 in 1948 to about 9,000,000 in 2021, the Armenian population declined sharply. Two societies with similar starting conditions developed in different directions. While the struggle for existence led Israel to become one of the leading countries in the fields of medicine, military and economy, Armenia experienced stagnation.

Peace agreement as a gamechanger in the conflict

While people in the Armenian discourse want to learn from Israel’s military factors, they neglect the peace efforts in the Camp David process. Those peace efforts that made the recognition of Israel in the Arab world merely a matter of time.

After the wars of 1956 and especially the Six-Day War in 1967, Israel was not only able to weaken the Arab world militarily, but also to make large territorial gains, which Israel used as a buffer zone in the following years. These territorial gains were later exchanged for the peace treaties. Despite Israel’s military-strategic superiority after the relatively more challenging Yom Kippur War, one thing was clear: without an effective peace treaty, Israel would find itself in a permanent three-front war and an existential crisis. The peace efforts after the Yom Kippur War were essentially in line with the core of political realism: an evaluation of one’s own military and political power, a cost-benefit trade-off and calculated peace efforts. Israel’s main advantage in the peace effort was that it acted from a position of strength and had the opportunity for concessions. In line with the idea of “land for peace”, the Arab states could be persuaded to make a valuable peace without losing face. By returning the formerly conquered buffer zones, Israel secured a de facto peace – which continues to this day – with both Egypt and Jordan. 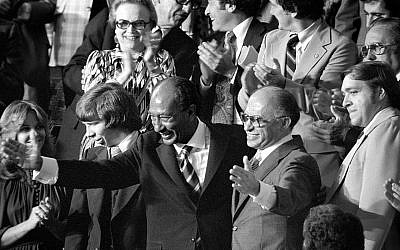 A new pan-Arab war would have no chance of military success without the Egyptian military, one of the strongest in the Arab world. The peace treaty with both states opened the Israeli path to the Arab world, gave Israel a break and established new forms of warfare that we know from the Gaza conflict of the last decades.

A look at Armenia shows that, similar to the Israeli example, the Armenian elite recognised the importance of peace negotiations after the won war in 1991-1994 and, similar to Israel, was prepared to make concessions true to the formula “land for peace”. Nevertheless, by 1998 at the latest, these debates in Armenia led to the fact that realistic peace treaties between Armenia, Nagorno-Karabakh and Azerbaijan were declared “betrayals” on the basis of concessions and were prevented. If ever there was a minimal chance of stability in the region in Armenian history, it was through the 1997/98 treaty. In return for territorial concessions, international peacekeeping forces, the maintenance of a security corridor, the status issue would be put in place. Similar to the Arab-Israeli example, where peace negotiations were ridiculed as unrealistic 50 years ago, stability could have been established in the Caucasus. In 1997, Armenia had the opportunity to win concessions from a position of strength. Azerbaijan, on the other hand, would be able to end the conflict without losing face. This was undermined with the resignation of the Ter-Petrosyan administration in 1998 and the paradigm shift towards “status quo” politics. Today, Armenia negotiates from a position of weakness with no possibilities for concessions.

One of Israel’s greatest strengths and Armenia’s weaknesses was and is the ability of critical self-analysis in the fields of politics, diplomacy and military. While Israel was able to consolidate military successes through concessions in long-term stability, maximalist and illusory solutions prevailed in Armenia. This paradigm shift, which was established in the beginning of 2000s and was developed by the acting government, was the cornerstone of the situation that faced Armenia in 2021.

About the Author
Konstantin Ghazaryan graduated from the University of Salzburg with a degree in International Relations and European Policy (Political Science), focused on security related topics. Professionally he is a member of Austrian People's Party and currently on staff for an Austrian member of the parliament. As an Austrian-Armenian he is also a founding member of the Austrian-Armenian Forum.
Related Topics
Related Posts
Comments