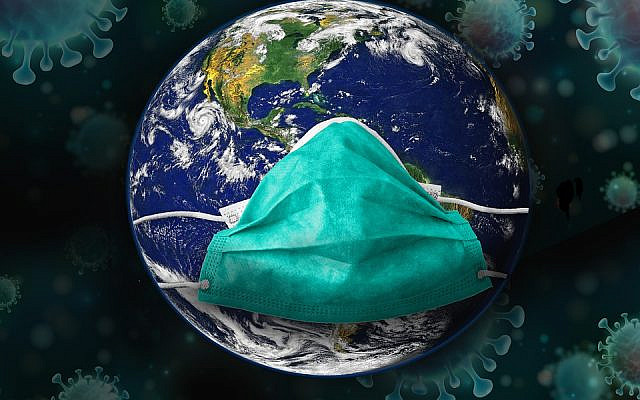 Sorry to be the party pooper. I know it isn’t politically correct to talk about God. But what can I do? I’m a baal tshuva, which in Hebrew means a person who has returned to serving God. To me God is everything and everywhere – just like COVID-19 and the masks He has the whole world wearing. Everything is from God. He is the Creator of the World and the Master of the Universe, and He is the source of Corona, and He wants us to recognize Him as the one and only King. The pandemic may have started in a filthy market in China, but that’s only the way God brought it about. He could have started it in a hundred different ways as well.

A few months ago, I wrote a blog warning people not to throw away their masks when countries started to reopen their economies. Lo and behold – a second wave is upon us. Because the plague will only go away when people realize that God is the One who sent it. He wants mankind to return to Him, all of humanity, not just a few people here and there – everybody.

Ever since Adam and Eve were cast out of the Garden of Eden, God has been patiently guiding world history in a gradual process of Redemption to bring humanity back to the Garden. Corona is the latest stage in the process. It won’t go away until its purpose has been fulfilled. Scientists will eventually discover a vaccine and effective medicine against the deadly virus, but if mankind doesn’t change its godless way, then God will just punch a few keys, alter the genetic coding, and hurl down another wave of an even nastier mutation, call it COVID-20, or COVID 21, if another round is needed. Things have to change. Not just a superficial change, like the fact that everyone on the globe is wearing a mask, as if every day were Purim, but a deep inner transformation. God wants us to abandon our unjust and immoral ways and become good people. He wants nations to put an end to corruption and injustice, and to serve Him by living according to the laws He set down in the Torah. He expects Israel to lead the way, and then all of the other nations to follow, as He proclaimed via the ancient prophets of Israel, promising that a day would come when all of the nations would flock to Jerusalem, and to the rebuilt House of the Lord, the Jerusalem Temple, to learn the ways of Jacob.

Which means that Jacob, the Nation of Israel, must become a baal tshuva nation and return to the Lord, just like it is written in the Torah. Until then, Corona won’t go away, no matter how many vaccines and vaccinations are invented. The end of Corona (or whatever other plague that God decides to send) will only cease when the world returns to God. Right now, people are still sleeping. They don’t understanding what is happening. They don’t understand that God is hiding behind the curtain, pulling the strings. The world is waiting for Israel to tell them. Corona, and rioting, and anti-Semitism will increase with evermore severity until the Jews wake up from their long slumber of two-thousand years and remember their mission of being a light to the nations. Then, with Israel’s spiritual revival, the rest of mankind will understand that only in God lies salvation – not in science and vaccinations; not in Jesus and other false deities who have no substance or power to save. Redemption lies only in following the One-And-Only, true God, the God of Israel. And this great World Return, will take place, first amongst the Children of in the Land of Israel, and then throughout the globe. So, Israel, Bibi, wake up!  The whole world is waiting!