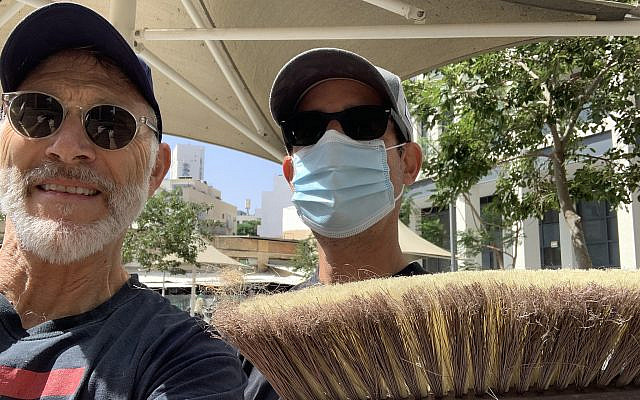 Not only do I believe that Israel can change, I have seen change already.

And I’m not only talking about the “Change Government” cobbled together by the centrist leader Yair Lapid to include members of Israel’s parliament from the right, left, and Arab Islamist fringe. There is no guarantee that the Knesset’s fragile mosaic will hold, and a successful 36th government is a long-shot. So, I’m thinking small.

One minute sign of positive change occurred outside my window. For the third week in a row, I sent out a simple message (in three languages) to the residents of all 154 apartments in my building complex.

This Friday, at 10:00 am, I will again make a symbolic gesture to clean our plaza a bit better. Anyone who wants to join me to work for an hour, and then talk about the plaza’s challenges afterwards, is welcome. 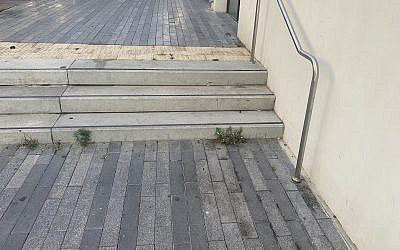 Overlooked But Not Forgotten (photo by Marc Kornblatt)

I have written here about this project before. For the third week in a row, only one person joined me. Like me, he is a volunteer member of our condo board. But here’s the thing. He was not the same board member who joined me before. He was new.

Three members of the five-person condo board have now come out to pull weeds and pry out cigarette butts embedded in the cracks between the plaza’s paving stones. That’s 60% of our building’s leadership, enough to pass a bill in the United States Senate! 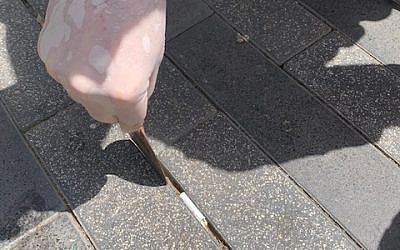 Getting Between the Cracks (photo by Judith Kornblatt)

From what I’d read on the WhatsApp group created by a faction of tenants unhappy with how our building management, and the former condo board, ran things, I knew there was a lot of pent-up energy in my complex. I knew a group of owners and renters had filed suit against management, the condo board, and the sole election board member, for a variety of alleged missteps. I knew there were renters who wanted a place on the new condo board. So, yes, I thought there would be a few more people willing to come join.

Of course, I know that I’m a newcomer from America who doesn’t quite understand the Israeli mentality.  I understand that Friday mornings in Israel are precious and that I’m not a celebrity who can draw a crowd. I also wasn’t looking to turn the plaza into the Garden of Versailles. I was more interested in chatting, and perhaps planning other community-building activities, with my neighbors.

In my old apartment complex back in the US, there were 40 households. We held monthly work days to clean up the grounds. We shoveled our own snow, raked our own leaves, and published a weekly newsletter. We called ourselves an intentional community made up of folks of different ages who shared similar views about the environment and social justice. One member described ours as a hippie commune where the members had all grown up and bought their own apartments.

Speaking of growing up, compared to America, Israel is a child.  At 74, America supported slavery and denied women the right to vote. The settlers, with their European-imported diseases and their Manifest Destiny, killed millions of indigenous people.

Considering how far Israel has come in such a short time, I feel optimistic. As a start-up nation with a tiny population, it has been able to defend itself against hostile neighbors from every direction. It has yet to adequately address the issues of inequality between Israeli Jews and Arabs, racism, violence against women, and the plight of stateless refugees, but, contrary to what its critics claim, it is no more a failed democracy than America, France, and the Netherlands.

If the Change Government can hold together long enough to rationally debate Israel’s future, without being distracted by baseless attacks from the opposition party, its embittered former prime minister, and American evangelicals who see the country merely as a tool to bring about the Second Coming, real change is possible.

As for my plaza-cleaning project, I don’t expect a warm-and-fuzzy crowd to suddenly appear one Friday morning and sing Kumbaya. For now, I’m content to know that my condo board colleagues don’t think I’m a complete fool for dreaming that we can create an authentic, caring community.

Whether they believe we can actually accomplish my pie-in-the-sky goal is another matter. For now, come next Friday, I’ll again go down to  the plaza with my gloves and pail, my scraper, broom, and dustpan. We’ll see where things go from there.

About the Author
Filmmaker and children's book author Marc Kornblatt is the producer/director of the award-winning documentaries DOSTOEVSKY BEHIND BARS, STILL 60, WHAT I DID IN FIFTH GRADE, and LIFE ON THE LEDGE, and the web series MINUTE MAN and ROCK REGGA. He and his wife made Aliyah in 2019 and now live in Tel Aviv where, through his independent film production company REFUGE FILMS, he has produced OLEH HADASH, a web series about his experience as a new citizen of Israel, two pandemic-inspired series, THE NARROW BRIDGE PROJECT and TEL AVIV WALKS, and BLUE & RED, RESPECTFUL ENCOUNTERS OF THE POLITICAL KIND, a series celebrating civil discourse across the liberal-conservative divide.
Related Topics
Related Posts
Comments
Advertisement