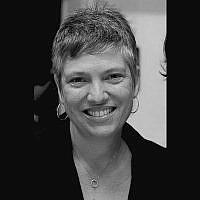 The Blogs
Andrea S. Arbel
Apply for a Blog
Advertisement
Please note that the posts on The Blogs are contributed by third parties. The opinions, facts and any media content in them are presented solely by the authors, and neither The Times of Israel nor its partners assume any responsibility for them. Please contact us in case of abuse. In case of abuse,
Report this post.

As Israel and the global Jewry celebrate the Jewish state’s 70th birthday for this year’s Yom Haatzmaut (Israeli Independence Day), it is natural to not only enjoy the moment, but also to think ahead to the country’s next 70 years. Israel and its people have always needed to display ingenuity and foresight to ensure that they survive and thrive, and the coming decades will be no different.

But what specifically is the key element to enriching Israel’s future? Many observers will immediately point to security or the economy, and that is understandable. Yet without the support of the Jewish people around the world, Israelis would not enjoy the vibrancy of their present or be able to look forward to an even brighter future. This support goes far beyond philanthropy. The Israel-Diaspora bond is intimate and emotional; Diaspora Jewry is able to spread positive energy for Israel worldwide because they feel inextricably connected to the Jewish State. Countless Diaspora Jews are de facto ambassadors for Israel, and they undertake this crucial duty with the utmost alacrity and without any financial compensation.

Connectedness does not occur in a vacuum. It takes years of hard work and thoughtful planning in the relationship-building arena. For more than two decades, The Jewish Agency for Israel’s Partnership2gether Peoplehood Platform (P2G) has been the leading initiative that cultivates the people-to-people relationship between Israelis and Diaspora Jews.

As a unique way of celebrating Israel’s 70th birthday, P2G has launched #2Gether_4_IL_70, a photo mosaic project in which members of P2G’s global communities can post photos of special moments from their local Israel-Diaspora partnerships to www.facebook.com/Partnership2Gether under the hashtag #2Gether_4_IL_70 and use seven P2G star icons that illustrate connectedness to Israel. This initiative is creating a memorable and vivid mosaic of global Jewry and demonstrates that each partnership contributes to something larger than itself, enabling its impact in Israel and the Jewish world to multiply. Visitors to the P2G Facebook page can already view photos from partnerships between the Southeastern US and Hadera-Eiron, Delaware and Arad, Great Britain and the Northern Galilee, Palm Beach and Tzahar, Toronto and Eilat-Eilot, and many more worldwide.

This special Yom Haatzmaut is also witness to Jewish community mega-missions coming to Israel during which they will spend quality time and celebrate with friends and family in their partnership regions spanning from the Negev to the Galil. By connecting 450 Jewish communities around the world with 46 city-to-city and region-to-region partnerships, P2G creates enduring relationships and emotional investments that establish the bedrock of a global community. This includes a vast variety of people-to-people programs and personal interactions that engage 350,000 Israelis and overseas counterparts each year.

Before celebrating Yom Haatzmaut however, Israel first honors Yom Hazikaron (Memorial Day) for its fallen soldiers. Through P2G, Jewish communities around the world stand in solidarity with Israel and their partnership regions. This sentiment is embodied by our Remembering 2Getheter project in which Jewish high school students in Columbus, Ohio learn about and commemorate fallen soldiers from Kfar Saba in a very personal way. Through this program, these young people explore the issues of bereavement in Israel, while they create ties between the students in Columbus and the families of fallen soldiers in Kfar Saba. The participants learn about the stories of specific fallen soldiers and then present the results of their work on posters hanging in the Columbus Jewish Center.

Additionally, the partnership between Sovev Kinneret and the Jewish communities of Milwaukee, Madison, and St. Paul has uniquely memorialized Sgt. Nadav Raymond, 19, who along with four fellow soldiers was killed during Operation Protective Edge when terrorists infiltrated the Gaza-border kibbutz of Nahal Oz. The five families of the soldiers killed in the Nahal Oz infiltration made a video that was screened before Milwaukee’s Jewish community during an Israeli Memorial Day ceremony, while 10 members of a visiting Israeli youth delegation lit a candle in memory of a fallen soldier or terror victim they knew.

P2G continues to connect Israel and the global Jewry throughout the year and in recent years has been building upon its platform. For example, the Global School Twinning Network is a flagship program which provides hundreds of schools in Israel and across the globe with joint programming and personal connections between their students and teachers. The Ministry of Education and Ministry Diaspora Affairs have also joined this partnership as strategic partners to significantly expand its global reach over the next three years.

In addition, in 2017, P2G launched G2: The Global Intergenerational Initiative, a year-long opportunity that allows Jewish pre-teens in Israel and the Diaspora to engage and learn from the values and heritage of their grandparents; and 248 Community Action Network, which is empowering an international network of “Jewish Doers” who will work to harness the power of the global Jewish collective by implementing easily replicable innovative ideas and practices.

On this Yom Haatzmaut, it is critical to understand that Israel and global Jewry have a shared fate with each having something unique to give. Maintaining and growing a deep and personal partnership is the key to the ongoing actualization of the Zionist dream in the State of Israel. The Jewish Agency and P2G are ready to keep the momentum going and to take Israel-Diaspora connectedness to unprecedented horizons.

Andrea S. Arbel is Director of Partnership Unit at The Jewish Agency for Israel.

About the Author
Andrea S. Arbel is Director of Partnership Unit at The Jewish Agency for Israel.
Related Topics
Related Posts
Comments