The Israel-Gaza relationship. Where has it come from, and where is headed? Good question! That was the topic of a fascinating evening of lectures in which I had the pleasure of participating last night at Ashkelon College.

The lectures were held in conjunction with “The Friday Cathedral” group and “The Levi Eshkol Institute”. It was another one of several events that have been taking place during this past year since Operation Protective Shield, attempting to examine the past, but also and more importantly look forward to future possibilities. By analyzing the situation, and pinpointing opportunities, there is a chance to direct political processes in a way that could potentially offer a long-term solution for our region.

Last night’s Conference attracted 150 participants who were given the opportunity to hear speakers presenting a range of views on our relationship with Gaza. (Unfortunately, journalist Yifat Ehrlich, couldn’t participate, and her unique perspective was lacking).

The evening opened with Dr. Udi Manor providing a historical overview of the relationship between Israel and Gaza since the founding of Israel.

Manor was followed by Major General (res) Giora Eiland, who presented a practical and straightforward approach regarding the current political situation in Gaza.

He began his talk by referring to the importance of understanding the narrative of one’s adversary, and how the misunderstood or false narrative that we recite to ourselves regarding Gaza, leads us astray, time after time. Eiland went on to explain that, whether we like it or not, the Gaza Strip is a country in itself. It has clear borders and a de facto Hamas-controlled government, which was officially and (relatively) democratically elected in 2006. Hamas enjoys wide support among the Gazans and legitimately represents them (otherwise, they would not have managed to build their military infrastructure, including the tunnels). Therefore, we must be willing to assess the situation carefully to find common interests shared by Palestinians in Gaza and Israel. Both sides, for example, are interested in forging a long-term period of non-violence

Eiland emphasized that the situation must be carefully and attentively assessed, with an eye to identifying vested interests common to both sides. Building such strategies based on accurately assessed common vested interests would enable a climate of long-term non-violence, providing, of course, that the interests are important enough for all sides to be willing to pay the price incurred.

Israel’s vested interests are solely security-oriented. There are no issues of defining borders, nor are there economic or political conflicts of interest.

The main Gazan vested interest is the rehabilitation of Gaza, including a port. The price for this should be disarmament of Gaza. Eiland explained that this, in fact, would be in Israel’s best interests, as well. However, he also pointed out that since prevention of another round of Israeli-Gazan violence is low on the vested interest scale for both the Palestinian Authority and Egypt, Israel should be careful NOT to make the mistake of leaving the “keys for the negotiations” in the hands of the parties least interested in finding a long-term solution.

If, Eiland says, Gaza is viewed as a legitimate state in itself, with the Hamas as their government, and if there are infractions of disarmament agreements, its infrastructures would be considered legitimate targets. As he explained: from Israel’s strategical standpoint it is far better to be in negotiations with a legitimate country than having to try to conduct arbitrations with a terrorist organization.

MK Omer Bar-Lev, co-chairman of the Knesset’s new Lobby for Frontline Border Communities, spoke about the importance of preserving the Jewish character of the state, hence the necessity of the Two States for Two Peoples solution. He further reinforced Eiland’s comments regarding the priority that needs to be given to the rehabilitation of Gaza and the creation of their national infrastructure which would constitute a strategic asset for both sides. Bar Lev summed up by claiming that the present situation of stagnation is the most dangerous situation for the region to be in and has been festering for the past few years.

Finally Ohala Keenan, an art therapist who works with children in the Ashkelon area and who is affiliated with the Movement for the Future of the Western Negev, described the difficulties experienced by children in the western Negev following last summer’s war and the psychological harm inflicted upon them, as well as the children across the border in Gaza. She offered the depiction of one boy, who, among other symptoms, sleeps in his shoes so that he can be ready to run in case of an incoming missile attack. She treated a girl who chose to sleep in her jacket last winter, instead of using her blanket, for the same reasons. She meets with children who are unwilling to be alone in a room at any time of day, under any circumstances, whether it be to sleep, shower or go to the toilet.

During last year’s war, she also worried about the children who were terrified and did NOT have saferooms on the other side of the border. She knows that the great majority of them have no access to psychological support. The situation in which they live, the rubble in which they are growing up, can only be cultivating another generation of Israel-haters

However, she is able to provide words of encouragement to the children with whom she works, trying to convince them that their fears will pass; that they will learn to overcome them. To us, the audience, she stated: “This untenable situation can not continue.”

Anat Hefetz, from the Movement for the Future of the Western Negev moderated the Conference.

While I must admit that Dr. Manor’s historical review was too fast for my complete comprehension, personally, I thoroughly enjoyed listening to Eliand and Bar Lev’s views, which reinforced my hope that solutions ARE possible if we redirect our efforts. Keenan’s depictions of her clients further opened a window for me into the psyches of the kids who live in my area. (As a sidenote, despite her descriptions, I was extremely happy to hear a report just now on the news, that 77% of our high school students in the Eshkol Region, passed their matriculation exams, in spite of the difficult period they lived through. That’s a 17% rise from last year.)

The resilience and determination of our residents, the grassroots Movement for the Future of the Western Negev, as well as the rays of light from last night’s speakers, leave me with an optimistic faith in the people who live here. As far as I am concerned, that is an essential ingredient for survival for those of us who live so near to the Gaza Strip that we can hear the Imam’s call of their faithful to prayer from what is left of the mosque that was used as a sniper tower just a year ago. 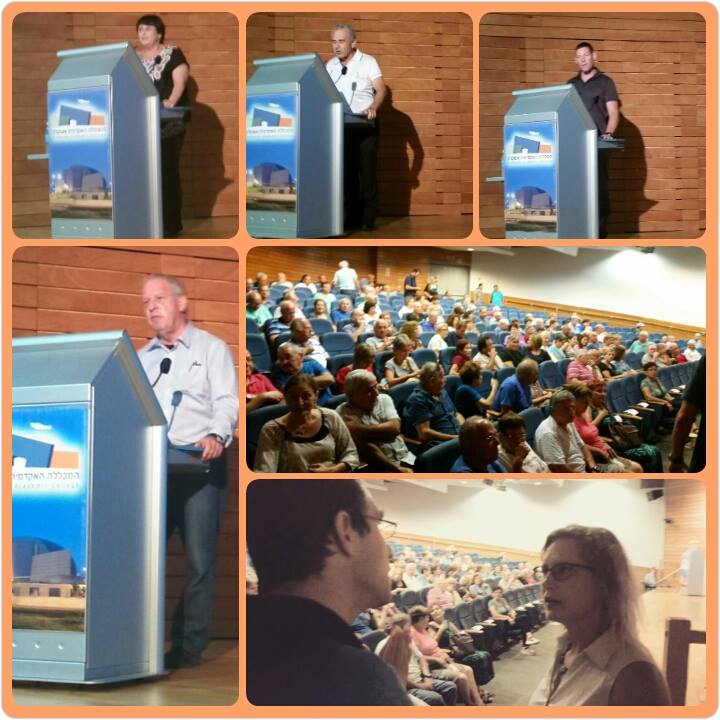