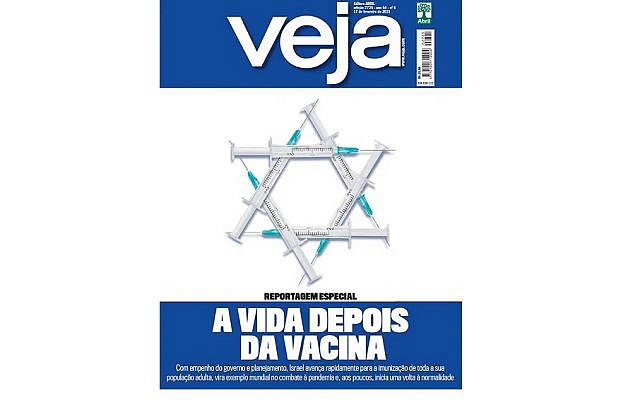 While most developing countries — like Brazil — struggle with the pandemic caused by Covid-19, Israel is seen as an example to be followed.

VEJA, Brazil’s most influential magazine, devoted this week’s cover story to praising Israel’s vaccination efforts and healthcare system. In a rare move, Brazilian media puts Israel in a positive light, stating in the cover headline how the Middle East country shows the world what to expect from “Life after the vaccine”.

The story shows how Israel advances towards the immunization of its entire adult population, being the first place in the world ranking as for February, 2021.

According to the magazine, Israel “stands out not only for its success in ensuring an adequate supply of vaccines, but also for its exceptional performance in distribution”. In comparison, Brazil has vaccinated 2 in every 100 citizens, while Israel indicators show an impressive ratio of 69,4 per hundred.

Offering its readers a positive scenario, the magazine mentions statistics and testimonies from the Israeli population, also praising primeiro-­ministro Benjamin Netanyahu, as a strategic leader during the whole pandemic.

“In Israel, the sensation of light at the end of the tunnel is palpable, although cautious and pragmatic”, says Veja, ending the report with a “mazel tov”.

It is a relief to see Israel being hailed by a prestigious magazine, since Israel is usually portrayed by Brazilian media with a barrage of criticism. Good lessons from Israel during the pandemic can be beneficial for the public’s perception in the country.

The article (in Portuguese) can be read here