The Blogs
John L. Rosove
Apply for a Blog
Please note that the posts on The Blogs are contributed by third parties. The opinions, facts and any media content in them are presented solely by the authors, and neither The Times of Israel nor its partners assume any responsibility for them. Please contact us in case of abuse. In case of abuse,
Report this post. 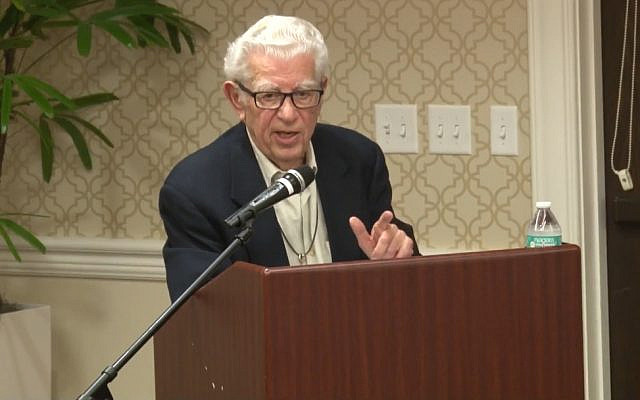 Rabbi Richard Hirsch delivers a Martin Luther King Day lecture titled 'Israel and American Jewry — why we need each other' at the Sinai Residences in Boca Raton, Florida, January 15, 2018. (YouTube via JTA)

Few people I have known in my life have had more of an influence on my thinking and focus as a Jew, a rabbi, and a Zionist than Rabbi Richard Hirsch (1926-2021) who passed away this morning (August 17, 2021). An extraordinary human being is not hyperbole when speaking of him. We can credit Rabbi Hirsch with instilling strength in the Reform movement in Israel and around the world, with building significant Reform institutions in the United States and Israel, and with inspiring thousands of people over his more than seven decades of Jewish and Zionist activism.

I first met “Dick,” as all his friends knew him, in the summer of 1973 in the Library of the Hebrew Union College in Jerusalem. Rabbi David Forman, of blessed memory, then the assistant dean of students for the first year Reform Rabbinic Program in Israel, gathered my class together to meet Rabbi Hirsch. I quickly knew, as I sat listening to him, that I was in the presence of a great man.

Already at that time, Dick had established the Religious Action Center of Reform Judaism in Washington, DC, and inspired Kivie Kaplan, a wealthy friend, to donate an old four-story embassy building on Massachusetts Avenue in which Dick set up shop and drew in other Jewish organizations to pursue their work on behalf of human rights and civil rights. He befriended virtually everyone of consequence in the nation’s capital, including President Lyndon Johnson, then Israeli ambassador Yitzhak Rabin, every significant interfaith leader, including Dr. Martin Luther King, whom he gave office space in the RAC building whenever he came to DC.

A provocateur by nature, quoting frequently in Hebrew and English from the biblical prophets and Rabbis of the Talmud, Dick recognized that the Babylon-Jerusalem mythology of Jewish history in which wealth, power, and prestige was invested primarily in Jewish communities outside the Land of Israel, Dick sought to transform the historic mythology into what he called the “Broadway/Off-Broadway metaphor,” in which Israel became central to the survival and well-being of the Jewish people, and the Diaspora communities, though important, were satellites circling the central planet of Jerusalem and the Jewish state.

As president of the World Union for Progressive Judaism representing the Reform movement worldwide, Dick moved the international headquarters of our movement from New York to Jerusalem, and he raised the money necessary to purchase the land next to the Hebrew Union College on King David Street and build the international center of Reform Judaism there. He justified his efforts saying that for Reform Judaism to be an historic movement, it had to have its center in the Jewish state.

Born in Cleveland, Ohio in 1926, Dick loved the Hebrew language from the time he was a boy and set his mind to become a fluent Hebrew speaker. He entered the Hebrew Union College at a time when the first-year program was not based in Jerusalem. So, he went on his own and studied at the Hebrew University.

One summer, he directed an American Jewish summer camp and met his beloved wife, Bella, who had come from Israel to teach and work with the staff and children. Bella was born in the former Soviet Union. They quickly fell in love and married. Within three and a half years, they had four children. Recognizing that, without Israel, there would be no future for the Jewish people, Dick and Bella made aliyah in 1972 to live and make a contribution to the Jewish state.

Dick had a lot of help in Israel and among his friends internationally in pursuit of these goals, but he was the motivating force, the intellectual spark, the charismatic initiator, and the irrepressible creative builder. Today, the Israeli Reform movement has an expansive campus on King David Street, near the famed King David Hotel, has ordained more than 120 Israeli rabbis, has built two kibbutzim, close to 50 synagogue centers throughout Israel, the Leo Baeck School of Haifa, the Israel Religious Action Center in Jerusalem, pre-army educational and social justice programs for post-Israeli high school students, and countless kindergartens and schools strategically placed throughout the state.

Every two or three years, over the course of my congregational rabbinate, I brought my congregants to Israel to learn and meet Israelis and people across the political and religious spectrum. Dick was one person I wanted my people especially to meet. The hour he spent with us each time is still remembered by everyone who sat at his feet and hung on his every word. A gifted storyteller who wove classic biblical and talmudic texts, as well as Zionist thinkers and historical figures into his remarks, Dick linked effortlessly his personal story within the greater story of the Jewish people.

Dick was the author of two books, both of which are worth reading: From the Hill to the Mount – A Reform Zionist Quest (Gefen Publ.: Jerusalem, 2000), and For the Sake of Zion – Reform Zionism: A Personal Mission (URJ Press: New York, 2011).

I loved Dick. He was one of my most important Zionist mentors. I love his son, Rabbi Ammi Hirsch of the Stephen S. Wise Free Synagogue in Manhattan. Dick loved that Ammi and I are dear friends and whenever I spoke with Dick not only did he remind me how much he appreciated Ammi’s and my friendship, but that we Reform rabbis have a sacred and solemn duty to the Jewish people to teach and motivate our communities to understand that Progressive Zionism is the social justice movement of the Jewish people, that to be a Zionist is not some narrow tribal cultish avocation, but rather the expression of our people’s unique mission to be purveyors of meaning and justice as well as advocates for a safe, strong, and secure Israel as the homeland of the Jewish people.

Dick was a friend to so many of us. He fought the good fight always, and he will be remembered not only by his family as a patriarch par excellence, but for the movement he inspired, the institutions he created and built, and the thousands he touched.

Zichrono livracha – May the memory of this righteous and great man be remembered for a blessing.

Here is a talk that Dick delivered in 2016 — worth watching: