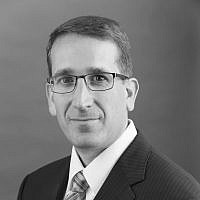 The Blogs
Joel Mann
Apply for a Blog
Advertisement
Please note that the posts on The Blogs are contributed by third parties. The opinions, facts and any media content in them are presented solely by the authors, and neither The Times of Israel nor its partners assume any responsibility for them. Please contact us in case of abuse. In case of abuse,
Report this post.

On June 30, 2022, my youngest son, Seth, was called to the Torah for his Bar Mitzvah. He is the youngest grandchild on both sides of our family to reach this milestone. Unlike his older brother and sister who had traditional B’nai Mitzvahs at our synagogue in Las Vegas, he decided he wanted to mark this occasion in Israel.

My wife and I have been to Israel more than a dozen times between the two of us. We have been very committed to the State of Israel and the homeland of the Jewish people. We were overjoyed for our son to have his Bar Mitzvah in Israel and to have our three children come to Israel for the first time and experience what we believed would be a life-changing event. We never contemplated that it could be a negative Jewish experience for our children. Unfortunately, we were wrong.

My first trip to Israel was on the March of the Living when I was 17 years old. I am embarrassed to say, but before that trip, I did not understand the importance of Israel to an American Jew. I believed that I was able to practice Judaism in America and that Israel had very little impact on my daily life. It was on the March of the Living that I fell in love with Israel. I finally understood that there must be a place for Jews to be “home”. For the next 30 years, I continued to believe that, although I lived in the United States, Israel is the home of the Jewish people, and it needs to be protected. On what should have been one of the happiest days of my life, this belief was shattered.

In the very early hours of the last day of June, my family and I excitedly traveled to the “egalitarian” section of the Western Wall.  My son greeted our beloved Rabbi, Felipe Goodman, and started to lay tefillin. He had been practicing laying tefillin for months and was very excited to complete his training and use them officially. It’s hard to describe the feeling we had looking out over the ruins of our ancient history and seeing our son take his place among the generations and accept his responsibility to be a Jew.

The serene sights and sounds of prayer were harshly and abruptly broken. A group of teenagers started lurking around the platforms where our and two other B’nei Mitzvahs were taking place. Within a few moments these teenagers, some of whom were dressed in black hats and tzitzit, started blowing whistles and holding signs. Everybody stopped. We looked up and saw these Haredi teenagers trying to disrupt our prayers. I confronted some of them and asked, “What are you doing?”  “Why are you here?” They held up signs in Hebrew that I did not understand at the time. They gave me a response to my question that shocked me. They said we were not Jewish. I attempted to explain to them that my son is being Bar Mitzvah’d, but they would not have anything of it. They continued to harass us. They attempted to get closer to our group, but our family members stood in a half-circle around my son as he chanted Torah and protected him from these hoodlums trying to attack us.

I was relieved when I saw the police show up. I thought for sure this nonsense would be put to an end and we could continue to watch my son take his place among the Jewish people. Once again, I was mistaken. The police did little to nothing to stop the disturbance and sometimes violent attacks that occurred. They stood there and watched as these thugs attacked people doing nothing more than praying. The Israeli Police stood there as the Haredi teens attacked Jews.

It was at this moment that my heart broke. I realized that not even in the State of Israel, the homeland for the Jewish people, am I allowed to pray freely and safely. My son, on his Bar Mitzvah, is told he is not Jewish. Not because these vandals thought so, but more because the government of the State of Israel thought so. The police inaction said more to me than anything those teenagers said to me. I started to feel like I did as a teenager, that the State of Israel does not mean that much to me as an American Jew.

The teens continued to stand on top of tables, blow their whistles, and abuse the people attending the B’nei Mitzvahs. I became embarrassed that my family members who traveled over 7500 miles to be in Israel for the first time, saw that Israel does not want them there. I was embarrassed that after all my efforts to support Israel, I was considered less than worthy to the government of Israel.

In that dark moment, it was the Bar Mitzvah who showed me the way out of the darkness. My son, despite the screaming, the cajoling, and the whistling, DID NOT BREAK. He persevered and continued to take his place. He accepted his responsibilities as a Jew, even when the “Jews” around him were telling him otherwise. He finished his service and walked with his head held high through the crowd of haters and hooligans. I was proud of him! I was not proud of the State of Israel. I was not proud of the “home” for Jews around the world.

Now that the Bar Mitzvah is over it is time to ask the question of why. Why is this allowed to happen? I do not blame the brainwashed teenagers for what they did, I blame the State of Israel for allowing it to happen. I blame the reasonable people for allowing the extremists and zealots to take control.

It is time for there to be real change when it comes to how Jews are treated in the State of Israel. Since June 30, I have seen a trickle of statements about what happened that day. However, I have no interest in halfhearted statements. Unless there is real action or change, I am not interested in what you say. First and foremost, there must be protection for people praying. How will the next generation of Jews stand and fight for Israel, in a sea of political hate, when Israel won’t protect their right to pray.  It is not too much to ask that the State of Israel guarantees that all Jews have a right to pray respectfully.

Jerusalem is a city of many religions, but it is the Jews who aren’t allowed to pray among Jews.

About the Author
Joel Mann is a criminal defense attorney in Nevada. He has argued many cases before the Ninth Circuit Court of Appeals and the Nevada Supreme Court. Joel is very active in the Jewish community in Nevada. He served as the youngest president of the Conservative Synagogue in Las Vegas, Temple Beth Sholom. For more than 10 years, Joel has been on the regional board of the Anti-Defamation League in Nevada. Joel and his wife live in Summerlin, a suburb of Las Vegas, with their three children.
Related Topics
Related Posts