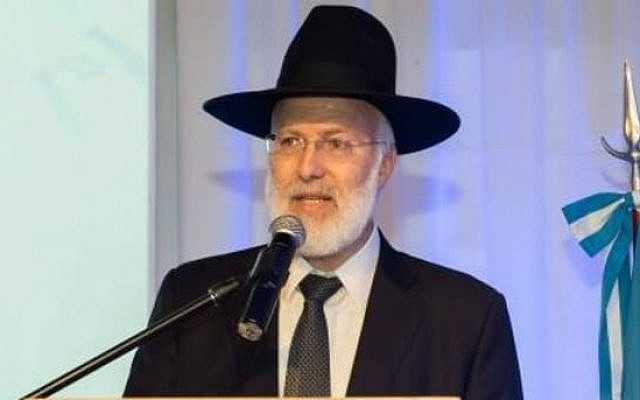 My friend and colleague, Rabbi Gabriel Davidovich, Chief Rabbi of Argentina, was brutally assaulted and is currently hospitalized in serious condition. The perpetrators knew exactly who he was and what they were doing.

During my role as the Chief Rabbi of neighboring Uruguay, I had the honor of working closely with Rabbi Davidovich on several cases and issues. I was a guest of his on numerous occasions in both his office and his home, including a special Shabbat that our families shared together in their home in Buenos Aires.

We should have no doubt that this was a planned, specific and targeted anti-Semitic attack. Rabbi Davidovich, as is the Chief Rabbi of any country, is the public face of Judaism in that country. He is the address that Jews, non-Jews, government and media turn to as the Jewish authority in the country. During my own stint in Uruguay, I was told on more than one occasion, that I was the target of potential anti-Semitic attacks and at certain periods was asked to keep a lower public profile and use greater caution. Every Yom Kippur, the community of Montevideo was on high alert and I was escorted by multiple security and police members.

While the public outcry and condemnations of the attack are appropriate, including those from Israeli government officials, they are ultimately meaningless and are a far cry from what Israel should be doing in this case and in the case of the growing number of anti-Semitic attacks around the world.

Israel must have more involvement and greater responsibility in the security of Jewish communities around the world.

The Israeli police force has a permanent police officer on the ground in South America. He is an extremely capable and dedicated public servant, who I have had the pleasure to work with in the past. His main role is to intervene when there is any trouble that an Israeli citizen has in South America, most commonly with the many young post-army backpackers who spend months at a time backpacking through South America.

Currently, our Jewish brethren must take care of their security needs on their own. Some communities, the wealthier and better organized ones, manage to put together reasonable security protocols, get volunteers to help with standing guard or hire professional security guards. That’s a good start but will generally not be enough in the case of an attack, neither to prevent one, nor to know how to adequately respond.

What is required is a serious commitment by the State of Israel to the security of Diaspora communities around the world, against the real and present threat of anti-Semitic attacks that are growing in their frequency, brazenness and deadliness.

We need Jewish communities to get the same intelligence, monitoring, analysis and threat identification as Israeli embassies around the world do. The Jewish communities of the Diaspora are the living, breathing, communal embassies of the people of Israel. And they are the largest targets and the most vulnerable. Israel has the capacity, the capability and the moral obligation to upgrade the security and protection of our brothers who are under this real and present danger.

The calls for Aliyah from these communities, while well-meaning, entirely miss the point. Israel is the home of the Jewish people and all are actively encouraged to return home. However, the overwhelming majority of Diaspora Jews have no plans to leave their homes of decades and generations to emigrate to Israel. They will stay in the Diaspora. That does not excuse us, the Jewish people in Zion, from our responsibility to help and protect our brothers wherever they are.

Recently, I joined the new Israeli political party, Zehut, under the leadership of Moshe Feiglin. I was elected in our primaries as the Diaspora representative, a role for which I feel a deep responsibility. It is my intent, that when I enter the incoming Knesset, I will do everything in my power to enhance the connection between Israel and our Diaspora communities. That includes serious and professional assistance in protecting them.

To my dear friend, Rabbi Davidovich and to my brothers in Argentina: we are with you.