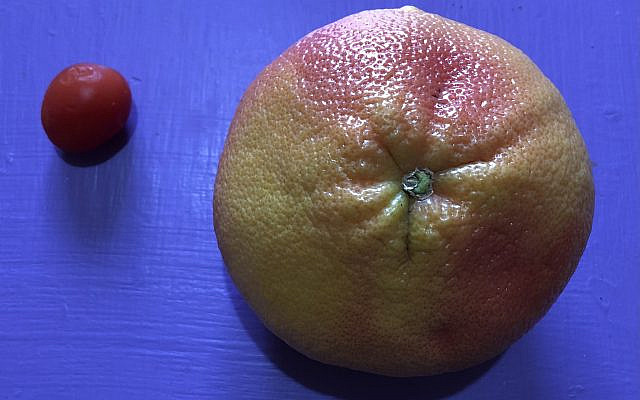 What have a tomato and a grapefruit got to do with it? Photo by Shoshana Lavan

More than ten years ago I went on Safari in Uganda. Images of that experience have stayed at the front of my mind; there was a giraffe, an elephant and her baby, some kind of monkey and a crocodile, side by side at the edge of a watering hole, drinking together. It was the first time I’d been in nature and really understood: animals only kill each other to survive. Why wasn’t the crocodile interested in eating any of the other animals? Because he was thirsty, and only there to drink. He wasn’t going to kill for no reason.

People have told me for many years I am a very strong minded and opinionated person. It’s not necessarily a bad thing – I don’t try to persuade others of my point of view and I respect others’ opinions. I’m a vegan, but not the type of vegan who won’t sit at a table with people who eat meat. Everyone must make their own decisions in life. However, it is incredible to me that people who keep dogs or cats or rabbits as pets consider it perfectly valid to eat animals, and yet they would never dream of eating their pet. I also find it disturbing how people who are prepared to eat meat would often not be prepared to kill it themselves. And above all, ignorance of the way we treat our animals really galls me. It’s not as if we haven’t got the whole internet to do our research.

But live and let live. It’s taken me many years to teach myself to stay calm and remember I only live inside my head, and I have to accept that everyone else lives inside theirs.

Not everyone believes in animal rights, perhaps forgetting we are animals too.
And yet, there are certain fundamental principles which are unquestionable. I’m talking about human rights. I’m talking about shared values of equality and respect. The rights of dignity and fairness. In fact, I’m talking about Israel’s Declaration of Independence in 1948:

The State of Israel will foster the development of the country for the benefit of all its inhabitants; it will be based on freedom, justice and peace… it will ensure complete equality of social and political rights to all its inhabitants irrespective of religion, race or sex; it will guarantee freedom of religion, conscience, language, education and culture…

A few weeks ago I had a sudden wake up call. I was at a gathering of my sharing group, and one of my friend’s shared how she had, for the first time ever, hugged her daughter’s Arab Israeli kindergarten carer and had realized she really liked her. But she was so surprised. It was the first Arab she had ever come across with whom she had made a friendship, and she had always been taught Arabs were evil and wanted to kill all the Jews… This, by the way, was from her Jewish, religious education in England.

Since I moved here nearly two years ago, people have often told me there are Jews out there who hate all the Arabs, and Arabs out there who hate all the Jews, but I just did not believe it. How could I, living in the North? Our Arab friends come to our house for dinner, we go to their houses for tea, we go to music events and organize peace demonstrations together. Arab Israelis here have sometimes welcomed me and accepted me more warmly than Jewish Israelis. I don’t even feel the need to say Jewish this, Arab that. We’re all Israeli. And if some people would like to go and live in a Palestinian state, that’s also fine. We will go and visit our friends there too!

It’s all very obvious to me. When you treat another human being as a human being, when you befriend them and respect them, there is not one moment where you would even think about killing them.

But my friend at work tells me, “I read your blogs; they are well written, but you are only just learning about this country. You really are very naïve.”

Interesting viewpoint. Indeed, I am only just discovering this country. But I’ve studied human nature and the nature of good and evil, since I was old enough to read. I studied Holocaust literature at university, and Freudian theory too. In fact, I’ve never stopped studying human nature, having been a teacher of English Literature for over twenty years.

It all seems obvious to me. Let’s whittle it down to a fruit shop. What would happen if all the carrots were sold in one shop, the tomatoes in another, the oranges in another, and so on and so forth. Well, apart from being very annoying to people who wanted to buy all sorts of different fruits and vegetables and had to keep going to different shops, there’s something much more basic here. If you only went to one shop, you would only get to know one type of fruit. Let’s say, tomatoes. Then, one day, if you ever saw a grapefruit, you might be very scared of it. You might run away from it. You might eat it with its skin on and think it was disgusting, and never return to that shop.

Why am I talking about fruit shops? I lived in Shropshire, England for ten years. We were one Jewish family out of two in the whole county; we made up fifty percent of its Jewish population. In Shropshire there are three hundred and nineteen thousand, one hundred and eighty-nine people. Us Jews were therefore 0.002 percent. Many of them had never met a Jewish person. But oh yes, they had heard all the stereotypes: big noses, mean with money, rich, to name a few. I spent a good few years teaching the students and teachers I met about what being Jewish really means. And it always surprised them I don’t have a big nose at all.

Where am I going with this? After all, now I live in a Jewish country where I am no longer the minority, so I can relax, can’t I?

Last night, I went to a shared society political meeting in a nearby kibbutz which broke my heart again (it’s been happening a lot lately, especially with the recent death of the four-year-old boy in Bir Al-Maksour). Jews and Arabs sat together to discuss how we can make a shared, equal society without violence, based on respect and friendship for each other.

One of the politicians even told us how, when he had asked in the Knesset, what about all the illegal buildings the Arabs are having to construct because they don’t have permission to build, the response was, “Why are you bothering to worry about the Arabs?”

My husband responded to him, “if someone had said that in England – why are you bothering to worry about the Pakis/blacks/Jews etc.? – they would have lost their job, never been allowed to work in politics again and probably prosecuted.” But this was just at the beginning of the meeting. What the panel had come together to talk about, was their new kibbutz dual-language kindergarten, and their new Arab- Jewish Mechina (the pre-army year course students can choose to go to after high school).

“These are the solutions,” they said, enthusiastically, and everyone nodded and clapped. And I’m sitting there thinking, are you serious? You think you are changing the world with these ‘new, innovative’ ideas? They are absolutely FUNDAMENTAL to EVERY society, every community, every country, every city, every town, everywhere!
Of course, the answer is, from the very beginning of a child’s life, make sure they are with other human beings, different human beings, irrespective of religion, race or sex. Why is this such a novel idea? Why are politicians having to go round and spread this idea as though it is a new invention for harmony in Israel? It was in the Declaration of Independence! It should be absolutely and totally the very first foundation of our society.

If our children learn, work, play and eat together, speak Hebrew and Arabic together, if they then begin to read and write and discuss together, study for matriculation together, go to Mechina and serve the country together, then Israel will finally, and beautifully, be keeping the promises it made at its inception.

Yes, I’m obviously naïve. But it seems so clear to me, the solution to all of this.
We are human beings with fundamental human rights. It’s about time every one of us remembered that.

Let’s start again, and get it right this time.