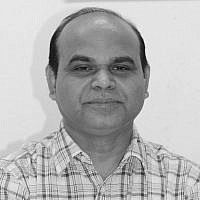 The Blogs
Sunil K. Choudhary
Apply for a Blog
Advertisement
Please note that the posts on The Blogs are contributed by third parties. The opinions, facts and any media content in them are presented solely by the authors, and neither The Times of Israel nor its partners assume any responsibility for them. Please contact us in case of abuse. In case of abuse,
Report this post.

Nearly 71 percent of the 6.78 million voters cast their votes to the elections of the 25th Knesset on November 1, 2022. Falsifying the consecutive exit poll results predicted by the Pollsters and Poll Agencies in Israel since the fall of the fourth government in less than four years, Benjamin Netanyahu’s Likud-led right-wing block finally catapulted to power with a stunning electoral victory. In a unilateral parliamentary house of 120 seats where proportional representation-based list system of parties operates, Likud with its right-wing allies – Religious Zionism, Shas and United Torah Judaism scored 64 seats and 49 percent of votes to be at the helm of affairs in Israeli politics again, after a short interregnum.

Israel was marred by political turmoil since April 2019 where four elections to the Knesset failed to produce political stability, alternating Prime Ministers from Netanyahu to Naftali Bennett and Yair Lapid – each serving for a short span of time. With electoral threshold rising to 3.25 percent enabling parties with seats in the Knesset, alignments and re-alignments have become the distinct feature of Israeli politics, characterizing the Israeli party system in its formative phase as a ‘baffling system’ (a la Sartori). However, transitions and transformations have imparted new meanings to the working of Israeli politics for past one and a half decades. Parties and political practitioners, electors and electorate, media and mobility have changed the very nature of democratic politics of Israel. The 2022 Knesset elections are testimony to the changing electoral reality in Israel.

One could highlight three salient characteristics of the electoral outcome for the Knesset 2022 which has brought back a right-wing government under Netanyahu to the canter of power.

I. Strengthening and Streamlining the Alliance

Israel has witnessed re-alignments of alliances, particularly with the emergence of centrist parties providing alternatives to the existing coalitional system. Beginning with Shinui, Kulanu, Kadima, Blue and White and Yesh Atid, the centrist political formations have gained great political ascendancy over the decades. Most of the centrist parties happened to be formed by the media persons or military personnel. However, the Centrist political formations have not lasted for long, notwithstanding their dominance in some of the Knesset elections at some point of time.

Anticipating the limitations of the centrist parties and their non-sustainability, Netanyahu continued to strengthen the right-wing and religious parties since the election notification for 1 November 2022. It was on his personal initiative that both Religious Zionism led by Bezalel Smotrich, Otzma Yehudit by Itamar Ben Gvir and Noam Party decided to fight under a common slate. Shas and United Torah Judaism – the two strong Haredi parties – have been the ardent supporters of Netanyahu since the beginning. Despite fighting on a common right-wing platform under Netanyahu, all the parties of this block decided to sign surplus-vote agreements to prevent wastage of votes.

Netanyahu thus largely succeeded in brokering significant alliances between and among smaller factions on his side of the political spectrum, much before the submission of final slates by parties to the Central Election Committee. Netanyahu’s opponents failed to reach such an agreement with the parties of their alliance, resulting into some of them – Meretz and Jewish Home falling beneath the threshold.

Sharing commonalities in terms of history, culture, society and polity, both India and Israel have been celebrating the 30 years of their full diplomatic relations in 2022. Netanyahu has been a great admirer of Narendra Modi, the Prime Minister of India and Modi has been a great supporter of Netanyahu. The visits of the two Prime Ministers since the formation of right-wing governments in the two democratic nations have witnessed democratic and defense ties getting strengthened over the years.

Moving beyond the hard core right wing ideological line, Netanyahu did not leave any opportunity of getting Likud connected with the Arab Israeli voters, constituting 20 per cent of the population. Netanyahu’s promise of undertaking the developmental projects, fighting crime in the Arab pockets, lowering the prices, promising a ‘New Era’ in Jewish-Arab relations in Israel broke the erstwhile Arab untouchability vis a vis Likud. Bibi, as he is popularly called in the political circles, Netanyahu made use of his nickname, claimed to receive from the Arab electors during 2021 elections, as ‘Abu Yair’. In one of the Arab-translated election campaigns, Netanyahu could be seen saying that both the Jews and Arabs could dance together in Israel if they could do so in the streets of Dubai.

Whether Netanyahu’s approach of ‘Sabka Vikas, Sabka Vishwas’ [Progress of All, Protection for All] with its focus on the Arab Israeli voters, aimed at attracting the Arabs to the polls or distracting them from the polls, it did make a difference in the voter’s turnout for the Arabs in 2022 elections.

III. Salience of the Silence: The Silent Voters

Society in Israel has been steadily moving away from its ‘boiling pot’ syndrome towards a conciliatory society built on the principles of multiculturalism, viz., ‘Multicultural Pot.’ With political ideologies waning, the voters in Israel, as in other parts of the democratic world, have become more awakened and assertive. One could also see a shift in voting behavior from floating to silent voters. Characterized by the author ‘decisive without being expressive,’ Silent Voters have increasingly been the new catalyst of change in democratic politics.

Realizing the Salience of the Silence, Netanyahu made effective overtures to the young voters, secular voters, women voters, LGBT voters and the Arab voters to be characterized as ‘Silent Voters’. Notwithstanding fighting the 2022 elections with far-right groups like Ben Gvir’s Otzma Yehudit who once associated with the late extremist rabbi Meir Kahane and his Kach party which was banned from running for the Knesset elections due to its racist ideology, Netanyahu kept himself dissociated with Ben Gvir in sharing dais and electoral campaigns, wherever possible.

The 2022 Israel has mandated the return of a right-wing government under Benjamin Netanyahu once again. While the formation of a new government is on the anvil, Netanyahu would have to ensure that Governance should precede Government, Development to Devolution of Ministerial Posts, and Conciliation to Confrontation of Interests as reflection of the New Israeli Mandate, 2022.