Last week, Jewish media erupted after Israel’s rabbinic court rejected a conversion performed by Rabbi Haskel Lookstein, rabbi emeritus of Congregation Kehilath Jeshurun (KJ) and principal of the Ramaz School in New York City. The Petah Tikva court prevented Nicole, an American woman who converted under esteemed spiritual leader Rabbi Lookstein, from marrying her Israeli fiancé, claiming that she is not a Jew.

The ultra-Orthodox Rabbinate responsible for this decision controls all religious activity in Israel, including marriage and conversion. The Rabbinate typically does not accept Reform or Conservative conversions, but its recent rejection of Lookstein’s conversion poses, for the first time, a serious challenge to Orthodox authorities in the Diaspora.

Conversion in Israel is not a new issue; for months already, I have been involved in policies and Knesset debates related to conversion. These issues are only now coming to the forefront because the Rabbinate is telling a prominent, well-respected rabbi that his religious rituals are not truly “Jewish.” The conversion problem has reached a climax, and now is our opportunity to address this issue directly. 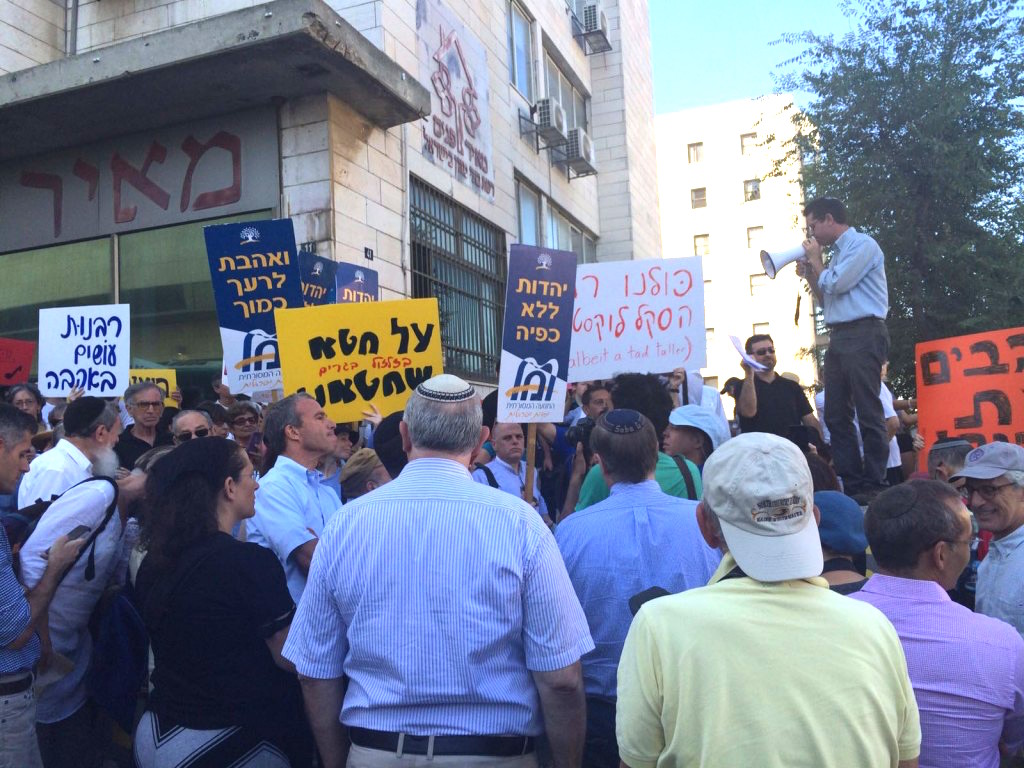 Protest outside of the Chief Rabbinate, July 6,2016 (Courtesy)

On a more general level, this case is representative of a broader problem in Israeli society — one that I am working to fight in Knesset. The rabbinic court’s rejection of Rabbi Lookstein’s conversion is just another example of the ultra-Orthodox judges acting as kings, taking advantage of their power, while pushing aside all other streams of Judaism.  In the past month alone, the Rabbinate has abused its power to prevent women from carrying a Torah at the Kotel, to prevent restaurants from obtaining the necessary kosher certification, to prevent Reform    and Conservative women from using mikva’ot, and now, to prevent non-ultra-Orthodox converts from being accepted as Jews.

It is evident that there was no halachic (Jewish law) consideration driving the judges’ decision-making process; rather, this is simply a struggle for power, status, and prestige.  The Chief Rabbinate has, in fact, approved of Lookstein’s conversion certificates in the past.  But now, the ultra-Orthodox judges fear that other sects of Judaism pose a threat to their religious authority, and therefore have recently become more stringent and isolating in their rulings.

But the State of Israel cannot make religious decisions that are based on preserving power.

Such actions by the Rabbinate further alienate Diaspora Jewry from Israel. Last week’s event is symptomatic of the already tenuous relationship between Israel and Diaspora Jewry.  The Rabbinate’s single-minded rulings on kashrut, Kotel prayer, mikva’ot, and conversion are making it easier for Jews outside of Israel to find faults in Israeli society. 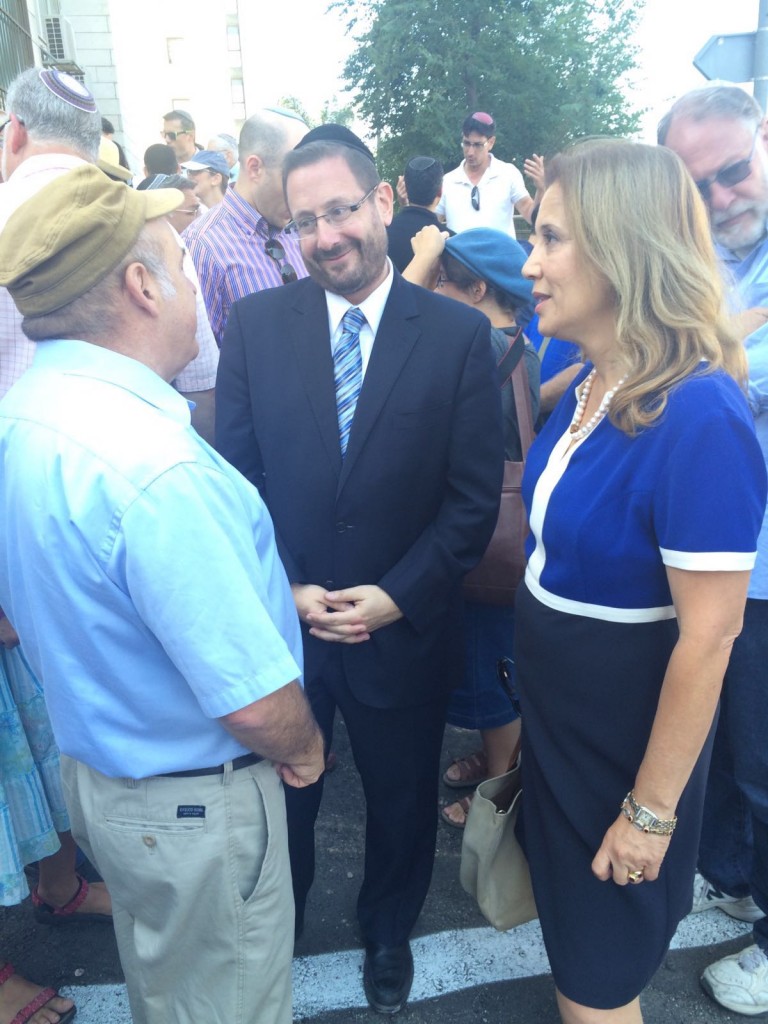 Natan Sharansky (R), Dov Lipman (C) and Aliza Lavie at the protest outside of the Chief Rabbinate, July 6,2016 (Courtesy)

In an email to the KJ and Ramaz communities, Lookstein’s supporters noted that “[t]his continuing trend has the dangerous potential to alienate even further large segments of diaspora Jewry and to create more divisiveness in the Jewish world.”

The fracture in the Israel-Diaspora bond is detrimental. The Jewish communities in Israel and abroad need each other today more than ever. Diaspora Jews constantly reach out to Israel in search of support and comfort amidst growing anti-Israel and anti-Semitic sentiment across the globe. At the same time, Israel continuously calls out to Jews around the world, looking for financial, political, and emotional support and assistance.

But how can Israel expect Diaspora Jewry stand with us, if we do not treat them with dignity?

Israel is meant to be a country for all Jews to feel welcome. Since the founding of the State of Israel, this country has successfully accepted Jews from all different backgrounds — Polish Jews, Spanish Jews, Yemenite Jews, and Ethiopian Jews — and made it a place where they could feel at home. Our history has proven that we know how to deal with differences in beliefs and practices. But the fact that one homogeneous group is in control of religious decisions makes this country a place where only one kind of Jew feels comfortable. This must change.

My primary goal as a member of Knesset is to make Israel a place that is home for the entire Jewish people. We are so focused on our external security issues that we sometimes forget about the internal security issues; this country is currently not a place where every Jew feels safe and at home. We have betrayed our own people.

Today is Rosh Chodesh Tammuz, the first day of the Hebrew month of Tammuz. On the 17th of Tammuz, we commemorate the siege of Jerusalem and begin a three-week period of mourning for the destruction of Jerusalem and the two holy Temples. According to tradition, the Second Temple was destroyed because of sinat chinam, baseless hatred among Jews. Maltreatment of fellow Jews and lack of respect and understanding led to the exile of the Jewish people. I believe that recent actions by the Rabbinate have been rooted in a similar baseless hatred. This is pulling our nation apart, and it is simply unacceptable.

I tend to believe that The Supreme Rabbinic Court will overturn its decision about Rabbi Lookstein’s converts. But that is not enough. This individual case brings a broader issue to the limelight, yet the greater problem will not be solved on a case-by-case basis.

Yesterday morning, I participated in a protest outside of the Chief Rabbinate with 150 fellow supporters of Rabbi Lookstein, and also supporters of the real jewish values. Together, we expressed our discontent with the judge’s decision and our hope that they will reconsider Nicole’s status as a Jew. Rabbi Shlomo Riskin addressed the crowd, saying, “you, Knesset Members, are responsible for changing this situation.”

I could not agree more. As a member of Knesset and a religious woman myself, I will not stop fighting until we create substantial change to the religious system in our country. I will work to end this baseless hatred and to instead create a nation full of ahavat chinam, based on love for one another, acceptance, inclusion, and respecting your neighbor as yourself. These are our roots, this is what we struggle for. 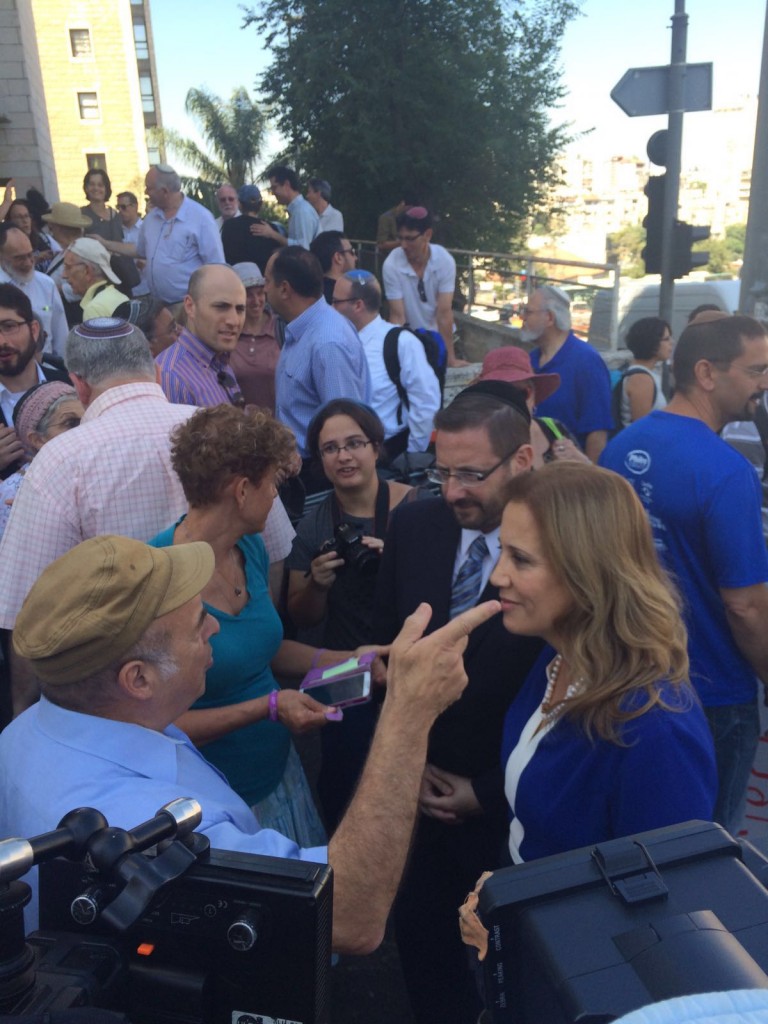 At the protest outside of the Chief Rabbinate, July 6,2016 (Courtesy)

Aliza Lavie is a member of the 20th Knesset as part of the Yesh Atid party. She is currently Chairwoman of the Knesset Subcommittee on Trafficking and Prostitution, as well as a member of the Foreign Affairs and National Security Committee and the Ethics Committee. 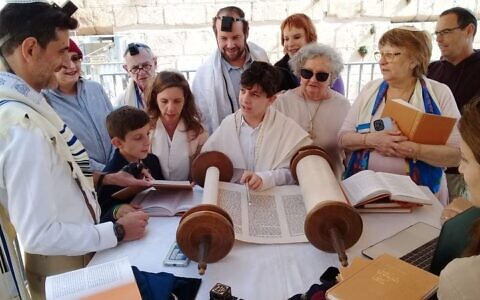