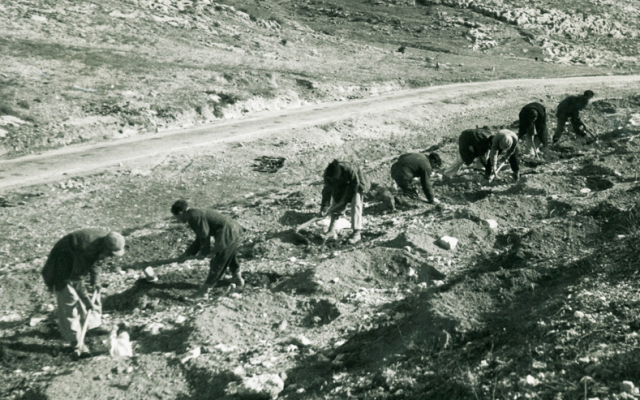 Niv Vizel has the hardest job in Israel; indeed, he may be our most unlikely environmental hero. As chairman of the Mateh Yehudah regional council, Vizel is responsible for some 500,000 dunams of open spaces in Israel’s heartland: from the woodlands and fields in the eastern coastal plains, up the wooded byways to Jerusalem and throughout the surrounding, historic Judean hills. As part of the Blue and White environmental, election campaign, I joined MK Miki Haimovich last week to visit Vizel and learn about what’s going on our environmental front lines. I came away alarmed.

Vizel finds himself almost entirely alone in his efforts to preserve the trees of our most venerated forests for future generations. As Israel seeks to build its way out of its present housing crisis, he must thwart more attacks on critical habitat that I can count or share in a holiday blog post. This Tu BiShvat, it is essential that we all stand alongside him and the defense he is waging on behalf of Israel’s endangered woodlands.

Mateh Yehudah is home to many of the country’s most iconic and fetching forests. It is hard to imagine that 70 years ago, the area was almost completely barren: an eroded, treeless terrain that begged for an ecological makeover. Soon after immigrants stepped off the first boats arriving in Israel during the early 1950s, they went to work — here — with shovels and hoes, bringing conifer saplings back to the degraded, ancient landscape. All told, some 300 million trees took root in our collective effort to replant the homeland. 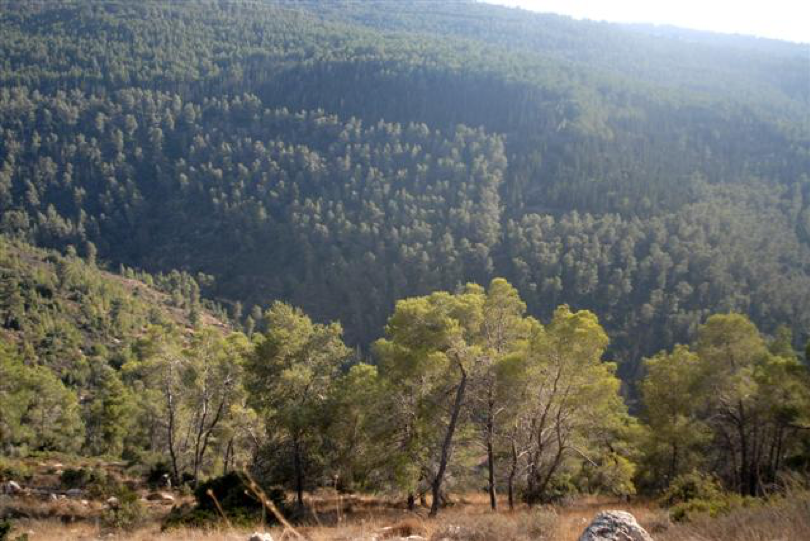 Today, many of those original “pioneer” pine forests are unrecognizable, having long since given way a much richer, more diverse indigenous assemblage of trees. It is miraculous to witness this natural succession process. Protected by even a modest canopy, dormant seedbanks return forgotten species into a renewed world.

Walking through these glorious hills, it is difficult to believe that these forests have hardly been around for half a century. It is not hard at all, however, to imagine a young King David with his flocks ambling alongside you; or Judith the heroine of old, taking cover in the very same ecosystem, on her way to that fateful mission to decapitate Nebuchadnezzar’s evil general; or old Rabbi Hillel’s students leaving the academy to take in some inspiration from a walk in the woods. They surely were surrounded by the same wildlife that today is reclaiming the rehabilitated habitat. They too were rewarded by the same breathtaking views, from the many peaks and summits of the Judean Hills. 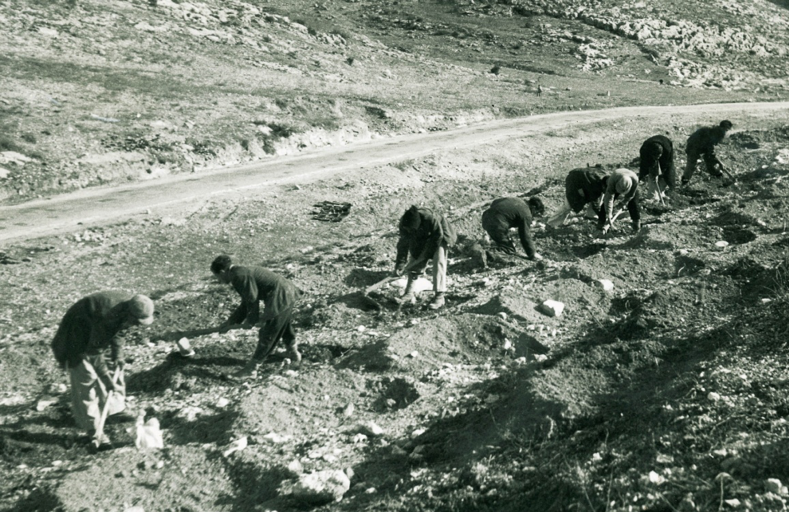 It is therefore profoundly disquieting to learn how many of these newly restored forest stands are literally about to disappear, devoured by massive construction and development plans. Reches Lavan — the lovely lookout bluff to the west of Jerusalem, was recently sacrificed and will soon be home to thousands of housing units. The peaceful parks south of Hadassah hospital will no longer be around to provide a refuge for residents seeking to briefly escape the bustle of the capital.

Qiryat Yearim, once a tiny cluster of houses with a yeshiva off Highway 1, is growing exponentially, and demanding to expand into the lovely vistas on the other side of its access road. But by far, the most devastating developments are the sprawling new neighborhoods, paving over lands that just yesterday contained some of our loveliest hiking trails — as Beit Shemesh races to become a city of 500,000 people — Israel’s fourth largest metropolis.

It is the same story with the expansion of Mevasseret Zion, Tzur Hadassah, Jerusalem. More people and more apartments mean less nature.

Vizel is doing everything he can to save these woodlands… and more. Following his father, he is a second-generation regional council chair. In that capacity, he represents 57 eclectic, rural communities. For him, it is highly personal. Although most of his supporters are recent arrivals to the Mateh Yehudah region, Vizel is trying to save the landscape and natural world that informed and enriched his childhood, growing up on Kibbutz Netiv HaLamed-heh. 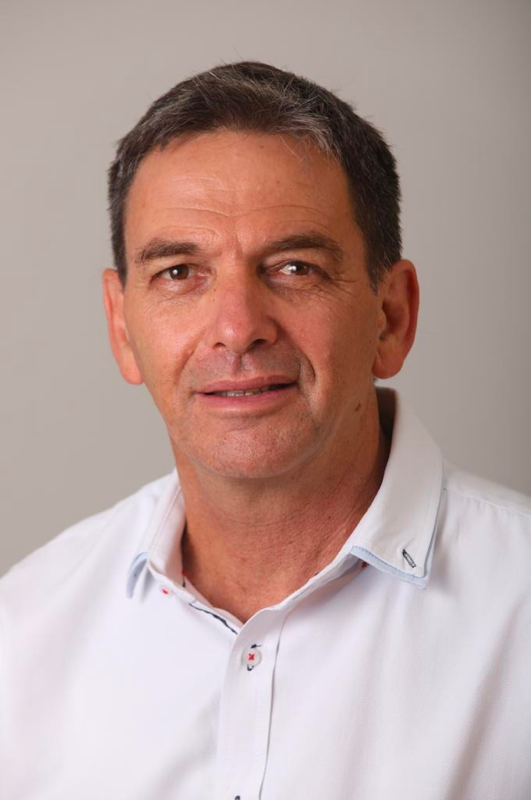 Vizel ran his election campaign on a vision of transforming the region into an Israeli Tuscany or Nappa Valley. Using the dozens of vineyards and wineries in the region, he established Israel’s first “wine trail” and wine festival. But the sprawl that present building plans threaten to impose would strangle those fledgling initiatives.

And so, Vizel runs from regional to local building committees, presenting his objections, trying to minimize the damage. He files legal petitions. He haggles with government officials. But there is a limit to what one person can do when the system is rigged against you.

That is because, politically, the situation is unfavorable: the Ministry of Interior now regularly convenes “border committees,” which are authorized to transform land jurisdiction from the rural regional councils to the hungry, urban planning committees of nearby cities. With many of the new neighborhoods designated for Israel’s ultra-Orthodox communities, Shas Minister of Interior Aryeh De’eri, naturally, is sympathetic. In the end, trees don’t vote. 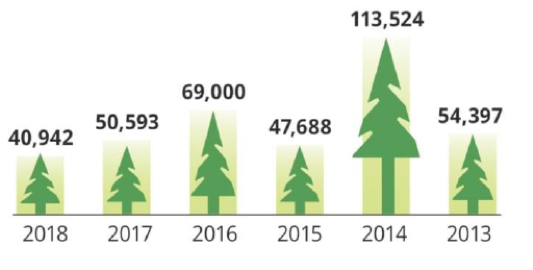 But it is trees that still mostly populate the Mateh Yehudah regional council – and Vizel does what he can for these silent constituents, who sadly, seem to have lost their historical advocates in Israel’s government ministries. Even the Ministry of Environment has essentially given up. Tu BiShvat this year should remind us that we cannot.

As Israeli cities become even more crowded and suffocating, it is in these ancient hills that we find the hiking trails, the archaeological parks, and the natural springs to lift our spirits. It is here that we can yet find a haven for a few moments of contemplative solitude under the shade of some gnarled oak, tall cypress, or red “katlav” (Arbutus).

Tu BiShvat is the birthday of the trees. Traditionally, we think about planting as an act of hope and solidarity with the profound mission of returning ecological health to the Land of Israel. But, perhaps more important today, we need to consolidate and conserve: millions of trees, so painstakingly and lovingly planted, are in very real danger of turning into apartment complexes, asphalt roads, and urban sterility.

We can do better. We can support Niv Vizel and his partners in civil society. We can vote for a different government that chooses a long-term vision and reinstates a planning process that takes trees and forests into consideration. And we can still go out to hike in Israel’s wonderful woodlands. This Tu BiShvat, we do well to remember that it is up to us, if we want our children to have a natural world in Israel worth celebrating.