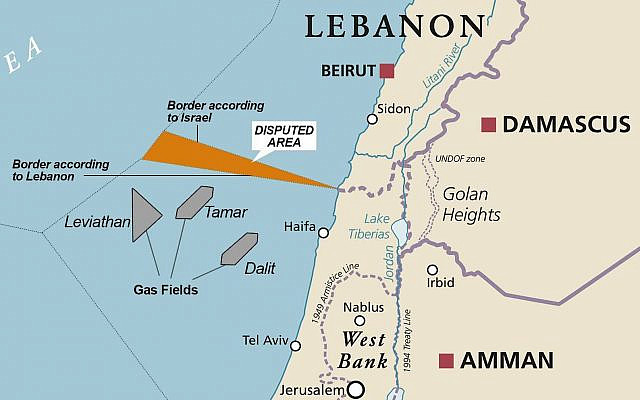 After Israel’s Prime Minister, Yair Lapid, gave away the farm, or more directly Israel’s maritime territory, to Hezbollah-controlled Lebanon, Israel is now on high alert after Lapid rejected a belated slap in Israel’s face by Lebanon who took everything that Israel gifted them and then moved the goalposts on the agreed Israeli security and compensation requirements.

Israel’s Defense Minister, Benny Ganz, who had also agreed the terms of a bad deal, put the Israeli Defense Forces on high alert.

One of the altered Lebanese clauses demands that Total Energy, the French energy conglomerate that hold the license both for Israel’s Karish rig and for Lebanon’s future drilling rig, will buy a portion of the reservoir in the waters that Israel was about to surrender to Lebanon. This is a Lebanese admission that the disputed waters are indeed, at least partly, Israeli sovereign maritime territory which Lapid and Ganz are about to gift to them in return for a low percentage of royalties if, or when, Lebanon is capable of drilling from a future rig.

Israel has informed the United States, acting as liaison negotiators in a deal that many Israel experts say clearly favors Lebanon, that Israel opposes the Lebanese changes in what is considered by many in Israel as an already bad deal.

There is a concern over the possibility that if the amount and quality of gas is not substantially profitable, and if no drilling takes place, it means that Israel will have gifted Lebanon its maritime territory for nothing!

And to think that, when the terms of this deal were being finalized, Ganz said that “this deal harm’s Iran’s interests.”

How wrong can he be?

This deal must be authorized by the Israeli Knesset. Hopefully saner voices will be heard.

Israeli law only required that international agreements be submitted to the Knesset for review, not a vote of approval. However, historically, agreements regarding territorial changes have been brought to the Knesset legislature for a vote.

With an upcoming election in November, Israel is sailing in stormy waters.

About the Author
Barry Shaw is the Senior Associate for Public Diplomacy at the Israel Institute for Strategic Studies. He is also the author of ‘Fighting Hamas, BDS and Anti-Semitism,' '1917. From Palestine to the Land of Israel, 'BDS for IDIOTS,' and his latest work 'A Tale of Love and Destiny,' the dramatic life of a Jewish heroine.
Related Topics
Related Posts