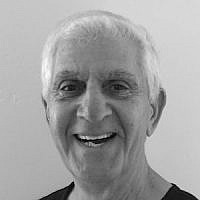 The Blogs
Avraham Shama
Apply for a Blog
Advertisement
Please note that the posts on The Blogs are contributed by third parties. The opinions, facts and any media content in them are presented solely by the authors, and neither The Times of Israel nor its partners assume any responsibility for them. Please contact us in case of abuse. In case of abuse,
Report this post.

My name is Avraham Shama. I wholeheartedly thank the Sons of Iraq Awakening movement and its leader, Mr. Wisam Al-Hardan, for their acknowledgment of Iraq’s shameful expulsion of its 120,000 Jews in the late 1940s through 1951. As one who suffered from that dislocation, I applaud the movement’s moral fortitude and call upon the state of Israel too to apologize for its part in the displacement and ensuing treatment of me and my fellow Iraqi Jews in Israel.

In a recent Wall Street Journal op-ed (September 24) Al-Hardan stated: “The most infamous in this tragedy was the mass exodus and dispossession of the majority of our Iraqi Jewish population, a community with 2,600 years of history” in Iraq.

In the late 1940s, the Jewish Agency and the forming state of Israel reached a deal with the Iraqi government. Under the agreement, Iraq gave its Jews one-way visas to Israel in exchange for all their assets, which made Iraq rich overnight. Israel received an infusion of 120,000, mostly young Jews and increased its population by 16%. Iraqi Jews, on the other hand, became penniless, helpless and totally dependent on the state of Israel.

But there was a big problem with this horse-trading scheme: most Iraqi Jews, including my parents and their nine children, did not want to leave. They had thriving businesses and were content living alongside their Muslim neighbors the way they have done for thousands of years. To spur those Jews Israel sent messengers to bomb their business and set their synagogues on fire, according to Esther Meir’s dissertation at Ben-Gurion University. These tactics were carefully planned to maximize fear and minimize damage to life and property. They convinced the reluctant, thinking the Muslims were behind these tactics, to leave to Israel.

The leaders of the new state of Israel were giddy about getting so many trusting, penniless refugees because they could use them to grow their poor economy, fortify their army and use them as first line of defense. Accordingly, they conscripted their young men into the army and sent most families to live in makeshift tents along the borders with hostile enemies. In exchange, those Jews were sent to populate barren borderland with no or few prospects for employment or proper educational and healthcare services. They were effectively segregated from the White European Jews (Ashkenazim) living more comfortably in the center of the country. I was one of few exceptions as my family moved from the makeshift transition camp in the middle of nowhere, Ma’abara, to a White neighborhood with good schools, running water and electricity.

The state of Israel systemically treated Jews from Iraq and their brethren Middle Eastern Jews with despicable attitudes and discriminatory policies, regarding them as raw material to be used for the benefit of the country. According to recently declassified memoranda written by Ben-Gurion himself and a biography by Tom Segev of him, Mr. David Ben-Gurion described Middle Eastern Jews as “animals” and “monkeys,” clay in the hands of their potters. Moshe Sharett, Israel’s second Prime Minister as well as its Foreign Minister and many other leaders of that time used similar terms, much like the terms the US government used to portray American Blacks in the past. In fact, as reported by Israeli Newspaper Haaretz, Prime Minister Sharett ordered that Kfar Saba transition camp in which I was living be dismantled in less than a day in February 1953, without consultation or explanation. Sadly, as even the Israeli army discriminated against Middle Eastern Jews. Haaretz reported on a research project by Zeev Harari according to which new recruits of Middle Eastern background were intentionally downgraded so they would serve in inferior posts as dishwashers, drivers and guards.

It is no surprise that many Iraqi Jews like me fled Israel to the US, preferring to be Jewish Americans than Iraqi Israelis.

It is time for the state of Israel to own up to its shameful treatment of Iraqi and other Middle Eastern Jews and apologize for its sins as Iraq Awakening movement has done.

About the Author
Avraham Shama is a Professor of International Business, the University of New Mexico. His Memoir Finding Home: An Immigrant Journey, is available on Amazon.
Related Topics
Related Posts
Comments