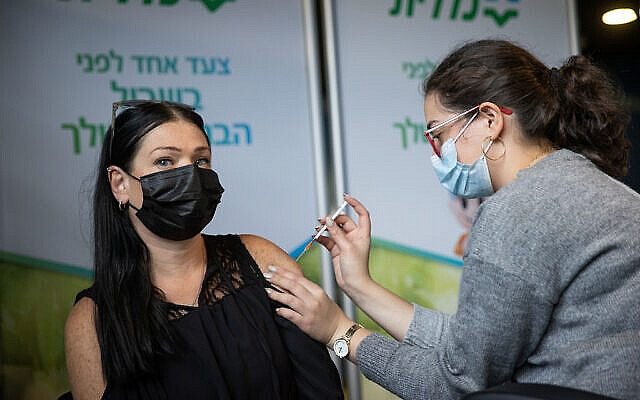 Israel’s world-beating Covid vaccination drive has taken its place alongside other jewels in the crown of national pride, from tech superstardom to cultural exports to the (now imperiled) cutting-edge culinary scene. But it is a shame that the success also underscores the immorality and short-sightedness of its approach toward the Palestinians.

According to official and credible statistics, Israel has administered at least the first vaccine to 28% of its population, ahead of UAE and Bahrain and far ahead of the UK and US, while most of Europe plods along at a third or quarter the rate. The Palestinians across the wadi are nowhere to be found.

Success has many fathers, and so it is with the Israeli vaccinations. Some credit the can-do culture which is good at smashing through barriers and worrying about details later. Compare that to the European regulatory delays and concerns about egalitarian distribution.

Others note Israel’s effective and highly digitized healthcare system created by governments past. It is a model of a state-regulated and public-funded system with private options that America, with its endless struggles on this issue, can learn from. That the 10 million-odd population is crammed into a condensed geographical area helps. And it also seems Israel agreed to share anonymized data with vaccine trailblazer Pfizer in a sort of live trial.

Israel also has no shortage of saps who lionize the prime minister. Napoleon complex notwithstanding, it’s reasonable to think that in his desperation, with elections looming and a bribery trial underway, Benjamin Netanyahu tried his talented best to ensure this worked quite well.

But Netanyahu has no voters in the West Bank or Gaza (other than Jewish settlers in the former) and Israel’s clinics don’t operate in the Palestinian areas either.  So as a result, even as he made sure to be photographed with Israeli Arab citizens receiving vaccinations, he has not lifted a finger to help the Palestinians.

Like most wrong things Israel does, this policy is not totally indefensible. Israelis still view the Palestinians as enemies to a considerable degree, and in the case of Gaza, there is no question that the Hamas authorities there are actually as such. And Israelis also widely believe the country washed its hands of the Palestinians by agreeing to set up the Palestinian Authority in the 1990s and pulling troops and settlers out of Gaza in 2005. Countries don’t generally owe their neighbors vaccines.

The problem with this view is that it is simply wrong, especially in the West Bank.

The Palestinian Authority rules over non-contiguous islands of territory and Israel controls the passage between them and building rights and the natural resources in the areas between them. Nothing gets in or out – including goods and people — without Israel’s approval. The Palestinian autonomy zones are akin to apartments in a building where Israel controls the stairways, the entrance, the roof and the yard.

The security barrier creates a sense of a border between two entities, which confuses Israelis but not Palestinians: they are mostly barred mostly from crossing into Israel (except via a nightmarish and widely abused permit system) whereas the settlers and other Israelis come and go as they please.

Moreover, whereas everyone pretends Mahmoud Abbas is a “president” most of his authority is closer to the municipal level. There is a Palestinian parliament passing Palestinian laws and there are Palestinian courts – but when Israel wants to arrest someone in the heart of the autonomy zones its security services march in. So the government that has true power over the Palestinians is Israel’s – a government the Palestinians have had no say over since the occupation began in 1967, which undemocratic situation does not appear about to change.

The map also does not support the notion of true separation. The West Bank is dotted with Jewish settlements, now home to almost a half-million people many of whom live within line of sight and throw of stone from Arab towns. The settlers receive vaccines; their neighbors in the “other country” do not.

Netanyahu is fond of projecting Americanness with quips like “if something quacks like a duck, it is a duck.”  This whole situation, then, quacks like a scam.

So it is no surprise that Israel faces calls to do something about vaccines for the Palestinians.

What exactly is an open question. The situation is complicated buy the poor healthcare system in the territories, especially in Gaza — and dealing with Hamas on this would not be easy. Does Israel really owe all the Palestinians full subsidy, exactly as it has done for people in Israel? Possibly not. Should it argue a little on their behalf perhaps? Give them some doses which it might get as part of only somewhat larger deals with Pfizer or Moderna? Pay for at least a small part? Try to help even a little with logistics? Something?? Anything???

The PA itself said Israel has a “duty” to vaccinate Palestinians, in a statement two weeks ago. It accused Israel of “racial discrimination against the Palestinian people and a denial of their right to healthcare.” Human Rights Watch called on Israel to vaccinate the Palestinians, UN independent experts have called it “morally and legally unacceptable” to not do so, and the UN’s body for human rights also issues a statement saying Israel had a responsibility under the Geneva Conventions.

I’m actually not saying Israel has a legal obligation (beyond not getting in the way); the situation is more ambiguous and elusive than that. I am saying total indifference is not right, not smart and not a good look.

Ironically, it is those Israelis who fought hardest to prevent the PA from being established that now argue loudest its existence frees Israel of any responsibility under the Geneva Conventions. It was the Israeli right, under the selfsame Netanyahu, who kicked up an Iran nuclear deal-level fuss over the talks that established the PA, tearing Israeli society to pieces and ending in the assassination of Yitzhak Rabin They wanted to maintain the direct military occupation and argued not to “given them guns” — the same guns they now want to be used in “security collaboration.”

I found myself, as chairman of the Foreign Press Association, confronted with a nationalist Government Press Office that 19 years ago withdrew official Israeli press accreditation from Palestinians working for the foreign media.  “You people think Judea and Samaria should not be part of Israel,” said GPO director Daniel Seaman to foreign media chiefs weighing how to handle his assumption. “Then why should we give them accreditation?”

Not long after that Palestinian journalists were facing arrest by the Israeli military for not being able to present accreditation.

Israel tries to play it both ways when it comes to the Palestinians. But there is a global pandemic going on when all of us are judged by our humanity. Humanity is not a compelling argument with hypocrites, so I’ll try just one more.

Israel’s cup of generosity flows over when it comes to distant tribes. When calamity strikes them it wastes no time dispatching field hospitals across the globe, from Haiti to Liberia. Less so with the Palestinians – yet that is where it needs a gamechanger most. Imagine the jolt of good karma, consider the surprise, and calculate the public opinion boost of not being petty with them for once.  Think of it as a sort of live trial. 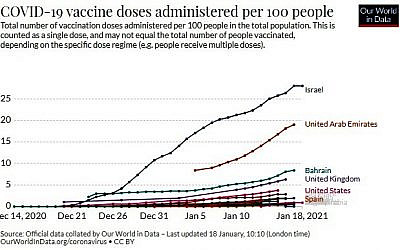 Source: Our World In Data
About the Author
Dan Perry is the former Cairo-based Middle East editor and London-based Europe/Africa editor of the Associated Press, and served as the chairman of the Foreign Press Association in Jerusalem. A technologist by education, he is the Chief Business Development Officer of the innovative ad tech company Engageya, and Managing Partner of the award-winning communications firm Thunder11. Follow him at twitter.com/perry_dan www.linkedin.com/in/danperry1 www.instagram.com/danperry63 https://www.facebook.com/DanPerryWriter/ https://muckrack.com/dan-perry-22
Related Topics
Related Posts
Comments