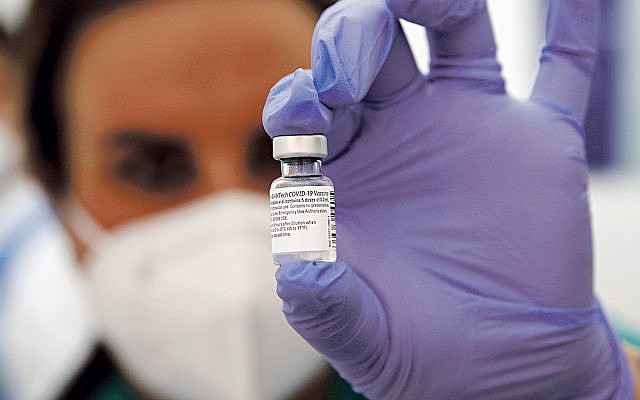 A nurse holds a phial containing the Pfizer-BioNTech Covid-19

But along with the domestic discussion, there is, naturally, an international element. And, equally naturally, Israel is in the frame.

The problem — as usual — is the Palestinians, and the mixed messages coming out of both Ramallah and Jerusalem, aided by a lavish side-helping of stirring the pot from a variety of town criers, including Amnesty International and some ill-informed media conclusion-leapers.

First, it was reported that Israel was vaccinating settlers in the West Bank while not making vaccine available for Palestinians. Untrue. Israel is indeed vaccinating its own population in huge numbers. These include Palestinian Arab citizens of Israel and Palestinian residents of Jerusalem.

It remains open to debate as to whether Israel has a legal responsibility to vaccinate Palestinians in the West Bank and Gaza, too, though some may think it has a moral responsibility. And perhaps a public health responsibility, too, for who would want a virus running unchecked over porous borders?

In any case, the Palestinian Health Ministry, apparently sulking, said it hadn’t asked Israel for vaccines. It was getting its own supplies, it said, from Russia and the World Health Organisation — although they may not actually arrive until March.

Even more sulking took place when the UAE offered to provide vaccines, because the Palestinians were annoyed with the UAE for having done a peace deal with Israel. (Honestly, if we thought Donald Trump was behaving like a splenetic toddler, he had nothing on the Palestinians).

In Gaza, meanwhile — which, because of the much-attacked blockades by both Israel and Egypt, has gone relatively Covid-free — the sulking grew to a grand scale.

An American Christian group, which worked with Israel to establish a field hospital on the Syrian border, when Israel was providing medical care for Syrian civilians, went ahead and built a similar facility on the Israel-Gaza border.

The group, FriendShips, had secured the agreement of both Israel and Hamas, and was ready to welcome patients this week, relieving the pressure on Gazan hospitals. But now Hamas has announced that it won’t send patients to the FriendShip clinic — because, it says, it’s not providing enough services. Oy.

Back in Israel, and the vaccine lunacy is reaching new depths as Israel admitted (as did, eventually, the Palestinians) that it had, in fact, given some vaccines to Palestinian health workers. Not many — 100 so far — and since the majority of Israel’s vaccines have come from Pfizer, which the PA has acknowledged it would have trouble storing in the requisite sub-zero conditions, it may be difficult to give more.

The admission only emerged after a court action taken by the family of the kidnapped Israel soldier Hadar Goldin. Goldin’s body is being held in Gaza by Hamas and his family wanted no aid into Gaza — including vaccines — without the return of his remains.

Last Thursday, meanwhile, Yuli Edelstein, the health minister, announced that Israel would begin vaccinating Palestinian prisoners, despite a previous order from the public security minister, Amir Ohana, that convicted terrorists should not receive the vaccine.

It took an intervention by President Rivlin, who said not vaccinating prisoners was “inconsistent with our values, the values of the Jewish and democratic state”, before Edelstein rescinded Ohana’s ruling.

Israel, understandably, wants to immunise as many of its citizens as it can — and has paid a premium price for doing so. Its roll-out programme has won it world-wide admirers, including from the UK.

Its best course of action, it seems to me, would be to make a public declaration of intent to help the Palestinians when it can — and then sit back and watch the sulking escalate. Win-win.