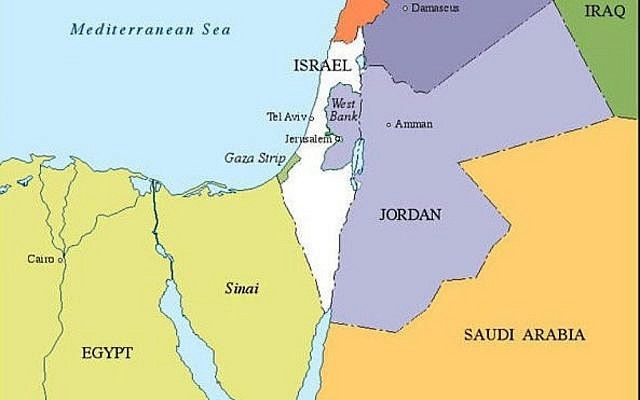 When a nation is surrounded by weaponized nations, she has to equip herself.
A. P. J. Abdul Kalam Indian Statesman

Israel is surrounded. Of the five land borders, only two are internationally recognised, those with Egypt and Jordan. The other three borders are designated as “disputed”. Let us take a closer look.

To the North there is Hezbollah. This terrorist organisation was founded in the early 1980s and acts as a proxy for Iran. The Iranians provide funds to enable Hezbollah to harass Israel.

A growing number of countries, including the United States of America, United Kingdom, Germany, the Arab League, and Israel have recognised Hezbollah as a terrorist organisation.

As only to be expected, the vacillating European Union has only designated Hezbollah’s military wing as a terrorist organisation. This decision was forced on them after an attack on a tourist bus in Bulgaria in 2012. In fact, Hezbollah’s military and political factions work together with many officials taking on roles in both the military and political wings; the distinction is purely nominal.

As a reminder, Hezbollah’s declared purpose is the destruction of the State if Israel.

To the East there is Jordan. Although ostensibly at peace, relations between Israel and Jordan are at their lowest point since the peace treaty was signed back in 1994.

To the South there is Egypt. Here, the border has now been formally recognised as part of the peace treaty between the two countries. With the occasional hiccup this cold peace seems to be lasting. However, some eight years ago the Egyptian army entered the de-militarised border zone without Israeli approval, in violation of the peace treaty. There have also been reports that Egypt has deployed anti-air missiles on the border. This would clearly be aimed at Israel; the Bedouin tribes in the Sinai have no aircraft.

To the South-West there is Gaza. Under the control of Hamas, there are no friends of Israel here. Hamas, an Arabic acronym for the Islamic Resistance Movement started life in 1987. Its charter commits this terrorist group to the destruction of the State of Israel. Amongst those to designate Hamas a terrorist group are Israel, the US, EU, and UK.

By now it should be clear to the reader that Israel face threats on many fronts. Although there is no physical border, we are threatened by one of our most implacable enemies, the Islamic Republic of Iran. The Iranian military is equipped with relatively modern US-made equipment. Delivered before the 1979 Iranian Revolution, this has led to the description of their armed forces as the most powerful military force in the Middle East. After a terrible eight years of war with Iraq, they are now highly experienced and battle-hardened.

Iran may well have nuclear weapons. It is just possible that Israel also has the odd atomic bomb or two, some suggest that 400 warheads is a good guess. There have even been suggestions that her armoury includes hydrogen bombs.

Which brings me, at last, to the point of this blog. It is possible that, chas v’chalila (heaven forbid) one day our leaders may have to decide whether to launch a nuclear counterattack against Iran. This could bring in the US and the Soviets, to say nothing of the Chinese. We could be looking at the end of the world.

And these very same leaders can’t even decide how to tackle the coronavirus emergency. They cannot agree over something as simple as closing health clubs and swimming pools for a few weeks. You can open and close a restaurant many times a day but once you have dropped a nuclear weapon you can’t call it back.

I wish all my readers a pleasant and virus-free day ….