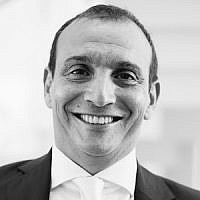 The Blogs
Stefan Kerner
Apply for a Blog
Advertisement
Please note that the posts on The Blogs are contributed by third parties. The opinions, facts and any media content in them are presented solely by the authors, and neither The Times of Israel nor its partners assume any responsibility for them. Please contact us in case of abuse. In case of abuse,
Report this post.

I am not ashamed to admit that within moments of hearing the news of the tragedy that hit Nepal, my thoughts turned to thinking how long it would be before Israel would send her search and rescue teams to the region, as well as its renowned field medical hospitals. So often, this tiny country takes the lead to help those stricken by natural disasters without thought of personal safety, budgets or even political gain.

Although I share the grief and sorrow at the loss of so many innocent lives, it was also a source of great pride that it was Israel who sent the most help to Nepal. Not on a per capita basis, not in comparison to the size of its GDP, but the most help in terms of soldiers, aid works, doctors, nurses, engineers…people. ‘Tikkun Olam’ in action. My respect and admiration goes out to everyone involved in the mission in Nepal, they are the best of the best. Their efforts bring pride and honour to Israel.

And yet, at the same time, Israel also suffers from some of the less admirable traits of human character. While visiting the caves at Rosh Hanikra last week, I was appalled to see such natural beauty spoiled by Sharon and David who had visited shortly before me. I have no idea who they are, but did they really need to mark their visit in permanent ink on the walls of the cave? I suspect it may have been someone else who had decided that it was perfectly acceptable to discard their empty cola bottles in the water pools we were so in awe of.

Fast forward a few days and to a beautiful Shabbat afternoon walk along the beach with my wife. The weather is perfect, families are picnicking, friends are laughing together, and two grown men are urinating openly on the sand. On what planet is this behaviour acceptable? With a public toilet not much more than a hundred metres away and even bushes and trees a few seconds walk from where these vulgar men were standing, they showed not one iota of embarrassment at their activity.

In the same week that I shared in the pride of Israel sending its best of the best, I can’t help but think of some of the worst of the worst. This is the contrast that Israel faces on a daily basis. Whilst there are certainly far worse things that happen in this country than the two relatively minor acts of inconsideration, it goes to show the lack of respect that people can have for others around them, their country and even, surely, for themselves.

As I sit here writing my personal vent, I am unsure as to whether I am over reacting. In a week where pride and tragedy in Nepal have gone hand in hand, is it really so important that a minority of people do not show the common respect and decency that the majority do?

The answer is a resounding ‘Yes’. If we accept this kind of behaviour, then it chips away at the very core of our social values that define us as a country and a nation. The core value where we feel the duty to save help save lives of strangers for no reward. Where we take pride in our vibrant democracy but show our shock when that self-expression turns violent. If we accept unsocial behaviour at a base level, then it may not be too long before we learn to accept bad behaviour at the next level and so on. It could be a short journey before reach a stage where we no longer feel the need to send our finest to rescue those in need, where we don’t concern ourselves with the well being of others and where self interest is the only measure that counts. No thank you, I will not accept that and will continue to vent against the minor acts of shame as well as much as sharing the the major acts of pride.