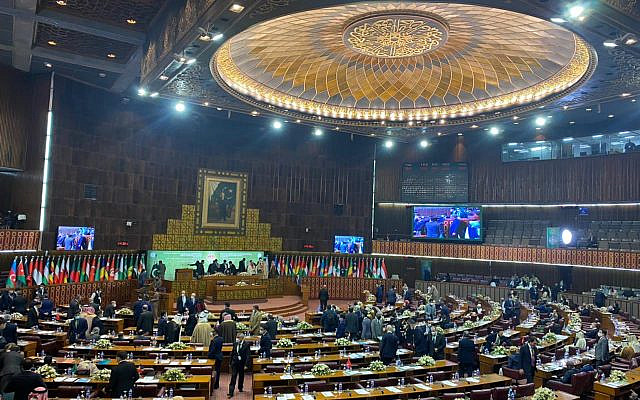 The headline is a hope for the future, when Israel will actually be invited for an Organisation of Islamic Countries meeting. However Israel was brought up for discussion, as usual, at the 17th extraordinary meeting of the Foreign Minister of the Organisation of Islamic Countries (OIC), convened by Pakistani Prime Minister Imran Khan in Islamabad to discuss Afghanistan and the looming humanitarian crisis.

While there is no obvious connection between the crisis in Afghanistan and Israel, for obvious reasons Israel seemed to be the only important and clear part of the so called “Islamabad declaration” that was adopted by the OIC summit.

Prime Minister Imran Khan convened the extraordinary meeting citing the deterioration of the economic and humanitarian situation in Afghanistan. After the Taliban takeover of Kabul, Pakistan has tried its very best to convince the international community to engage and fund the Taliban government, which it terms as inclusive and representative of the Afghan people. After repeated failures in all fora, it finally turned to the OIC, which it hoped will support its stance on funding the Taliban.

Meanwhile India hosted the 3rd meeting of the India-Central Asian dialogue on the same day as the extraordinary OIC Foreign ministers meeting and had the foreign ministers of Uzbekistan, Tajikistan, Kazakhstan, Turkmenistan and the Kyrgyz Republic all in attendance in New Delhi, giving the OIC meeting a skip.

Speaking at the conference, rather than focus on the agenda and crisis at hand, Imran Khan chose to invoke Palestine and Kashmir-bringing both to the same plane. He called upon the OIC member states to make a unified plan to help the oppressed people of Palestine and “Indian Illegally Occupied Jammu and Kashmir”. The PM expressed his concerns over grave human rights situation in the Indian Illegally Occupied Jammu and Kashmir (IIOJK).  As reported by the News International, while appreciating the OIC’s steadfast support for Kashmiris, he requested the OIC Secretary General for continued advocacy for the resolution of the Jammu and Kashmir dispute in accordance with the UN Security Council resolutions. He was curiously silent on the oppression of the Uighur Muslims in neighboring Xingxiang. 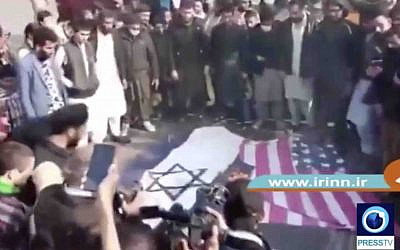 Coincidentally, thousands rallied in Pakistan’s largest city Lahore in an anti-Israel, pro-Iran rally led by prominent Pakistani Shia cleric Allamah Syed Jawad Naqvi. The rally was held on Shahrah-e-Quaid-e-Azam, one of the busiest streets in Lahore, and was attended by thousands of people, both Shias and Sunnis chanting anti-Israel and pro-Iran slogans.

In his remarks at the rally, Naqvi said “threat to Iran is a threat to all Muslim countries,” reaffirming the support of the people of Pakistan to the government and people of Iran. 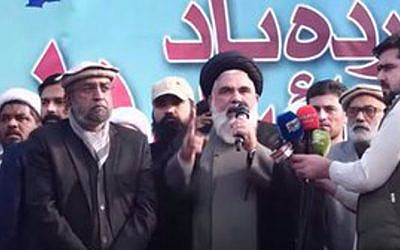 The rally seemed like it was a show of good faith to the attending Iranian foreign minister Hossein Amirabdollahian who met with Prime Minister Imran Khan and chief of army staff Gen. Qamar Javed Bajwa. Naqvi particularly stressed on closer relations between the two Muslim countries of Iran and Pakistan to ward off the threat posed against the world of Islam by the Israeli regime and its backers.

The increasing closeness between Iran and Pakistan also comes on the eve of Pakistan’s need to rally Afghanistan’s neighbors to its side. In the past Iran has been very wary of the Sunni Taliban and has shared a common platform with India and Russia which has often been against Pakistan’s interests. By criticizing Muslim countries who develop relations with Israel (UAE and Bahrain without mentioning them) and equating Palestine and Kashmir, Khan hopes to win admirers and supported at the OIC as well as make common cause with the Iranians, hoping to create a bond against the Israel-India alliance. It is important to remember that Iran’s nuclear program was kickstarted by Pakistani nuclear scientist (and the father of Pakistan’s nuclear program) A.Q.Khan.

Pakistan has also started experimenting with so called tribunal’s rallying the extreme left in Europe and the Americas. Kashmir Civitas, a Canadian NGO funded apparently by Pakistani security services, organized a Russell tribunal on Kashmir in coordination with the OIC meet in Islamabad. The so called tribunal was organized in Sarajevo, which is now leaning towards Islamist forces with the support of Al Jazeera balkans, International university of Sarajevo, the Permanent People’s tribunal of Bologna and several Turkish funded organizations. In Italy meanwhile, the former speaker of the Italian Parliament, Laura Boldrini, has created waves inviting the director of PLFP linked Al-Haq to speak at the Commission for foreign affairs of the Italian Parliament. These attempts seem to be experiments to start legitimizing ridiculous claims with the use of instruments that are legitimate and valid (such as the Uighur Tribunals against china). How much of this is coincidence and how much is a dedicated strategy by the new upcoming Pakistan-China-Qatar-Turkey-Iran alliance will only be seen in the coming months. It wouldn’t be surprising if this were followed by a “tribunal on Palestine”.

The “Islamabad declaration” was very short on specifics when it came to aid for Afghanistan. What is clear is that the Islamic development bank (based in Jeddah) will open a trust fund by Q1/2022 to channel development funds from OIC countries for humanitarian aid to Kabul. No commitments were made or any specifics declared. The OIC did not provide formal recognition to the attending Taliban minister Amir Khan Muttaqi was excluded from the formal photo. It also urged Afghanistan’s rulers to abide by “obligations under international human rights covenants, especially with regards to the rights of women, children, youth, elderly and people with special needs”.

The Islamabad Declaration was very specific however condemning the illegal colonial measures practiced by Israel in the occupied Palestinian territories, declaring that “the Israeli measures are illegal and void and that the OIC does not recognize any changes affecting the pre-1967 parallel, especially in Al-Quds”.

The meeting called on the international community, including the UN Security Council, to hold the Israeli occupation accountable for its violations, and to take all necessary measures, including imposing sanctions on Israel to stop these violations.

The final statement also condemned “the repeated attacks by the Israeli authorities on the Al-Aqsa Mosque and the continuous attempts to change the historical and legal status quo under false religious pretexts”.

One could definitely say, at least in thought and action of the host, Prime Minister Khan, Israel was definitely present at this OIC meeting.