It is fitting that after a month of total lockdown when almost everyone in Israel seems to be adrift, that the focus has been on submarines. It is more than ironic, nay tragically poetic, that alongside heartbreaking scenes of a business owner who has gone bankrupt, burning his merchandise in the street in despair after drowning in debt, we watch footage of a convoy of hundreds of vehicles with mock submarines traveling to Balfour to protest the closure of the investigation into Netanyahu’s share profits in the submarine scandal. The two Israels, juxtaposed. 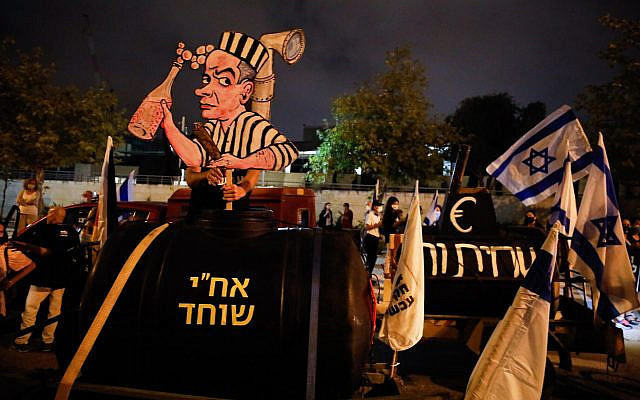 Mandelblitt’s decision to close the case against Netanyahu for reasons of lack of evidence is eyebrow-raising, to say the least. In his statement, he conceded that there is strong evidence that Netanyahu received inappropriate benefits from the sale of stock he owned in his cousin’s company, but there was no evidence to be found of the quo to the quid. He added that “too much time had passed” and that the statute of limitations for the offenses had expired. I find all these assertions hard to accept.

The statute of limitations for fraud and breach of trust in Israel is ten years.
The submarine scandal broke in November 2016. On 23/11/2016 Haaretz reported that Mandelblit ordered the police to open an inquiry into the affair. That was four years before the statute of limitations expires, and only six years since the sale of the shares. What were they doing for the last four years?  Are we really being asked to believe that an elite unit like Lahav 433 which specializes in fraud and white-collar crime cannot track accounting evidence back six years? Have they been intentionally running down the clock? It certainly seems so.

This is what we know:

We know that in 2007, Netanyahu purchased stock in his cousin’s company, SeaDrift Coke Company, at a significant discount for $400,000.

We know that SeaDrift Coke Company supplies shipping manufacturers with needle coke which is used in submarines and that ThyssenKrupp is one of its major customers.

We know that in 2010, Netanyahu sold his shares for $4.3 million at a huge profit.  We also know that at the same time that Milikovsky repurchased Netanyahu’s stake in the company, $175,000 was deducted from the money he paid and that this was to repay a loan Milikovsky gave him in 2009 (Haaretz article from 20/3/2019).
– Do people really think that there is no connection between Netanyahu investing in his cousin’s company when it needed capital in 2007 and the loan Milikovsky gave him just two years after? Is this not circumstantial evidence of a “quo” to the “quid” at the very least? Surely it warrants deeper investigation?

We know that in the same year, when Netanyahu was already Prime Minister, Milikovsky gave a “loan” of $200,000 to Noa Roth Netanyahu’s daughter from his previous marriage, to help her purchase an apartment in Jerusalem. (Arutz 7, 17/10/2020). This was not reported to the comptroller, as required by law. We don’t know if the loan was repaid.

We know that in 2013, Netanyahu gave consent to Germany to sell state-of-the-art submarines manufactured by Thyssenkrupp to Egypt, without consulting with his Defense Minister or his Chief of Staff, and intentionally keeping them in the dark. This sale would indirectly profit Milikovsky’s company.

We know that in 2011, Israel ordered a sixth Dolphin-class submarine. We also know that the Director-General of the Defense ministry at the time of the purchase has submitted an affidavit stating that Netanyahu ordered him to cancel an international tender for the purchase of vessels for the Navy, thereby gifting the contract to Thyssenkrupp. And that Netanyahu’s personal lawyer and cousin David Shimron who brokered the deal with Thyssenkrupp and stood to earn a great deal in brokerage fees if the contract purchase was approved, had also been seeking to stop the tender at the premier’s behest. This, in defiance of every principle of good governance and public integrity.

– If the order for the submarine was placed in 2011, then the cancellation of the tender must have occurred before that. This creates a compelling causal connection on the timeline between the purchase of the submarine and  Netanyahu’s “windfall”. Why was this not followed up?

Two of Netanyahu’s close relatives with whom he has legal and financial relationships stood to profit greatly from the submarine deal. The law is very clear about the use of public office for personal gain:  “A public employee shall not use his public office for his own private gain, for the endorsement of any product, service or enterprise, or for the private gain of friends, relatives, or persons with whom the employee is affiliated in a nongovernmental capacity”. For clarification, a Prime Minister instructing the Defense Procurements Committee to cancel a tender is using public office. That it would result in personal gain for his relatives seems pretty clear to me.

Haaretz wrote on 20/3/2019, “Milikowsky has for decades given Netanyahu large amounts of cash, in addition to six-figure contributions to the prime minister’s legal defense fund and loans amounting to hundreds of thousands of dollars”. In light of all that has been revealed here, one would have to be either inordinately naïve or willfully blind to think that Milikovsky’s generosity is familial altruism to the tune of millions and not part of a reciprocal relationship. It beggars disbelief. And remember that Netanyahu’s net worth is about 50 million shekels.

Are these not grounds for further investigation? Astonishingly, Mandelblit thinks not.

Throughout his tenure, when he became Attorney General, Mandelblit’s performance with regard to the Netanyahu’s has been mercurial. Sometimes uncompromisingly principled, while at other times incomprehensibly lenient.

However, what strikes me is that this case, which promises to be the most serious case of governmental corruption in the country’s history, Mandelblit determined early on and even before he knew the full extent of the corruption that Netanyahu was not a suspect. How could he not be a suspect if it was upon his instruction that the tender was canceled and the contract was awarded to ThyssenKrupp? And that is without talking about the glaring conflict of interest, that he was deeply involved in the country’s decision to purchase $490 million worth of military equipment and two of his cousins with whom he has legal and financial dealings – one to whom he owed a substantial amount of money – stood to make a fortune from the deal, and which he failed to declare.

****************
This imagery of the submarine stays with me. It describes perfectly our present predicament. We, the people are drowning at sea, clinging to debris to stay afloat, and the government is in their submarine, out of touch and impervious to the extent of distress and devastation we are experiencing during this pandemic. People who have dedicated their lives to building their businesses are being crushed by the oppressive atmospheric pressure of debts and expenses, so deep underwater that they are drowning and their screams are muffled by water filling their lungs. Meanwhile, in their cozy but cramped surroundings (after all, there are 36 ministers to seat around the cabinet table) – just like in a submarine – they are not buffeted by the tides and currents of this crisis – as so eloquently demonstrated by Gila Gamliel and her 150 km jaunt to Tiberias during the lockdown. They fail to feel the frustration taking hold of us.

We worry about how to pay the mortgage and electricity. We worry about when our children can go back to school and how the lockdown and the intermittent school attendance will impact on their bagrut and their future, while inside the submarine Knesset members bicker over whether a budget should be passed for the eight days left in the year, or whether we should hold new elections at a cost of 2 billion shekels, while the national debt already stands at close to 80 billion. And who do you think will have to cover that? Occasionally Netanyahu raises the periscope to take a peek and gauge the atmosphere from afar, but all he sees are thousands demonstrating, which he doesn’t like.  So he lowers it again and devotes his time and energy to thinking about how to end them. The economic crisis be damned. 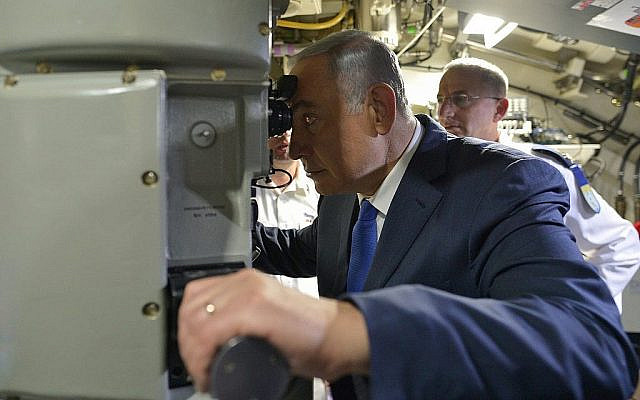 After a month of the country being under virtual house arrest, as expected, the Coronavirus infections have dropped. And just like a fly in a glass jar can no longer spread disease but eventually suffocates from lack of air, so are we. But Netanyahu, whose incompetent mismanagement precipitated the necessity for this lockdown boasts it is a resounding success congratulating himself while ignoring the surrounding chaos for which he too is responsible.

That reminds me of a marathon runner declaring himself the winner after ten kilometers.