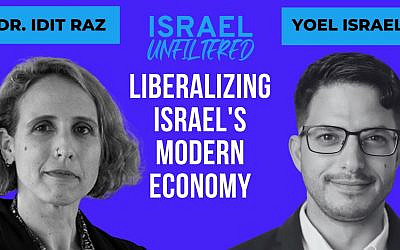 In this episode of Israel Unfiltered, I sat down with Dr. Idit Raz Kalisher, a policy researcher in the Aaron Institute for Economic Policy with a background in price theory and econometrics. She focuses on the issue of education within the Arab population in Israel. As well, Kalisher is the author of the children’s book Bayaar (In the Forest), which is a collection of stories explaining fundamental economic principles to children.

Kalisher is committed to developing ways to bring a knowledge of economics to the world’s youth, which helps enable responsibility and competence at a young age — a concept that I think is very important, as it can help them develop critical traits like personal responsibility early in their lives.

During our conversation I asked Kalisher about her views on childhood economics education, her re-involvement in politics as part of the Financial Freedom party, her views on how personal responsibility is taught, and her thoughts on education and employment in the Arab sector.

Kalisher explained the focus of the Financial Freedom party’s platform, which centers around the one thing that everyone in Israel — regardless of their position in the political landscape — agrees on: reducing the staggeringly high cost of living.

“What we want to do is strictly economic,” she said. “We only speak about economics and ideals of the free market and free economics and the liberty of rights. We deal with housing, with transportation, education, legalization, bureaucracy and regulation. Basically, what we want to do is lead Israel to economic freedom — everything here would have less government intervention, and we believe it would be for the best.”

Those free market ideals and the benefits of a free economy are ideas that Kalisher believes should be taught at an early age — hence the creation of her book mentioned above. I asked her what she thinks is the best approach to instill those ideals in our children at an early age.

“It’s something that primarily needs to come from home,” she told me. “But if you also think about the education system, I think that even kindergarten or first grade [is a good time to start]. That doesn’t have to be teaching [hard] economics — because economics, if you go to the basics of it, it’s actually the foundation of decision making. So when you teach children those principles, and you help them build the “decision making muscle,” then when you start talking about trade and resource allocation and all of that, it’s easier to understand.”

Kalisher also explained the impact of the gap between Jewish and Arab teens when it comes to their prospects once they graduate high school, which leads to lower academic participation, which in turn leads to lower participation in higher-paying occupations.

Furthermore, she noted that high school preparatory and pre-army programs give Jewish kids much more direction and guidance toward their ideal future positions — something that the Arab education system lacks. “Jewish teenagers get some kind of assessment, ‘you’re good at this, you’re good at that. Maybe you could get to this or that in the army.’ Arab teenagers, they don’t have that. No one tells them, they have no guidance, no information, no access to understanding the labor market,” she said.

As such, she aims to recommend policy changes that can give the Arab population more opportunities, more information and more prospects.

About the Author
Yoel Israel is a digital marketing and real estate investor, with a passion for liberal Zionism. Yoel provides an out-of-box perspective and unique interviews about Israelis in the culture. Yoel lives with his wife and daughters in Pardes Chana. He is the founder of WadiDigital.com, Cyfluencer.com, and IsraelUnfiltered.
Related Topics
Related Posts