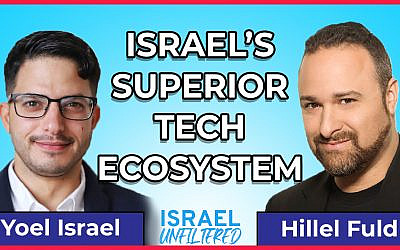 Hillel Fuld is the kind of guy who’s ahead of the curve. I first met the American Israeli business advisor in 2009. We sat down for a discussion about business marketing, and by the end of that conversation, he had convinced me to join Twitter. That would be my first real foray into social media, which shortly thereafter grew into the predominant platform for interpersonal communication, advertising and connection.

Fast forward 13 years. I invited Hillel to speak with me on my podcast, Israel Unfiltered, to talk shop about online marketing, the power of Israeli innovation and the challenges that it currently faces, from diversity to terrorism.

We began by discussing the current panic surrounding the wave of layoffs affecting the hi-tech market throughout 2022. While many are concerned about what this could mean for the economy or the business sector as a whole, Hillel is unconcerned.

“I don’t really share in everyone’s hysteria, if I’m being honest. Obviously, layoffs suck; I was laid off from my first job — that is not pleasant,” he recalled. “But if you look at the wide picture, in the grand scheme of things, Israel was always extremely conservative when it comes to valuation. So the same company that’s worth, let’s say $50 million here, if they get on a plane and fly 15 hours to San Francisco, that same company is worth 10 times that.”

“Over the years, Israeli entrepreneurs grew extremely frustrated that their companies are worth less here. But now in an ironic twist of events the [business] world is suffering and everyone’s doing down rounds because they raised at insane valuations that were not in any way justified by their revenue… and we’re actually in better shape than most other ecosystems,” he said.

Later, we moved on to discuss the incredible emergence of Israel as a hi-tech power, despite its circumstances. “We’re a country smaller than the size of New Jersey in the worst neighborhood and most unstable region on planet Earth. And really, no matter how you want to analyze this ecosystem, there’s something remarkable going on here,” Hillel said. “If you look at the capital flowing into Israel… the numbers are insane. Capital is flowing in because this is where it’s all going on. If you look at the quality of that capital, it’s even more interesting, because you’re gonna have a really hard time finding any tier one VC in the United States that has not set up shop in Israel.”

Hillel also emphasized the remarkable tenacity of Israel’s hi-tech sector, which has managed to become a global tech leader while also defending itself from a plethora of threats, including recurring waves of terrorism.

“You’d think that the more terror is going on, the less innovation there’d be because we’re scared and trying to survive, but it’s actually the opposite. As you see terror increasing, you see innovation in Israel increasing, which is fascinating,” he said. “This is actually a concept that we see in the Old Testament: when the Jews were in Egypt, the Torah — in the verses itself, not commentary — says, ‘the more that Egyptians oppressed the Jews, the more they reproduced,’ literally, black on white.”

“This is something in our DNA: we’re always in survival mode, we can’t just sit back and chill. It doesn’t work that way,” Hillel said.

About the Author
Yoel Israel is a digital marketing and real estate investor, with a passion for liberal Zionism. Yoel provides an out-of-box perspective and unique interviews about Israelis in the culture. Yoel lives with his wife and daughters in Pardes Chana. He is the founder of WadiDigital.com, Cyfluencer.com, and IsraelUnfiltered.
Related Topics
Related Posts
Yoel T. Israel