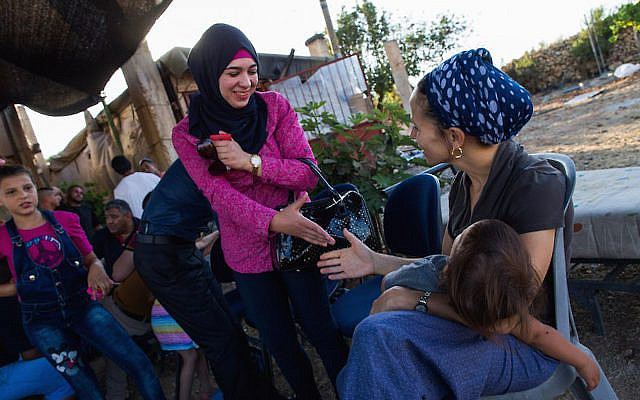 Jewish Israelis and Palestinians at a coexistence meeting in the West Bank. (Nati Shohat/Flash90)

In his speech inaugurating the 35th Knesset, Israeli Prime Minister Benjamin Netanyahu told the gathered crowd that annexation “won’t distance us from peace, it will bring us closer.” You could almost hear the guffaws of anti-annexation advocates in Israel and across the ocean in America. As one pro-peace NGO head tweeted, “A disgrace like this has never occurred.” But was Netanyahu’s statement so absurd?

The Israeli plan to extend sovereignty to portions of Judea and Samaria this summer is seen by many as the death knell of any possible peace between the Israelis and Palestinians. The fear is that by taking 30% of the land Palestinians claim their own, Palestinians will act violently (as racist a thought as one could have), the Palestinian Authority will disband or that the Democratic and Jewish nature of the State of Israel will be threatened. Above all, any hope of rekindling the 30 year old failed Oslo project will end.

These fears are understandable. For thirty years all anyone has heard is that to end the Israeli-Palestinian conflict two states must be established side by side. The Palestinian State must be established on the entirety of the West Bank, including East Jerusalem, and anything less is an injustice to the Palestinians and will be rejected by their leaders. These voices have become the loudest – but they’re mistaken.

Israel’s plans will be in accordance with the Trump Peace Plan. As American ambassador to Israel David Friedman wrote, although critics of the Trump plan want the United States to reject any action the Israelis take in furtherance of the Trump vision unless the Palestinians agree, that approach was taken for 53 years and led nowhere. Giving the Palestinians a veto on progress guarantees stagnation and violence.

The Trump vision provides for a two-state solution. The Trump administration is the first and only administration to have obtained Israel’s commitment to negotiate based upon specific terms, conditions and territorial dimensions that would lead to the creation of a Palestinian state with double the geographic footprint they enjoy now. The vision gives Palestinians a clear path to statehood and a huge influx of economic investment that would allow them to live independently with peace, prosperity and dignity. All of this, along with Israel extending sovereignty to the parts of Judea and Samaria that are barely populated and include very few Palestinians. Under any agreement these lands would end up under Israeli control anyway.

Our question remains unanswered, how does annexation lead to peace? If the Palestinians come around to the benefits available to them under the Trump plan, the answer is obvious. That being said, it is rare to find serious people who think that the Palestinians would agree to a deal in the next decade or two. The Trump Peace plan sets conditions on the Palestinians that almost all consider unachievable by the current rejectionist Palestinian culture. As Palestinians refuse to negotiate and Israel responds in kind, the more likely scenario is that a Palestinian State won’t be established in our lifetimes. Yet, the lack of a Palestinian State doesn’t mean that peace is unattainable.

In 1948 when Israel gained its independence, it inherited 200,000 Arabs who were hostile to its new government. Israel didn’t accept these Arabs as citizens for years because they feared their hostility. Yet these Arabs came to first accept Israel, then participate in Israel’s democracy and today two million Israeli Arabs, 20% of Israel’s population, play a role in the country.

There’s a way to go until Israeli Arabs are as equal off paper as they are on paper, but each year takes us closer to that goal. In poll after poll Arab Israelis reject living in an independent Palestine. While they might not be hosting Yom Ha’atzmaut celebrations, they prefer living in Israel to a possible Palestinian state. Although Israel isn’t planning on extending sovereignty to all of Judea and Samaria, if Israel would apply sovereignty to all of Judea and Samaria they can create a pathway to citizenship for the Palestinians living there.

I believe, like their Israeli Arab neighbors, Palestinians can get to a point – eventually – where they prefer living as Arab Israelis. To accomplish this task, Israel would have to take gargantuan steps, but Zionism is all about turning dreams into reality – our own and other people’s as well.

I believe we can do it.