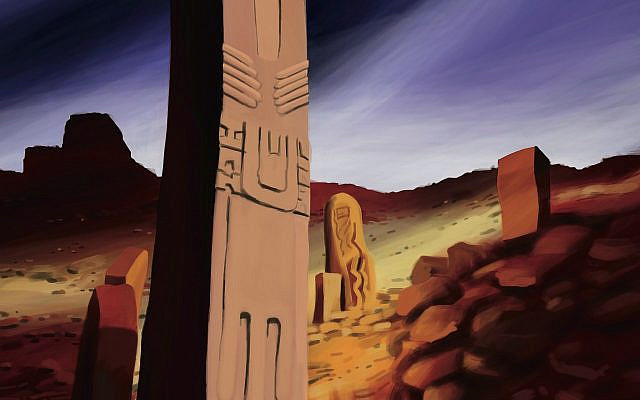 The megaliths at Göbekli Tepe were erected by hunter-gatherers around 9000 B.C. Illustration by Jorge Colombo

If you think you’ve already known the most mysterious places in the world, you might want to think again for there is an enormous complex composed of stone pillars unearthed in Turkey that baffle archaeologists up to this day. This place has been called Gobekli Tepe and its existence has been dated back as far as the Stone Age when people were not yet supposed to have metal tools, cities, and agriculture. Or so we think? Archaeological findings have even shown an impressive array of artistic skill that people should not be able to create almost 12,000 years ago. Gobekli Tepe is an archaeological discovery that is filled with mystery.


Gobekli Tepe is located in the Southeastern portion of Turkey. It presents a manmade hill of stockpiled layers. The lowest part showcases the most baffling and the oldest date of construction, dating back to 10,000-11,000 B.C. This period is way before the introduction of writing, wheels, and metal tools. There is a 6,000-year gap before all of these were previously introduced. There goes the most mind-boggling question of all, “How did ancient builders come up with this construction?” The huge stone pillars have artistic designs. These pillars’ weight ranges from 11 to 22 tons. Hundreds of people were required to move them from around 100 to 500 meters of the complex.

Enormous stones can be seen arranged in a circular pattern with 8 upright pillars each. A pillar is made up of 2 stones that create a T-shaped form. The usual pattern showcases 6 pillars connected to low walls set around the circumference. There are also 2 higher pillars positioned at the center. Pillars reach up to 16 feet tall and the diameter of the rings reach 65 feet. There have been around 200 pillars unearthed in Gobekli Tepe to date.

Archaeologists have already discovered Gobekli Tepe as far back as the 1960s but it was mistaken for a medieval cemetery. Only in 1994, when a German archaeologist named Klaus Schmidt did the true mystery of Gobekli Tepe truly came into light. The “re-discovery” of Gobekli Tepe has been on-going ever since. Klaus Schmidt became particularly interested in the rounded shape of old Potbelly. He claimed that only man can create this. He assessed it to be as dated as far back as the Stone Age and then focused on unearthing this place even more.

Among the most startling discoveries is that hunter-gatherers were most likely to have lived in Gobekli Tepe instead of builders. This discovery has questioned the age-old theory that only a society with the basic organization can come up with this kind of construction or a complex even. Conventional archaeological knowledge is now being questioned by the mere discovery of Gobekli Tepe.

The Impact of 2 Israeli Archaeologists

Two Israeli archaeologists, Prof. Avi Gopher and Gil Haklay, from Tel Aviv University, recently published a new study in the Cambridge Archaeological Journal. Haklay exclaimed, “The findings that we have suggest that the construction started at some point in the Pre-Pottery-Neolithic-A, about 11,500 years ago, but a second layer dates back to PrePottery-Neolithic-B which probably lasted until 9,000 years ago.”

The discovery of Haklay and Gopher suggests that Gobekli Tepe was a construction project that was way more complex than first imagined. The planning approach of the whole complex was supposed to be impossible during those times. The Israeli archaeologists found a startling feature on the site. They revealed a previously concealed geometric pattern. This is particularly an equilateral triangle and this underlies the whole architectural plan. Prof. Avi Gopher and Gil  Haklay imply that the three circles were already planned as one single unit and even built during the same period.

The astonishing finding is that builders of Gobekli Tepe already had some understanding of geometric principles and had applied them to their construction plans. Archaeologist Gil Haklay, who worked as an architect before, utilized a method known as architectural formal analysis to understand the planning principles used by the settlers and builders of Gobekli Tepe. The findings already confirm previous research by Gopher and Haklay that architects from the Neolithic period did not just build shelters haphazardly but already applied rudimentary geometric principles with the help of their own measurement methods.

Up to this day, Gobekli Tepe is a mind-boggling discovery. The conventional wisdom on archaeology, civilization, arts, and engineering is now being taken a second look. That is how important Gobekli Tepe has turned out to be.

About the Author
Michael Peres is a software engineer, radio host, full-time traveller, writer, consultant, serial entrepreneur and the pioneer behind the Breaking 9 To 5 business model. At a young age, Mikey Peres was diagnosed with ADHD and other learning disabilities. Over the years, he’s managed to develop his own unorthodox methods of functioning, which have inspired his current lifestyle. Moreover, his lifestyle has inspired an entire movement helping others take control of their own future and do the same.
Related Topics
Related Posts
Comments