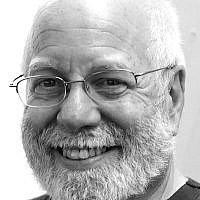 The Blogs
Jerome E. Fischer
Apply for a Blog
Please note that the posts on The Blogs are contributed by third parties. The opinions, facts and any media content in them are presented solely by the authors, and neither The Times of Israel nor its partners assume any responsibility for them. Please contact us in case of abuse. In case of abuse,
Report this post.

Since the Nation-State law was passed by the Knesset it has already under fire by the Anti-Defamation League, the American Jewish Committee and both the Reform and Conservative movements. And the Jewish Federations of North America (JFNA) issued the following statement:

“As strong supporters of Israel, we were disappointed that the government passed legislation which was effectively a step back for all minorities.”

My personal background will perhaps help you understand my profound disappointment with and strong opposition to the Nation State Bill that the Israeli Knesset passed by a majority of 62 out of 120 members.

I grew up in Washington Heights, NYC, in a “mixed” family. My paternal grandfather was orthodox, the Cantor/Reverend of the Olive Street Shul in New Haven and one of the founders of the Jewish Home there before he moved to NYC where he opened a wedding chapel. My father was a leader of the Conservative Congregation, Beth El, on 178th Street and Ft. Washington Ave, where I and my brother became Bnai Mitzva. My maternal grandmother was a secular Yiddishist, and all her children were Socialist Zionists, two of whom made Aliya, and one helped establish a kibbutz, Sasa, in the upper Galil.

I tried to follow both paths. As a member of Hashomer Hatzair I went to the Institute for Youth Leaders from Abroad in Jerusalem and on kibbutz from August 1966 – July 1967. I studied in Jerusalem and went to the tisch of a Rabbi in Katamon on Friday nights. On Shabbat afternoon I went to soccer games in Katamon.
Just prior to the Six Day War I was at Kibbutz Amiad on the border with Syria and helped build its underground garages. I was given a bolt action rifle, a “Czechi” and assigned a defensive position on the perimeter of the kibbutz. I ignored my parent’s pre-war pleas to return to America but went to Kibbutz Revadim in the center of the country just before the war started and dug trenches outside our cabins. Used them just once. Saw our triumphant and our shell-shocked Kibbutz members return from the war.

In my 34 years in eastern Connecticut as Federation Executive Director I have brought countless Missions to Israel. Through our Partnership projects I have developed close friendships with many Israelis, particularly in Afula/Gilboa. Many of them are Arab Israelis. Some are Circassian.

Here is the key portion of Israel’s Declaration of Independence:
The State of Israel will be open for Jewish immigration and for the Ingathering of the Exiles; it will foster the development of the country for the benefit of all its inhabitants; it will be based on freedom, justice and peace as envisaged by the prophets of Israel; it will ensure complete equality of social and political rights to all its inhabitants irrespective of religion, race or sex; it will guarantee freedom of religion, conscience, language, education and culture; it will safeguard the Holy Places of all religions; and it will be faithful to the principles of the Charter of the United Nations.

The problems are obvious:
The Nation-State Law refers to both the land of Israel and the State of Israel. Is it meant to preclude any possible Palestinian State?
The Declaration of Independence “will foster the development of the country for the benefit of all its inhabitants; it will be based on freedom, justice and peace as envisaged by the prophets of Israel; it will ensure complete equality of social and political rights to all its inhabitants.”
The Nation-State Law seems to elevate the rights of Jewish Israelis above the rights of other Israelis.

President Franklin D. Roosevelt, in his Inauguration address of 1933, in the depths of the Great Depression said:

“…let me assert my firm belief that the only thing we have to fear is fear itself—nameless, unreasoning, unjustified terror which paralyzes needed efforts to convert retreat into advance.

This law was passed out of fear, and through blackmail. The fear is of a fully integrated Israeli society, with many more cities becoming mixed Jewish-Arab cities. That fear is being expressed in concrete and sometime ugly ways in our Partnership city Afula. The blackmail was from the extreme right wing and religious factions of Prime Minister Netanyahu’s government, who threatened to bring down the government if he did not support the bill. Those factions are the same ones who insisted that he abrogate the agreement drafted to share the Western Wall with all streams of Judaism.

The bill was endorsed by a Prime Minister who is under very active investigations for a variety of crimes. It was enacted despite the vigorous efforts of many, Israelis and Americans, to avert its enactment. And it is now being vigorously protested in Israel and in America. It was, as the JFNA statement says, “a step back”, and it must be reversed. Israel must march into the future without fear and without the political blackmail of the extreme segments of its population.

As I said to several of my non-Jewish Israeli friends who protested and lamented that they were not “Class B Israelis”: No, you are not!
And Israel will eventually reverse this law because it is not a class B nation.

About the Author
Jerry Fischer is the Executive Director of the Jewish Federation of Eastern Connecticut. He was from his teenage years onward an active Zionist. He is involved in promoting Arab-Jewish cooperation in the Afula/Gilboa area.
Related Topics
Related Posts
Comments