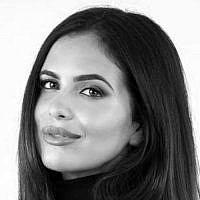 The Blogs
Jordan Royt
Apply for a Blog
Please note that the posts on The Blogs are contributed by third parties. The opinions, facts and any media content in them are presented solely by the authors, and neither The Times of Israel nor its partners assume any responsibility for them. Please contact us in case of abuse. In case of abuse,
Report this post.

With the international success of Israeli shows, Fauda, The Spy, and now Tehran, one wonders what is the appeal specifically in Israeli thrillers. I myself was hesitant to watch; beginning one of the series’ is like opening pandora’s box of suspense, panic, and restlessness. All three productions are far more complex than the political thriller I confine myself to watching. They’re so far from a Hollywood script. Then again, Israeli life is an example of truth being stranger than fiction.

The storylines clearly illustrate the dichotomy of its citizenry: a life of typical normalcy or matter of life or death patriotism. Israel is a nation often struggling with its own morality- a drive to dominate the opponent in a hostile neighborhood challenged by the Nefesh Yehudi (Jewish Soul) yearning above all else to be seen as supremely humanitarian and a just democratic society. Nevertheless, the productions are united by the common theme of unparalleled patriotism, a pillar of Israeli identity.

The effervescence of Israeli patriotism is virtually impossible to ignore throughout these series’, and highlight Zionism as a manifestation of the longing to retain historical legacy, as opposed to a vicious agenda of imperialism that much of western liberalism denotes it as. Directors of the shows skillfully introduce the humanitarian facet to an ideology mainstream media attempts to smear. By illustrating the varying costs for the national population, viewers are encouraged to recognize that patriotism is ingrained into the psyche of the citizenry by virtue of ancestral endowment, and the pursuit of historical justice is a humbling realization, not a conscious choice. With the juxtaposition of personal challenges at home and tunnel vision on the frontlines, the ethos of the characters —  all-encompassing of the daily-lives of typical citizens — helps one understand that political life in Israel is personal at its core.

Fauda, a three-season production centering on the missions of Mista’avrim unit, a unit comprised of undercover counterterrorism agents trained to operate in the field of their opponents, sharply focuses on the Israel-Palestine issue. With the inclusion of scenes on the homefront, one is forced to face the difficulties violent circumstances present its actors: a frequent journey away from the temporary stability of the home and back into the abyss of unpredictability. Yet, each character wears the journey as an omen to the nation. A remarkable depiction of patriotism.

Meanwhile, Tehran centers around the IDF cybersecurity unit, using a female, undercover, IDF computer hacker as the protagonist.  The protagonist is sent to the Islamic Republic — one of, if not the most, hostile states toward Israel– to prevent the Islamic Republic from obtaining an atomic bomb. Tehran investigates the nuances of the Israel-Iran conflict while shedding light on the devastating reality of the relationship between those of the Iranian diaspora and their homeland.  In essence, the protagonist vows to take up a new identity in the name of national security.

These shows are compelling dramatizations of regional politics, yet are unique to issues facing the state of Israel and the Jewish world. The Spy, by comparison, steals a tear from hearts among the global population by virtue of its focus on the dualities of life in the army, and by extension patriotism, and the struggles of instability plaguing family members behind those at war.

Eli Cohen, among others, is revered as a central figure for assisting Israel in championing the Six-Day War of 1967. Cohen, the individual which The Spy is based on, was tasked with espionage, leading a double life as an Israeli father, husband, son and brother, and a fictional scion of the Syrian diaspora. Through unmatched courage and skill, Cohen managed to infiltrate the Syrian army, obtaining the role of Chief Advisor to the Syrian Defence Minister from which he relayed internal military information back to his homeland. While his de facto biography explored his life in Syria, it pays equal attention to the familial costs of his patriotism. His wife Nadia is of parallel importance in the story. Delving into her daily life navigating motherhood independently from her husband, alongside the perpetual unknown of her husband’s whereabouts and activity is a circumstance all too familiar for women across a nation with conscription, and wives of the military worldwide.

I recall my mother telling me a story of my pregnant grandmother during the Yom Kippur War of 1973. Packed in urban apartment complexes, each resident would pray that sounds of soldier’s boots would remain echoes down the hallway as opposed to a clap of thunder at their doorstep. During those unfortunate times, everyone knew what a knock on your door meant for the future of your family.

Nadia Cohen, among thousands of other women, men, and children were those whose lives were changed with a knock on the door, symbolizing the reality of giving up a life for the prosperity of the nation and its legacy.

The shows reveal intricacies of strength and sacrifice, but love for the nation, and the nation’s history, is triumphant. While personal sacrifices are commonplace, especially when it comes to the pillar of the family in Jewish life, these realities demonstrate a person-nation relationship unique to Israel. The nation as a whole is a family; a population with a shared history of oppression, a shared goal of greatness, and a shared responsibility of protection. This is the nature of Israeli patriotism, and shows like the aforementioned bring these dynamics to the forefront.

Each production explores incredibly innovative missions and manifestations of patriotism. But, Patriotism reaches far beyond the military uniform; It’s the average citizen living in the absence of a loved one, yet understanding the responsibility they carry. For soldiers and citizens alike, patriotism is sacrificing one’s desires, all incumbent of potential guilt, regret, and fear, in exchange for bearing the costs of battle for the greater good.

The nature of Israeli patriotism is the perfect vehicle in understanding the realities of a world battling the ill of conflict.

About the Author
Jordan Royt is an undergraduate student at McGill University and a visiting student at Columbia University. She is a writer and editor for International Relations Journalism pertaining to the Middle East at a number of publications, both print and online, at McGill and beyond. Her interests include the intersection of religion and politics, how historical legacies influence our current realities, and terrorism and insurgency in the Middle East.
Related Topics
Related Posts
Comments