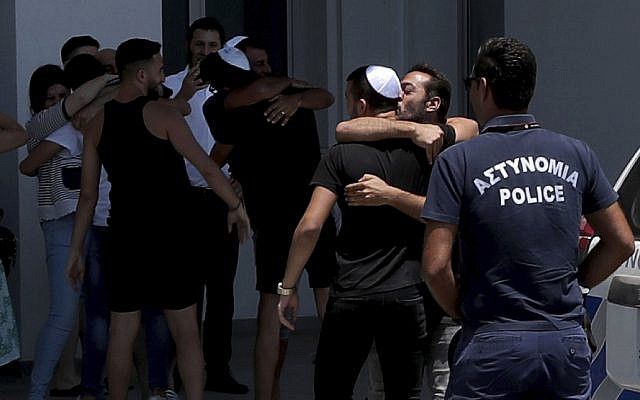 An Israeli teenager is embraced by relatives after being released from Famagusta police headquarters in southeast town of Paralimni, Cyprus, in July 2019. He and 11 other Israelis were accused of raping a British girl, but were let go by the courts in Cyprus. (AP Photo/Petros Karadjias via Jewish News)

It’s a hop and a skip from Tel Aviv to Larnaca, Cyprus, and then a bus ride to Ayia Napa, the holiday resort of choice for teenagers from all over Europe.

For a scarcely noticeable 40 euros a night, it’s possible to check in to the cheapest, crummiest accommodation, complete with stained floors, barely clean bedlinen, and open doors to every room, all the better to drink and party in.

And in this hormone – and alcohol – filled atmosphere, last summer, a British teenager says she was raped by a group of 12 Israelis, filmed by them, held down by them, while one after the other entered room 723 of her hotel.

Last week, the young woman was found guilty of the crime of “public mischief” by first claiming rape and then retracting her statement. She and her lawyers from the campaign group Justice Abroad say that the Cypriot police forced her to withdraw her allegation.

Whatever happens this week, the case raises more questions than answers, not least in the extraordinary and surely indefensible behaviour of the Israelis.

Twelve of them were arrested initially and then released, returning to Tel Aviv to cavort about the airport with their families, whooping and cheering, wearing white kippot and dancing under a hail of confetti. These were the “heroes” of Ayia Napa, never properly questioned by the Cyprus police and, at a minimum, not even obliged to take part in a line-up so that they might be identified – or not – by their British accuser.

None of the young men – who apparently include a professional footballer – has expressed any remorse about what went on in Cyprus last July.

Instead, they have exhibited a somewhat sickening air of entitlement and victimhood. One of the arrested Israelis, Yona Golub, even gave an interview to the Daily Mail in which he says he is going to take the British woman to court for compensation, saying she has “turned his life into a nightmare… we deserve compensation for what we went through. They need to put her in prison”. He’s not sure, incidentally, about how much he’s claiming, just that she should be imprisoned first and then the money can be worked out later. It’s almost laughable, if it weren’t so awful.

A number of theories have been advanced as to quite why the Cyprus police were so anxious to have the British woman retract her statement about the rape: some say it is because Ayia Napa is so dependent on the vast numbers of sun, sangria and sex tourists that they can’t afford to have such an allegation associated with the resort.

Others say the political pressure comes from higher up. Observant readers may have noticed that last week, before cutting short his break to deal with the fall-out from the Soleimani assassination, Israeli Prime Minister Benjamin Netanyahu signed a three-way energy deal with the governments of Greece and Cyprus, for Israeli gas to be delivered to Europe via an undersea pipeline. What could possibly put the mockers on such an arrangement? Twelve Israeli men on trial in Cyprus is a credible bet.

This is a disgusting case and Israel’s government would do well to consider its implications. A good start would be to hold its own investigation into what the Israeli men did or did not do; and perhaps to limit their career options in the army until such an inquiry has been concluded.

At the very least, it might be time to make pre-army trips to places such as Ayia Napa unaffordable, even for privileged Israeli teens. And a little humility wouldn’t go amiss, either.