The Blogs
Libby Lenkinski
Apply for a Blog
Advertisement
Please note that the posts on The Blogs are contributed by third parties. The opinions, facts and any media content in them are presented solely by the authors, and neither The Times of Israel nor its partners assume any responsibility for them. Please contact us in case of abuse. In case of abuse,
Report this post. 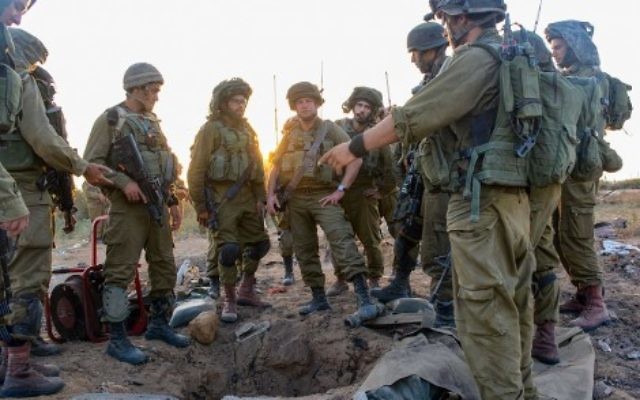 Last week, a bill that would impose up to 10-year jail terms for anyone who distributes video or audio footage of IDF soldiers advanced in the Knesset. The MK who sponsored the bill reasoned that the damage to fundamental democratic freedoms was worthwhile, for the sake of protecting the military’s apparently fragile “morale.”

The bill was so extreme that even some right-wing stalwarts would not get behind the version as introduced. The attorney general warned that it conflicted with Israel’s Basic Laws; the Knesset legislation committee’s legal adviser said it was impossible to enforce. The New Israel Fund came out forcefully against the proposal, as did many Israelis who care about Israel’s democracy.

According to media reports, the coalition has no intention to pass the bill it officially endorsed, but rather intends to amend it so that it will focus on filming as an element of “obstructing a public servant,” and triples the penalty for this offense when soldiers are the public servants in question.

Some commentators, including in The Times of Israel, have attempted to explain away the episode by claiming that it was just a publicity stunt for the MK that proposed it in the first place, that he didn’t really mean for such obviously odious legislation to pass — and, therefore, anyone who wasted breath coming out against it must not really know how politics are played.

This analysis is stunningly naïve. Those of us who care about the fundamental freedoms that make up the foundation of any democracy, including Israel’s, are right to be outraged. We know that introducing extreme legislation is part of the right wing’s legislative strategy, which has already effectively unraveled elements of Israeli democracy that many of us felt were immutable.

In the days following the election of President Trump, the writer and former Russian dissident Masha Gessen, who witnessed her country’s emergent democracy wrested away by authoritarian politics, warned Americans that we should look our situation squarely in the face, and refuse to lull ourselves into thinking things won’t be so bad. “Believe the autocrat,” she wrote. “Whenever you find yourself thinking, or hear others claiming, that he is exaggerating, that is our innate tendency to reach for a rationalization.” Believe the autocrat.

Creating chaos is part of the playbook employed by Prime Minister Netanyahu and other rulers who are intent on remaining in power by destroying their country’s democracies. If those of us who are working to defend democracy do not take these politicians at their anti-democratic word, then we have forfeited the game — and our future.

Though it seems difficult to remember now, in 2010, it seemed unimaginable, even ridiculous, that Israel would begin to use political litmus tests to decide who can and cannot enter the country. At the time, I was working at the Association for Civil Rights in Israel (ACRI), the central organization fighting anti-democratic legislation. And while we took the threats seriously, we had faith that there were some lines that just would not be crossed. The Netanyahu government may take issue with its critics, but Israel is a democracy, and democracies weather political disagreement and respect the right to dissent, citizen and visitor alike. Border control was for safety, not politics.

So when I heard that year about a bill that proposed making it a civil offense for an Israeli to support a boycott of any Israeli company for any reason — including businesses operating on in the settlements — and that would allow the government to impose a 10-year ban on any foreigners from entering the country if they supported such a boycott, I thought it was an over-reach. My colleagues and I in the human rights field were incredulous: surely, this couldn’t ever pass. People all over the world spoke up against it — understanding that such a measure would cross a dangerous moral line for any democracy.

But it followed the extreme right’s cynical formula to a tee. The strategy goes like this: once the shock of the outrageous initial proposal fully sets in, the sponsors will grudgingly agree to tone down the bill slightly. Then, MKs and ministry officials will promise for a very limited and narrow implementation — nothing to worry about. The centrists will decide they have enough cover to support it and the bill will pass.

This is effective because it uses the cognitive psychology of “anchoring,” a concept described by Israeli psychologists Amos Tversky and Daniel Kahneman. (In addition to winning a Nobel Prize for his research with Tversky, Kahneman sits on the New Israel Fund’s International Council.) The politicians use anchoring by setting up an extreme initial idea, to which every subsequent iteration will be compared. Even scaling back just a bit suddenly makes the proposal seem exceedingly reasonable when compared to the original version, no matter how little it has actually changed or how outlandish the original tenets were. It’s a brilliant tactic for the morally bankrupt politician looking to make “friers” (suckers) of the Israeli public.

The final stage of this strategy comes a few months later, sometimes even a few years later, when the politicians introduce new legislation that fills in the gaps of the fanatical fever dream that did not end up in the final bill the first time around. By then, it is no longer a new idea, and since we cannot maintain our sense of shock indefinitely, provisions we never thought would even merit consideration in Israel’s legislature end up as the law of the land.

When the “Boycott Bill” was first introduced in 2010, most Israelis, including lawmakers from the Left to Center-Right, were shocked. But slowly, the bill’s sponsors softened certain provisions — the part about foreigners entering the country was dropped, for example — and, in 2011, the bill passed.

“Woe betide the Jewish democratic state that turns freedom of expression into a civil offense,” warned President Reuven Rivlin, then speaker of the Knesset, who can hardly be accused of being a boycotter, in a rare op-ed after the bill passed, “and woe betide Knesset members who hoped to produce good grapes, but instead produced rotten fruit, to paraphrase the words of the prophet Isaiah. Not only does the legislation not provide democracy with an effective tool with which to cope with the boycott problem, it also threatens to catapult us into an era in which gagging people becomes accepted legal practice; an era in which the democratic-constitutional boundary line falls victim to acts of legislative infraction.”

In the years since, President Rivlin’s warning has proven disturbingly prescient.

Last year, the Knesset voted to amend the Entry into Israel Law to include provisions that were left on the cutting room floor in 2011: a ban on foreigners who support a boycott, including a boycott of settlement products, from entering the country. The bill is already being used to target academics, human rights researchers, and advocates. Many of them hold dissenting opinions; some of them hold views with which I, and the New Israel Fund, vehemently disagree. None of this makes the law any less wrong, any less harmful to Israeli democracy, or any less ominous for Israel’s future.

Gessen, who had seen these tactics firsthand in Russia, advises us to maintain our sense of outrage, no matter how far the government goes beyond our moral lines. “In the face of the impulse to normalize, it is essential to maintain one’s capacity for shock,” she writes. “This will lead people to call you unreasonable and hysterical, and to accuse you of overreacting. It is no fun to be the only hysterical person in the room. Prepare yourself.” It is not only politically savvy to take these extremist bills seriously each and every time they are proposed. It is our moral duty in the face of an extreme right wing that is intent on dismantling Israel’s democratic structures.

If we do not speak up each and every time, we become part of the problem — complicit in our own undoing. Israelis have a responsibility to fight for our democracy. I owe it to my nieces who are growing up in today’s Israel, as we owe it to all of our children, to ensure that their inheritance, and our legacy, is a society that lives up to its greatest ideals and highest moral standards. It is never naïve to speak truth to power, even if we have to do it every day — every hour. We will do it for as long as it takes. Our voices are not tired.