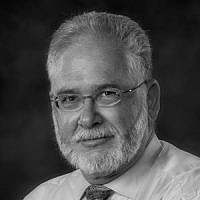 The Central Bureau of Statistics’ (CBS) recent release shows that while the Jewish population in Israel is growing, the number of couples that marry under the auspices of the Chief Rabbinate is significantly and consistently dropping! 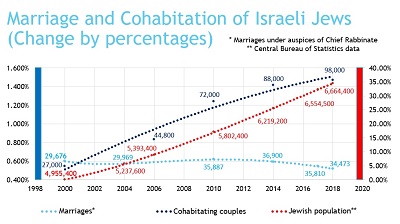 The graph Hiddush created on the basis of the Central Bureau of Statistics multiple data sources illustrates that Israeli Jews “vote with their feet” and choose to keep away from the Chief Rabbinate and refrain from marrying there, even though this is the only legal venue for marriage of Jews in Israel. Rejecting the Rabbinate and denied legal civil, non-Orthodox, and more egalitarian Orthodox marriage alternatives – there is a substantial increase in the number of Jewish couples that choose to cohabit without marriage:

CBS data also indicate a 360% increase in the number of Jewish couples choosing to live in cohabitation without marriage since 2000, and the increase has been especially dramatic since 2016.

This reality stands in sheer contrast to the continued boastful and vain statements of the religious establishment that is holding on to its monopoly and won’t let the facts confuse it. For instance, in an interview last week, the outgoing executive director of the Chief Rabbinate said [Haderech, August 6, 2020]:

The Chief Rabbinate is naturally at the center of tensions in religion-state relations. And unfortunately, there are various entities that try to harm the status of the Rabbinate and undermine it, which receive disproportionate media backing… To my delight, despite the loud noise that those actors make, the public votes with its feet. 98% of the public marries via the Rabbinate and not in all kinds of other ways… These are the facts. Everything else is spin and hollow headlines. The people of Israel are a wise people and they want true Judaism, rooted, in the way we received it from our ancestors.”

As can easily be seen from the CBS data – the Rabbinate is quickly losing the Jewish public, and this is compellingly validated by Hiddush’s ongoing polling of public opinion and surveys done by other public entities such as the Israel Democracy Institute. Only the monopoly they enjoy thanks to Israel’s cynical political circles, which denies the public of legal alternatives, prevents their move into total irrelevance. In the meantime, they, ironically, undermine the institution of family and marriage in Israel by preventing marriage options outside the Rabbinate.

We closely monitor the issue of marriage freedom in Jewish public opinion in Israel, and Hiddush’s polling reveals time and time again that a large majority [about 2/3 of Israel’s Jewish public] supports freedom of choice in marriage in Israel and equal state recognition of civil and religious marriages of all denominations. Furthermore, half of Israel’s Jewish public would have preferred to marry outside the auspices of the Chief Rabbinate if it was given an alternative choice. Only about 7% would prefer cohabitation without marriage if they were offered an alternative to the Chief Rabbinate.

Reviewing the CBS data and the numerous public opinion surveys, we have but one clear call to Israeli politicians: If you really intend to represent the Israeli public – legislate freedom of choice in marriage now!